Maybe the Heisman Trophy conversation is a bit much, even for a player as talented as Ohio State star Nick Bosa.

After all, the side of the ball the junior defensive end plays on probably rules him out of the conversation before the season even starts. But when it comes to one of the most impactful players in the country, there is no question that Bosa fits the bill heading into what will surely be his final season with the Buckeyes.

Coming in with so much pressure to live up to the standard of his older brother Joey, it’s been remarkable to watch Nick Bosa go to work and not only meet the challenge — but maybe come close to topping it by the time he’s done. 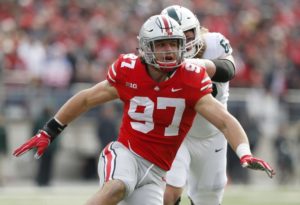 Nick Bosa already has a Big Ten Defensive Lineman of the Year honor to his credit, and it’s hard to see how he won’t defend it now that he’ll have the benefit of a heavier workload this season for the Rushmen. Statistically, Nick Bosa should be even more productive this year, not that there was anything wrong with his 16 tackles for loss or 8.5 sacks last season in that deep rotation up front for Ohio State.

But his impact also goes deeper than just the box score.

And in my first episode of BuckIQ in the Lettermen Row film room, I’m looking at just one series from last year’s Big Ten title game against Wisconsin that shows just how much of a game-changing weapon Nick Bosa can be even without necessarily stuffing the stats sheet.

Clearly he needs to be accounted for on every snap by opposing offenses, but even extra attention often isn’t enough to slow him down or keep him from wrecking the design of a play. The Badgers weren’t the only team to learn that lesson last season, of course, but even just three snaps provide a useful glimpse into just what makes Nick Bosa so special.

Will this Ohio State offense be Urban Meyer’s best ever?
Dual Threat: How Ohio State will utilize both J.K. Dobbins and Mike Weber
Advertisement