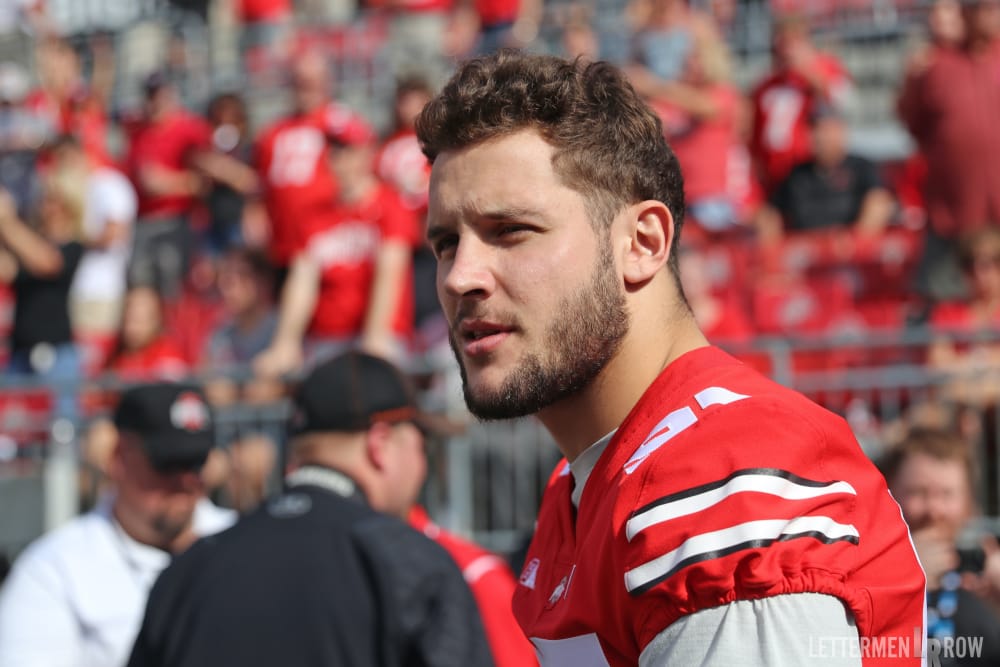 Nick Bosa was back in his jersey watching the Ohio State Buckeyes last week. (Birm/Lettermen Row)

COLUMBUS — There is no ignoring the kind of pain that comes from a core-muscle injury like the one that sidelined Nick Bosa.

The severity may not be the same in every case. But even for some of the toughest guys in sports, there is agreement that the unique shooting, stabbing feeling in the abdomen isn’t one that can just be forgotten — even years later.

“No, I wasn’t able to play through it,” former Ohio State and NFL wide receiver Anthony Gonzalez said. “It almost feels like a knife being pushed directly through your abdomen.”

A sharp pain. The inability to make normal athletic moves. And then the frustration of not being able to perform athletically is thrown on top of the stinging jabs near the stomach.

It all adds up to one incredibly uncomfortable issue, one that even talking about still seems to sting former NHL forward Jared Boll.

“I don’t know what it feels like running, but skating you couldn’t push your legs out,” Boll said. “It would just freaking burn.”

Clearly Bosa could relate as he walked gingerly toward the Ohio State locker room at AT&T Stadium last month, his third Heisman Trophy-caliber performance of the season short-circuited by the dreaded core-muscle injury. 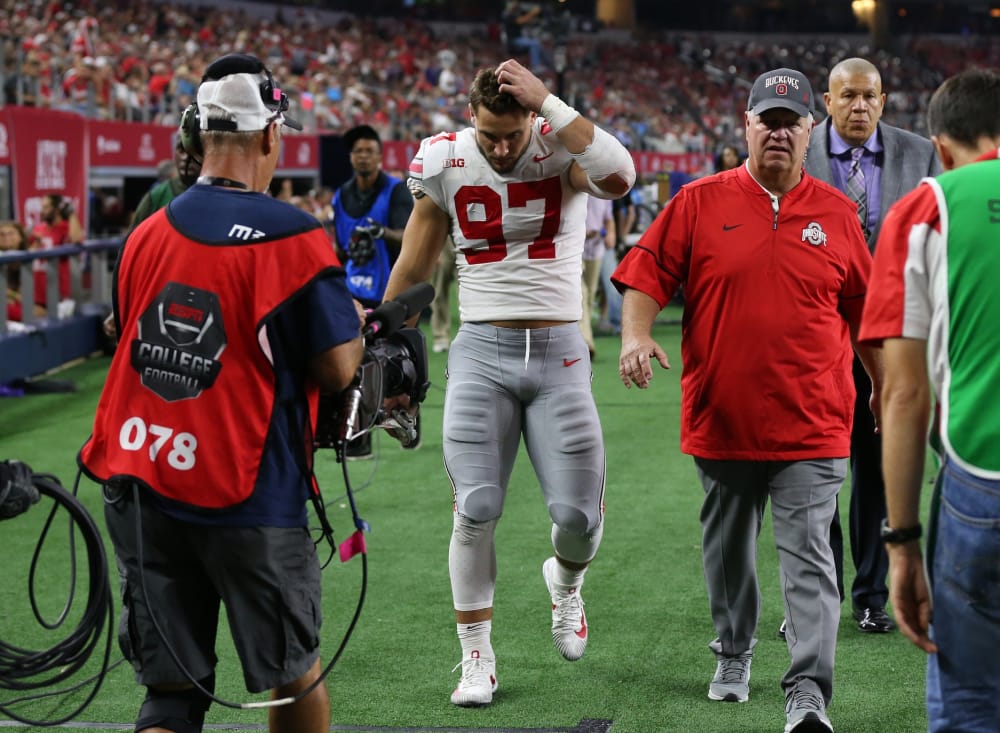 Nick Bosa hasn’t played for the Ohio State Buckeyes since the third game of the season. (Matthew Emmons/USA TODAY Sports)

Since then, there’s been little to do with Bosa except sift for clues, get a couple updates from his parents and the Ohio State coaching staff, sneak peeks at random social-media videos — and wait until the next evaluation in November.

Based on the previous experiences of guys who have dealt with the injury, combined with the accepted wisdom from Dr. William Meyers, it’s certainly not out of the question that Bosa could be back on the field in time to help the Buckeyes make a run at both the Big Ten title and a national championship. The Vincera Institute in Philadelphia performed the surgeries on both Gonzalez and Boll and countless other athletes, and the standard rehabilitation time is set at four to six weeks.

“One guy goes in, boom, boom, boom, out,” Boll said. “Next guy goes in. I saw so many football players there. When I had it done probably five or six years ago, I was up doing rehab the next day. It’s not bad at all.

“As soon as I got cleared, I didn’t feel like I was protecting it or anything. I don’t remember how long it took me, four and a half, five weeks maybe. Some injuries you come back from, you kind of protect yourself. But this one, it was like I didn’t even remember having it. I was just boom, done. It shouldn’t be something where [Bosa] is hurt all year because of it, you know what I mean? It depends on how bad the tear is, obviously, but somebody could easily be playing in four weeks.” 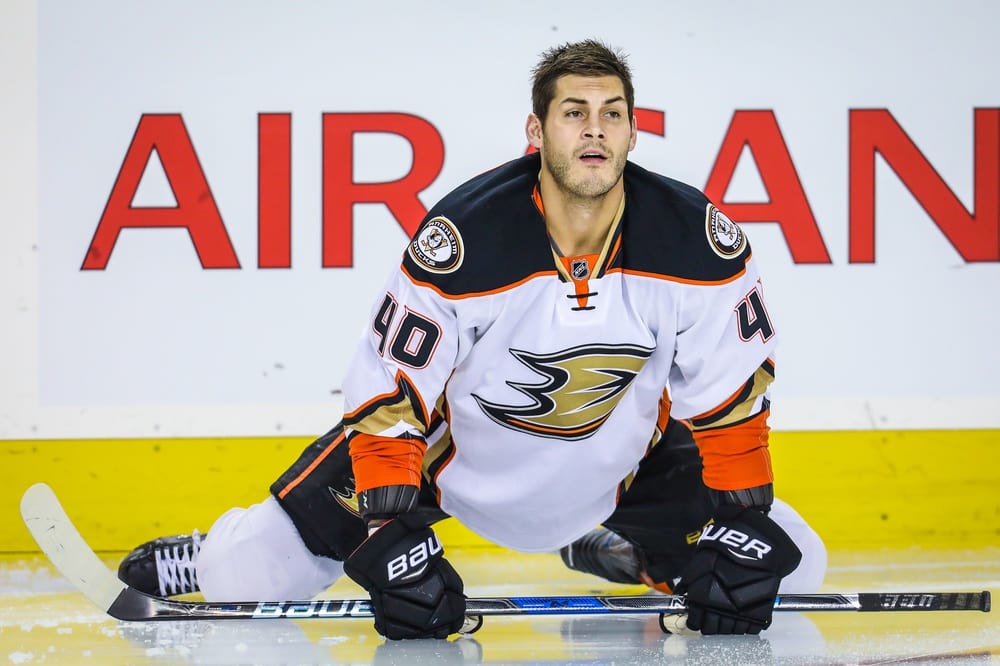 The wrinkle in the equation looming over all of that for Bosa, of course, is his stock as a potential No. 1 NFL draft pick next spring. The junior has millions of dollars on the line, and nobody will want to jeopardize that by rushing him back or potentially putting him in harm’s way too quickly.

On the flip side, Bosa has repeatedly stressed that his top goal is to win a national championship with the Buckeyes like his older brother Joey did. Nick Bosa has also now become one of the program’s most respected leaders and captains, and the pull of Ohio State’s famed brotherhood is going to undoubtedly be strong once he gets cleared.

Now back with from his surgery and rehab stint in Philadelphia, Bosa is already a fixture around the team at practices and was back on the sideline last weekend wearing his No. 97 jersey.

“We haven’t mentioned anything about when he’s going to play again,” defensive line coach Larry Johnson said. “It’s great to have him just walking around talking to guys, I think that’s the best thing he can do. I mean, you’ve got one of the guys who is a great pass rusher, a great leader, a great kid … when he talks, guys listen.

“We’re going to talk, but I’m going to listen to the father and the mother somewhere down the road. I’m going to let them make the decision with what they want to do. I’m just an ear listening. I’m giving my opinion, but I’m certainly not going to be the guy making the decision with what he does with his future. I think that’s up to the family. We just want him to get healthy, that’s the biggest thing right now and that’s the focus.”

Eventually that’s going to happen, and in most cases with this injury, there isn’t anything that should linger to hold Bosa back. 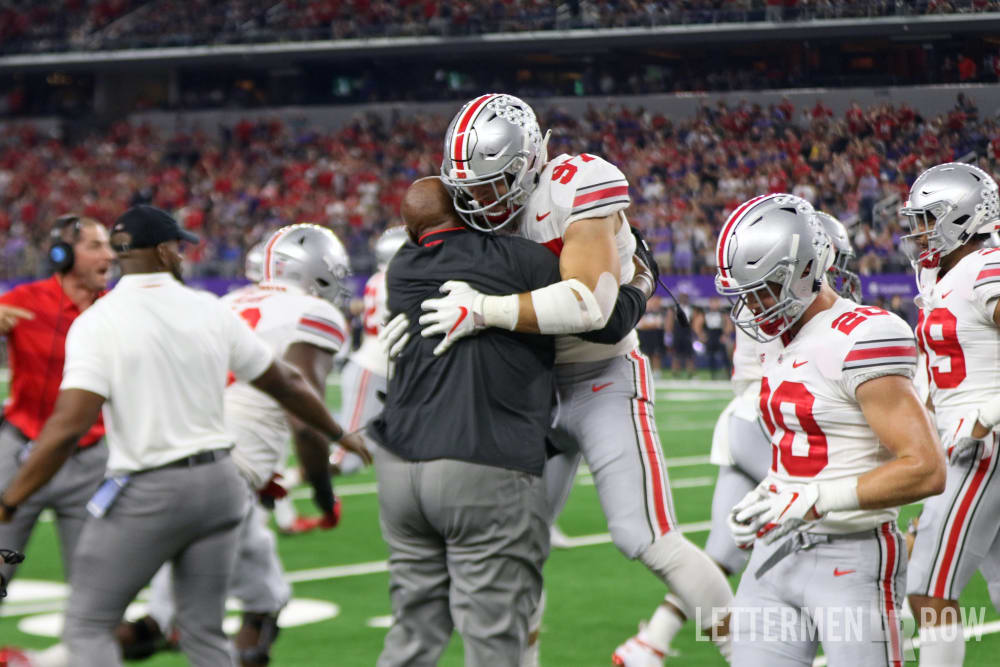 The experience for Gonzalez wasn’t exactly the most positive because hip issues prevented him from making a full recovery, but that wasn’t necessarily tied to the core-muscle surgery to fix that stabbing pain.

“At my position, I was making some pretty sharp, 90-degree cuts and running at full speed with hard breakdowns and pivots and those sorts of things,” Gonzalez said. “Anytime I got into that situation, it would really flare up.

“So, you go in and see the doctor and they schedule you the next day. It’s like any other surgery. It’s outpatient, and when you’re in the NFL or the NHL, your access to doctors is pretty unique. That’s never a problem. But then you’re kind of on your way. I had the surgery and the very next day I was back in Indianapolis trying to rehab.”

Bosa is back in Columbus.

On Saturday, the most dominant defensive player in the country will miss his fourth game when the Buckeyes are hosting Minnesota, and he’s not going to be back the following week for Purdue either. But an off date looms after that, and then the calendar will flip to November — when Bosa Watch will once again really heat up.

“Some injuries just linger on forever,” Boll said. “But with this one, as soon as I was back, I was boom, on the ice, 100 percent, good to go.

“It’s like rehabbing any injury, but I had ankle injuries that were way harder to come back from. It’s your core, and you use that for everything so you kind of have to go slow, but you can start doing stuff right away. It doesn’t take too long to get back into shape.”

The memory of that pain, though? That sticks with anybody who has been through a core-muscle injury.