COLUMBUS — There is no doubting the hunger of Nicholas Petit-Frere at Ohio State.

As for his actual appetite for food? Maybe not so much.

The Buckeyes are still heaping plenty on to the plate of the redshirt freshman to get him ready for his second year with the program, both literally with an 8,000-calorie diet and figuratively with more responsibility as a potential starter at right tackle. Keeping up at either way at this stage of the development process can be a challenge, obviously, and that work often isn’t pretty.

But Petit-Frere appears to be handling everything thrown at him just fine knowing what it might mean for his career by the time training camp rolls around for the Buckeyes.

“I went from eating maybe like 5,000 calories a day to trying to pack in 8,000 a day — which is very, very tough,” Petit-Frere said at the end of the season. “You just find time. It’s tough for me trying to figure out how to balance everything, but you just figure it out. … And I will do whatever I can to make this university better. 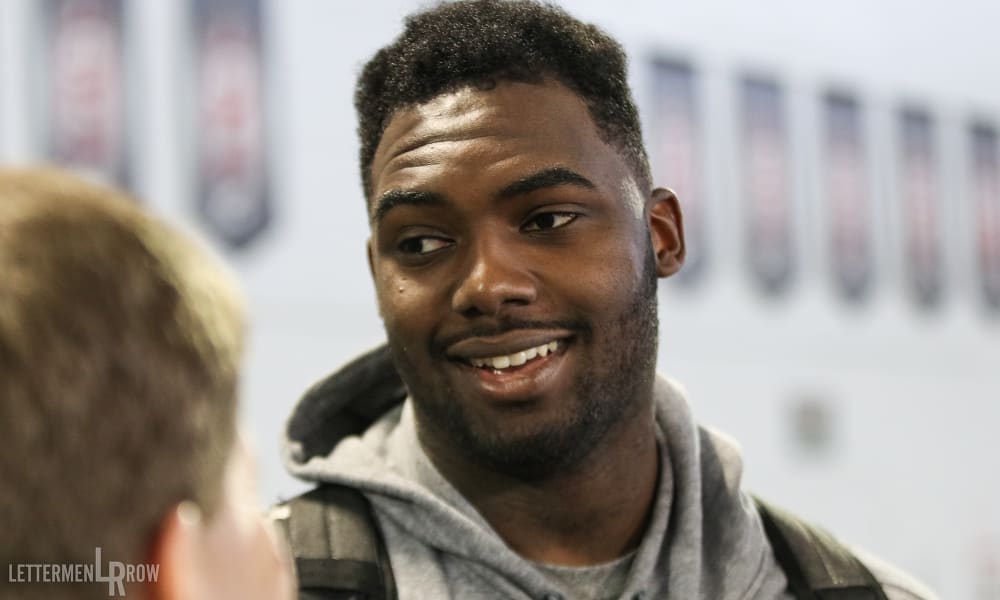 “I knew [the first year] was going to be tough, and I know I had a lot of great people around me, a lot of great players. Isaiah Prince is an amazing tackle. I knew the left tackle position was open, but we had Thayer Munford and Joshua Alabi both competing for that spot. I know Branden Bowen was also a tackle last year, too — then he got hurt, but he was coming back. There’s a bunch of great talent here and I knew it was going to be a big competition. Now I’ll do whatever I can to make this team better.”

That process is well underway for Petit-Frere, and the progress this spring was noticeable as he ended camp looking like the odds-on favorite to take over on the right side following the graduation of Prince. Clearly stronger thanks to the offseason program both in the weight room and at the dinner table, Petit-Frere appeared to be poised to tap into the five-star potential that made him such a coveted signee late in the recruiting cycle a year ago.

What makes Nicholas Petit-Frere so appealing to Ohio State as a blocker? Where are the key areas to focus on heading into his second season with the program? How difficult is it to eat all that food every day? Former Ohio State offensive tackle Reid Fragel returned to the Lettermen Row film lab to try to answer all those questions in the latest episode of BuckIQ.