COLUMBUS — Mike Weber doesn’t need to be officially named a starting running back at Ohio State.

Truthfully, neither does J.K. Dobbins.

Both are going to get heavy doses of rushing attempts. The Buckeyes are going to keep on rotating them, effectively making them 1A and 1B, with even that order subject to change on a whim. And while they might deserve first-team labels just about anywhere else, it’s the partnership the two are sharing now that is fueling the success of Weber, Dobbins and the Ohio State offense as a whole.

“I keep saying it’s a two-headed monster,” acting coach Ryan Day said. “You’ve got two guys going there that are really, really talented. … We will continue with that kind of rotation and they need each other. We need the depth.

“Sometimes [success] is just the way that the play was blocked, you know, where we got Mike to the safety a couple of times [against Oregon State]. But Mike made those plays count.” 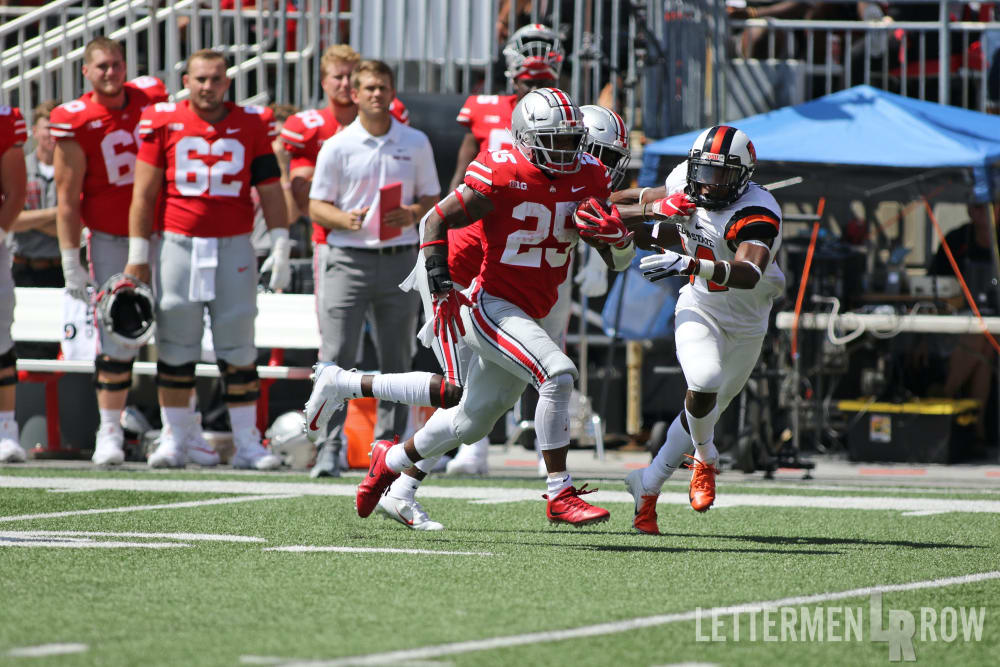 Weber’s dynamic start has certainly come as something of a surprise, although maybe it shouldn’t have since it wasn’t that long ago that he was the freshman sensation coming off a 1,000-yard season instead of Dobbins. Injuries robbed him of the chance to post the kind of breakout campaign that was anticipated of Weber last year, but it appears it was only delayed and not canceled.

Healthy and happy, Weber has been critical in allowing Ohio State to push the tempo offensively this season and leads the team with 217 rushing yards and 4 touchdowns after the first two games. The Buckeyes have found a formula that balances the workload to keep both he and Dobbins fresh, while also giving them a chance to develop a rhythm by allowing them to alternate drives. And without needing to substitute during possessions, Ohio State is able to ramp up the speed and pressure on a defense.

Of course, the Buckeyes can also throw in a change of pace that includes both running backs on the field at the same time. That package has already produced one touchdown for Weber this season, and it included some similar concepts that are setting the stage for even more success for Ohio State on the ground.

Former Ohio State standout Beanie Wells broke down a handful of those plays for his latest edition of BuckIQ. Looking at that two-tailback formation, the physical tools Weber brings to the table and a few other details about the schemes that appeal to a former NFL rusher, count Wells among those seeing plenty of positives from Mike Weber and the Buckeyes on film.