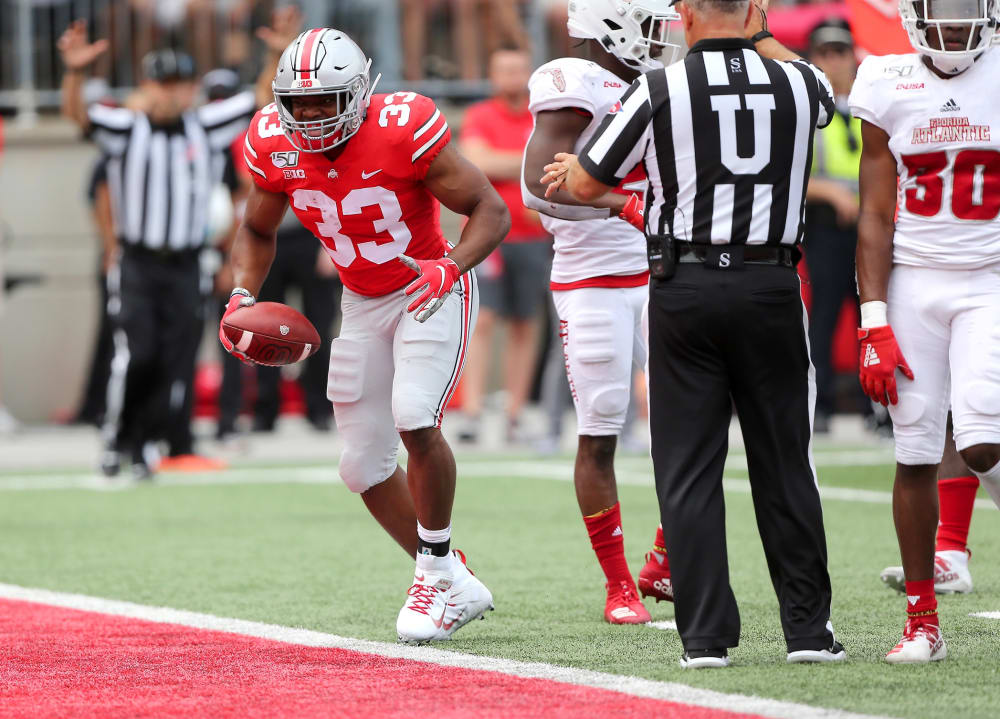 Ohio State running back Master Teague was healthy for the opener and ready to contribute for Buckeyes. (Joseph Maiorana/Imagn)

The speculation, debate and conversations about Ohio State never end, and Lettermen Row is always ready to dive into the discussions. All week long, senior writer Austin Ward will field topics about the Buckeyes submitted by readers and break down anything that’s on the minds of the Best Damn Fans in the Land. Have a question that needs to be tackled, like the one today about the Ohio State and the role for Master Teague moving forward? Send it in right here — and check back daily for the answers.

More carries for Teague? He looks to have some strength and explosiveness

Ohio State has no reason to worry about J.K. Dobbins.

And if the Buckeyes previously had any concerns about the depth behind him in the backfield, it looks like they can rest easier now that Master Teague is healthy after dealing with a training-camp injury.

So, even if the season-opening win for the program left a little to be desired with the rushing attack, it’s clearly in good hands once Ohio State gets back into matchups where it’s actually opening up the entire playbook. Both Dobbins and the offensive line took a little heat after the attack cooled off following the explosive first quarter. But by then Florida Atlantic appeared to know that Justin Fields would no longer be running and sold out to make sure Dobbins didn’t beat them, and the Buckeyes weren’t going to push the envelope with the outcome never in doubt.

Dobbins still accounted for more than 100 total yards and a touchdown in the opener, and that vicious stiff arm is another example of the tougher mindset he’s bringing with him into the season. Even for a junior with as much experience as he has, it was always possible that there would be a little rust in Week One — which a couple hesitant runs and the fumble can probably be attributed to on Saturday.

“I thought he ran it good,” Ohio State coach Ryan Day said. “The ball on the ground is unacceptable. We can’t have that. I thought he ran hard, though — at times, harder than I’ve seen him run in the past. We’ll look at the film and figure out where we can get those things in the second level a little bit faster for him. 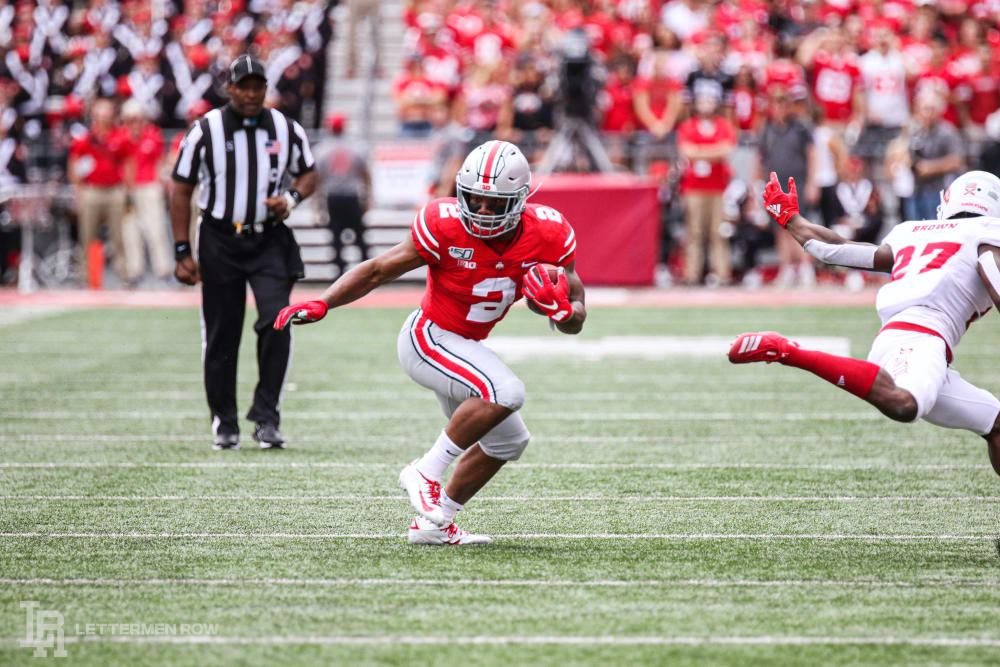 Ohio State running back J.K. Dobbins will have better overall performances this season than his first one. (Birm/Lettermen Row)

“There were a couple things in the zone game where we didn’t fit it quite right up front. A couple guys coming free on that. We’ve got to get that fixed. But overall I thought he played hard and I thought he ran with his pads down, and that’s the first of things to come moving forward.”

The Buckeyes had another guy running with aggression, taking on defenders and building a case for a heavier workload. And Teague clearly made the most of his offseason workouts with Ohio State, looking like a completely different tailback from his freshman year when he had the chance to relieve Dobbins against the Owls.

Teague finished with 49 yards on eight carries, and the timing of some of those touches suggests Ohio State is comfortable using him in key situations and that he could emerge as the true No. 2 tailback option this season. Demario McCall had a handful of bright spots as well, but he came into the weekend as a game-time decision and appeared to get shaken up again at one point in the opener. Given that McCall is perhaps more of a situational weapon and has a history of injuries, Ohio State will surely feel much better about the backfield depth after seeing what Teague could offer as a rusher and potentially a solid presence capable of picking up blitzes in pass protection.

The Buckeyes may not envision using their second tailback for much more than around 10 touches as they feature Dobbins more this season, but Teague made the most of his chances in Week One and can carve out an important spot in the rotation. There is still room for him to grow, but that also applies to the rushing attack as a whole — Dobbins will certainly have better performances, and a truly unleashed version of Fields could help both of them thrive over the course of the season.

For an opener, though, there’s really nothing about that backfield performance for Ohio State that should be a cause for concern. And the truth is there were plenty of signs that the ground game could become something special with Justin Fields, J.K. Dobbins and perhaps Master Teague now edging into the mix.