Connect with us
Loading the player...
Ohio State running back Master Teague is healthy now for the Buckeyes. (Courtesy/Ohio State Dept. of Athletics)

COLUMBUS — Master Teague couldn’t have possibly imagined the silver lining that was coming when he limped off the Ohio State practice field in March.

Pushing to establish himself as the starting running back for a program with one of the richest traditions in the country at that position, Teague didn’t even make it through the first day of spring camp. And after tearing his Achilles, the redshirt sophomore was facing the possibility of falling behind both physically and competitively for the Buckeyes.

But the rest of the roster only made it two more practices before the global pandemic shut everybody down. And then the postponement of the season in August bought extra time before full-contact training camp started, along with nearly two months of bonus preparation time ahead of the season opener once it was pushed back to Oct. 24. So, even while Teague believes he would have been ready even if the Buckeyes had kicked off as scheduled last month, it’s clear that he wound up with a couple good breaks in the aftermath of what looked like a devastating one for his season back in the spring. 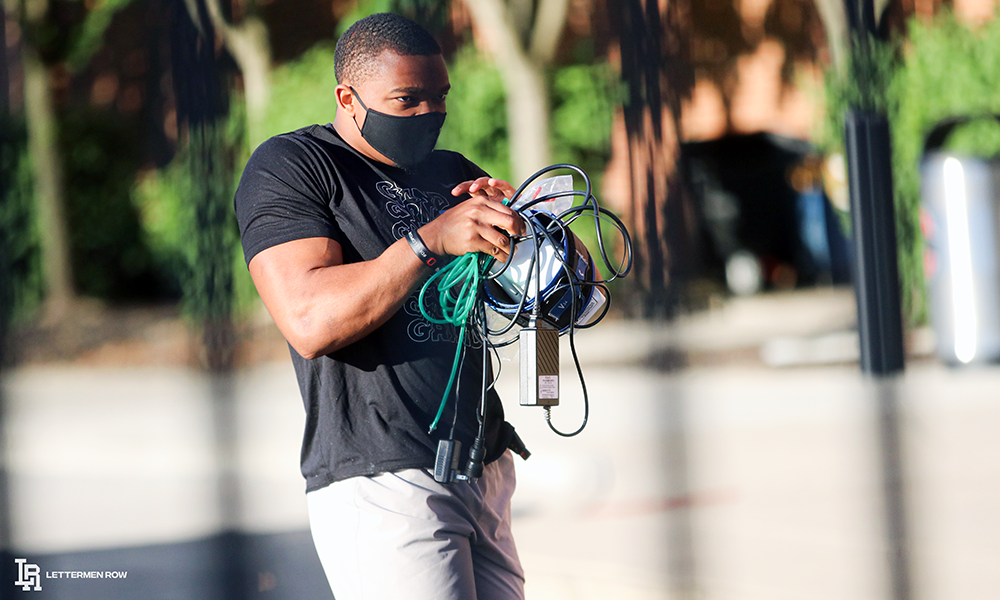 Ohio State running back Master Teague had to be fully committed to his recovery plan. (Birm/Lettermen Row)

“Right now, there’s nothing [limiting] with the Achilles, just getting used to playing ball again and the physical aspect again. I’ve been feeling good, no worries.”

The Buckeyes certainly had a few of those during that week in March after Teague went down, and the plans for replacing the record-setting production of J.K. Dobbins at tailback looked murky at best.

Trey Sermon wasn’t even in the transfer portal yet. Marcus Crowley was still recovering from a knee injury suffered late last season. Demario McCall was working out with the wide receivers and hadn’t really looked like a realistic option in the backfield anyway. True freshman Miyan Williams wasn’t yet on campus, and that left Steele Chambers as the only scholarship rusher available for the 12 practices still left before COVID-19 wiped out the rest of camp.

Teague still had to go through a grueling rehabilitation and training regimen, of course. And that certainly wasn’t ideal in the midst of the pandemic, which is one reason why he elected to stay in Columbus to try to have access to the training staff and medical personnel whenever possible. But in terms of missing on-field reps or giving up ground in a competition for the top spot on the depth chart, Teague essentially was able to stay right on schedule — while also using that setback as an opportunity to get better.

“It was definitely another chance for me to grow as a person, as a man, as a player to continue to build discipline in my life to build for things down the road. … Ultimately I just feel better in my body and with my body control and mechanics of it. I think it had something with me just being able to restart and rebuild from the injury.”

The Buckeyes still have time to keep developing that unit as a whole before the season finally starts. But having Master Teague inserted right back into those plans will go down as just one more thing that would have been hard to predict in March.

Ohio State running backs coach Tony Alford and tailbacks Master Teague and Trey Sermon spoke with the media before practice on Tuesday. Those full comments are available below, and all press conferences with the Buckeyes can be streamed live here and on the Lettermen Row YouTube channel.