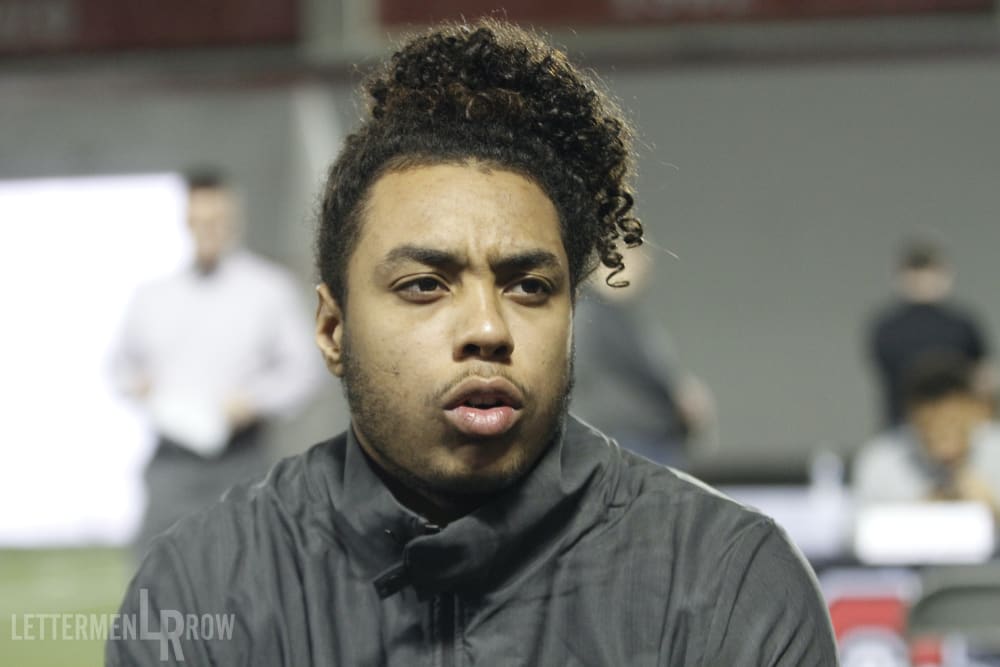 Marcus Crowley braved the weather to talk to the media for the first time as an Ohio State running back. (Birm/Lettermen Row)

COLUMBUS – In the world of college football recruiting, a lot can change in the course of 48 hours. But in October, a wild two-day stretch ended up setting the stage for Ohio State and Marcus Crowley to come together, which is already qualifying as a happy ending.

When running back Sampson James decommitted from Ohio State in October just hours after leaving campus, there was suddenly a hole in the Buckeyes 2019 recruiting class. The Buckeyes wasted no time trying to fill it, reaching out almost immediately to an underrecruited, 6-foot-1, 210-pound tailback committed to the University of Miami named Marcus Crowley. Days later, the Buckeyes offered Crowley — and less than a week after that, he had set an official visit to Columbus.

Fortunately for running backs coach Tony Alford and Ohio State, Crowley is very comfortable running through holes. He ran through them week in and week out at Trinity Christian Academy on his way to being named the Gatorade Player of the Year in Florida. And less than a month after being contacted and offered by the Buckeyes, Crowley was rushing to fill the void at Ohio State and the rising prospect committed.

Underrated? Maybe he was, but that doesn’t mean anything to Crowley now.

“I’m perfectly fine. I’m glad I got the chance to play here,” Crowley said on National Signing Day. “I’m glad Coach Tony reached out to me, I wouldn’t want to be [any] other place and I’m not mad that I was, I guess, under the radar.

“I still did what I did. I had to grind and I’m just happy.”

He’s also already getting to work on campus with the Buckeyes, giving him a head start as an early enrollee ahead of spring practice.

There’ve been a few major adjustments he’s had to make from high school to college. Some will take more time to get used to than others.

“The biggest adjustment probably would be the workouts, because it’s a whole other level up from high school,” Crowley said. “They had that cold streak come through, a polar vortex? I didn’t even go outside. I just stayed in. But I’m starting to get used to it. This week it’s been in the 50s, so I just walk around in shorts and a t-shirt, I’m starting to get used to it.” 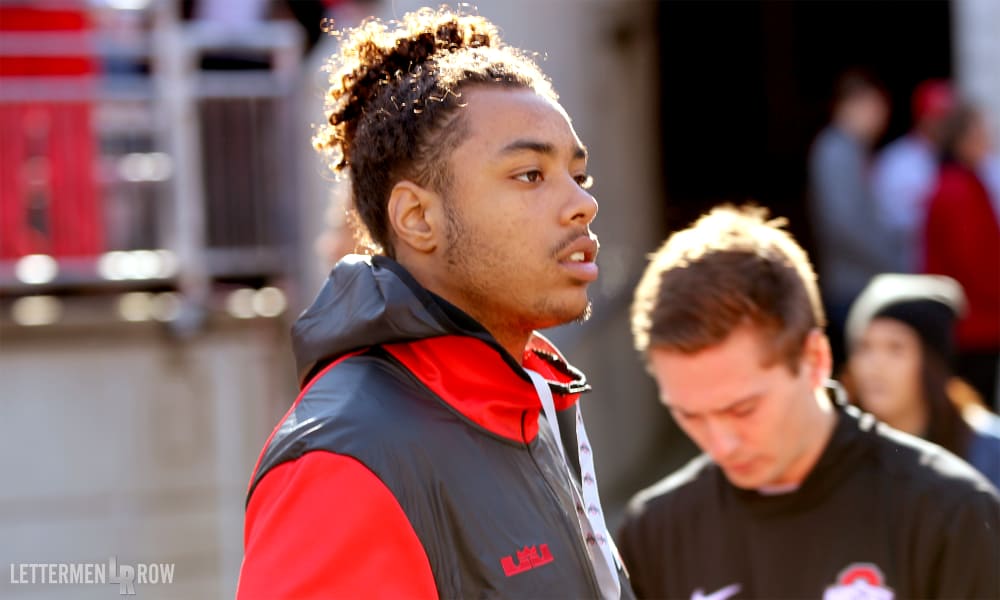 Marcus Crowley took an early November official visit to Ohio State and committed as soon as he returned home to Florida. (Birm/Lettermen Row)

As a Trinity Christian alum, Crowley is getting some help acclimating to the climate of Ohio State — inside the football program and meteorological one.

“My roommates are Sevyn [Banks] and Tyreke [Johnson], they’re from Florida, but really they took me under their wings, Shaun Wade too,” Crowley said. “I mean [Wade and Johnson] definitely played a factor in me coming up here [as high school teammates], but they gave me the choice. I’m my own man, so they gave me the choice, ‘Make your own decision, but I’m going to tell you how it is.’

Real fun at Ohio State is found when a player is on the field and making an impact on the football team. Crowley will have that chance thanks in part to the departure of another Florida running back, Brian Snead.

As an early enrollee, Crowley will find himself fighting for the backup running back role for the Buckeyes with redshirt freshman Master Teague.

“They’re all great backs, and I’m just trying to put the work in and wait my time. [I will] just work hard. That’s all you can do. Focus, pay attention and work hard all the time.”

As a runner, one of Crowley’s greatest strengths is his patience. He may need some of that to succeed in Columbus and he knows it.

“First off, everything goes to God. Without God, I wouldn’t even be here, so shoutout to God, shoutout to my family. but I’m just working as hard as I can and waiting my time to see where things are going to take me,” he said. “I’ll see what’s gonna happen in the future for me. I’ve got trust. I trust in Coach Tony, I trust in all my teammates. All I can do is wait my time.”

Life changes fast in college football. It doesn’t always take 4.4 speed to keep up with it, but it sure helps.

Ohio State: How concerned should Buckeyes be about the offensive line?
Ohio State: Five reasons Johnnie Dixon is an NFL Draft sleeper