COLUMBUS — Marcus Crowley might have flown somewhat under the radar on the recruiting trail, but Ohio State had no trouble locking on to his skills.

If he was underrated as a prospect, all that really did was work in favor of the Buckeyes and perhaps narrow some of the competition. After all, if a program with one of the richest traditions at the position in the country wants to sign him, Ohio State clearly saw the potential for him to become a star.

The ins and outs of his recruitment really don’t matter now anyway, of course. Crowley enrolled early, he’s locked in with the Buckeyes and he’s already complete his first spring camp. All that really counts now is what one team thinks about him and the way he works, and so far Ohio State’s assessment appears to have been spot-on correct as Crowley quickly battles through the customary growing pains as a freshman with an eye on competing for a backup role in the fall.

“He’s swimming,” Ohio State running backs coach Tony Alford said. “He’s swimming — as he should be. But the good thing is that we have thrown him into the fire, and he’s responding. He’s going to make mistakes. And these are very prideful guys, so when they make mistakes, it bothers them. But that’s what he needs. He needs to get thrown right in that fire. 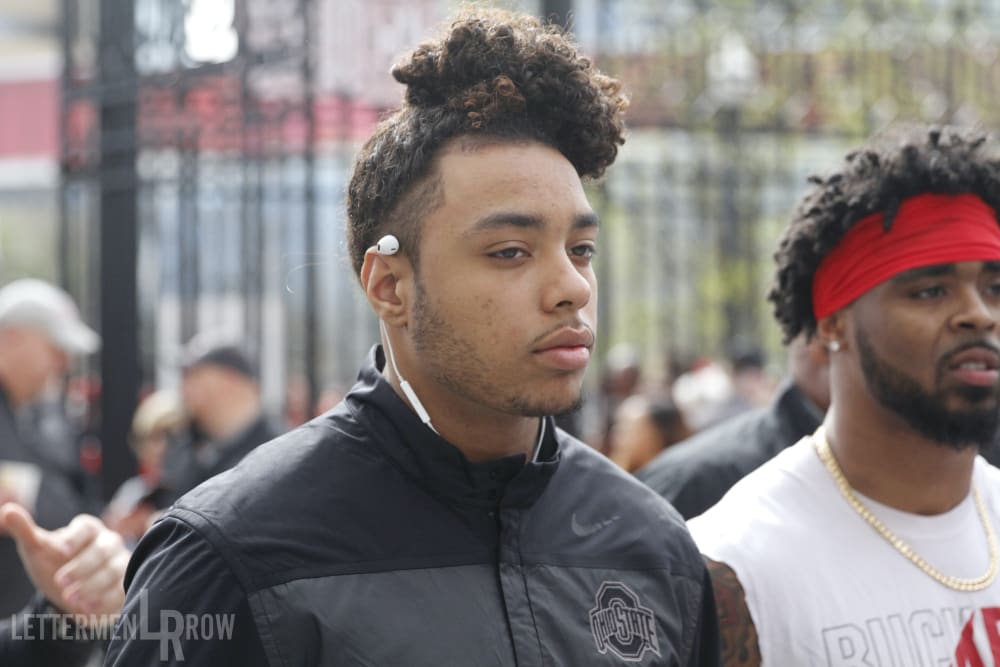 Ohio State running back Marcus Crowley had a productive first spring with the Buckeyes. (Birm/Lettermen Row)

“But he’s got some skills, and all of a sudden, he’ll flash and do something and it’s like: ‘OK, here he goes.’ He’s a tough kid.”

Crowley didn’t have a chance to really show that part of his skillset off in the spring game since Ohio State didn’t have a full-contact scrimmage. But the newcomer still had a handful of opportunities to show off his speed, vision and even briefly his willingness to throw a stiff-arm at defenders in his first outing in the Horseshoe.

What did that 11-touch, 53-yard performance mean for Marcus Crowley? How soon will he be ready for the rigors of the Big Ten? Can he become the top backup behind J.K. Dobbins? Former Ohio State star tailback Beanie Wells was back in the Lettermen Row film lab breaking down the spring game for Crowley and projecting what’s to come with one of the next guys in line to uphold the tradition in the Buckeyes backfield.