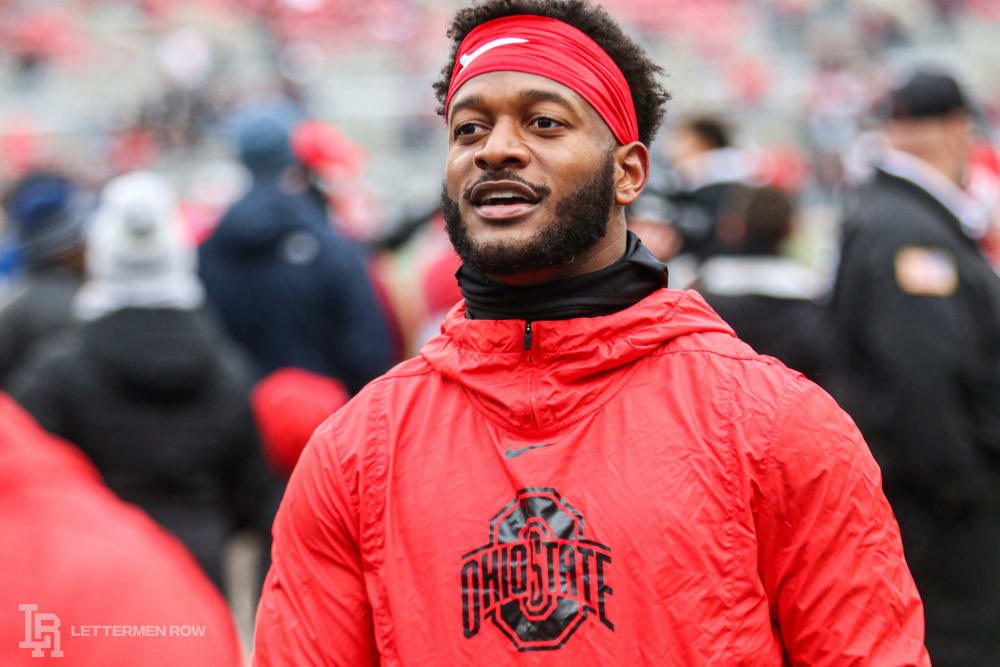 Ohio State wide receiver K.J. Hill is closing out his career on a high note for the Buckeyes. (Birm/Lettermen Row)

COLUMBUS — Some players breeze through their college football career having barely left a trace. Not K.J. Hill.

He is as soft-spoken as they come, but the Ohio State fifth-year senior receiver from Little Rock, Ark., has left a statistical trail that screams production and consistency. He already has nailed down one of the school’s major receiving records with 195 career receptions, topping the 191 of David Boston. And he is one catch away from another – Gary Williams’ 48-game catch streak – headed toward a Dec. 28 College Football Playoff semifinal against Clemson.

“I’m just blessed,” Hill said. “I want to thank God for it, thank my teammates for making it possible also.”

Plus, the plaudits have come while helping his team to an unbeaten record, a third straight Big Ten championship and a berth in the final four.

He should be, second-year receivers coach Brian Hartline said this week. Hill’s production and leadership speaks to his impact.

“I think it’s really unselfish,” Hartline said of a facet of Hill’s legacy. “He’s a guy who could have left early [after last season]. He came back. He was a staple. If you pulled K.J. Hill out of our [wide receivers] room, we are not as talented in that room. 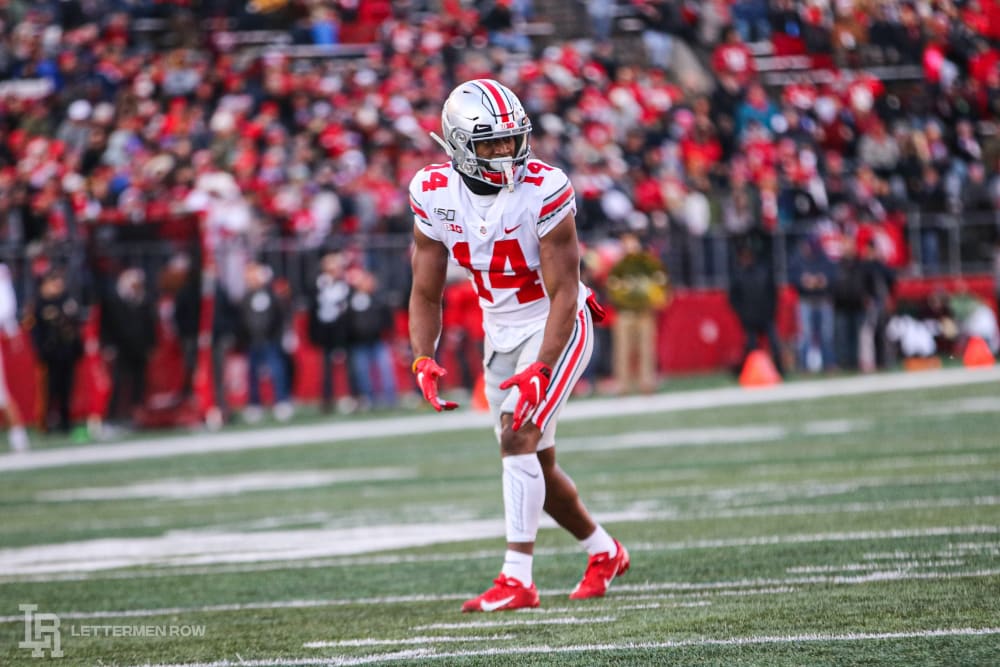 Indeed, under Day, first as the new Ohio State quarterbacks coach and offensive co-coordinator over the previous two seasons and now as head coach but still playcaller, Hill’s production blossomed along with a more prolific passing game with three different quarterbacks: J.T. Barrett, Dwayne Haskins Jr. and then Justin Fields this season. So when Day was asked about the receiver’s development through a five-year stay, the coach has never known an unproductive or reluctant Hill.

“I wasn’t here when he first got here, but K.J. has just had production throughout his career, since I’ve been here,” Day said. “He’s been clutch — very, very productive.”

Redshirting in 2015, then playing behind hybrid back Curtis Samuel in 2016, Hill’s career stats read like this:

It is an example, Day said, of a player making the most of collegiate opportunities by staying the course and staying in school.

“If you look at the guys – and he’s not the only one — who have been in our program four or five years, you see a high level of development,” Day said. “There’s a lot of reasons for it, but one is because you’re going against great players every day.”

For Hill, that has been against what is a talented group in the Ohio State defensive secondary. And the improvement has come as much in the details as the catches, Hill said, which often leads to working himself wide open in clutch moments.

“I know individually, the stuff that people don’t see, I feel like I got better at as a player,” Hill said. “That was a good thing for the outcome of my last year here.”

As for those catches, well, he’s a receiver, and his streak of at least one grab per game dating back to the win over Northwestern the sixth game of 2016 is a product of doing his job. 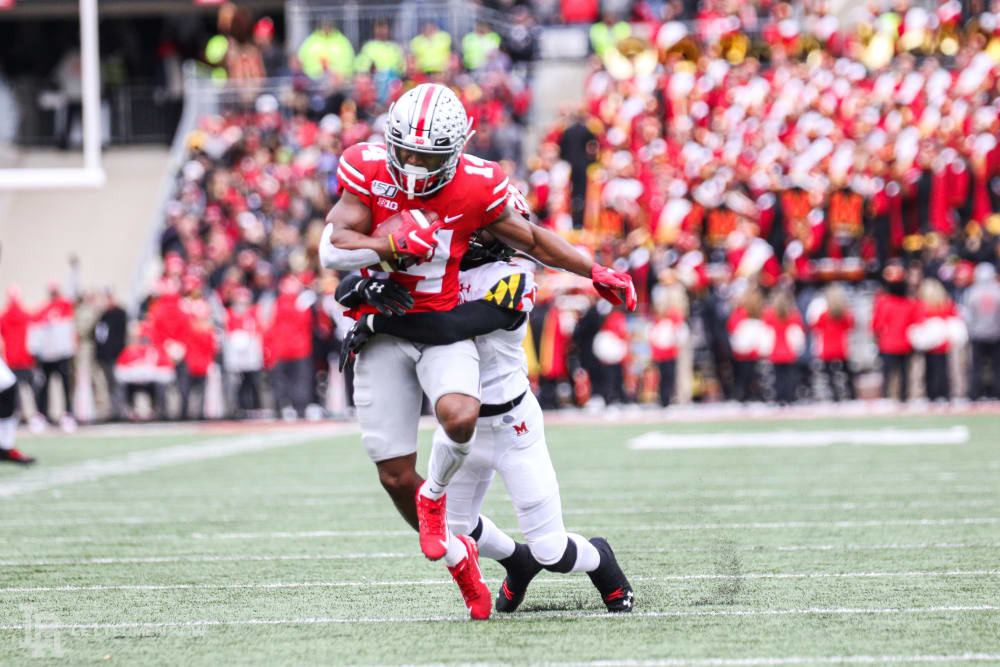 “I just feel like I did what I’m supposed to do: That’s catch the ball,” Hill said. “The ball comes my way, I’ve got to catch it. And I did a good job with that, not even knowing I caught a pass in every game since 2016.

“I’m just doing everything trying to help the team in any way. And my job is to catch the ball and make big plays. I just try to do that.”

His other responsibility, Hartline said, was being a leader in the wide receivers room, following in the deep footprints fifth-year seniors Terry McLaurin, Parris Campbell and Johnnie Dixon put down the year before.

“I think his biggest legacy, hopefully, will be how these young guys turn out,” Hartline said. “The guys you leave behind, how you leave the room, is your true legacy. The impact that Terry McLaurin, Parris Campbell, Johnnie Dixon had [through last season] is being shown right now.

“How these young guys now progress, both as individuals and as role players, that’s K.J.’s legacy, that’s Austin Mack’s legacy, that’s Ben Victor’s legacy, that’s C.J. Saunders’ legacy. Four guys are leaving, four guys need to step up, and it will be very interesting to see these guys progress come next year with these four gone.”

“That’s my big brother,” Wilson said. “That’s the guy who’s always looking out for me, giving me pointers here and there, keeping my head up when I make a mistake.

“So I love him, and he’s deserving of everything he’s getting right now. I just can’t wait to see what the future has for him.”

But first, K.J. Hill has another record to chase and maybe two more wins with the Buckeyes.