K.J. Hill could set Ohio State records at the end of his college career. (Birm/Lettermen Row)

COLUMBUS — There have been flashier wide receivers than K.J. Hill at Ohio State.

Better deep threats. Bigger bodies. Targets with a knack for filling the highlight reel. Even during his decorated career with the Buckeyes, Hill has rarely ever been the wideout who draws the brightest spotlight.

But heading into his final home game, Hill remains on pace to leave as the most productive pass-catching weapon in school history. And when it comes to reliability, the Buckeyes have never seen anybody quite like the fifth-year senior from Arkansas.

“I mean, our team knows in this room right here, the spotlight is on him because he’s a team captain and one of the more decorated receivers in the history of the school,” Ohio State coach Ryan Day said. “His production speaks for itself. 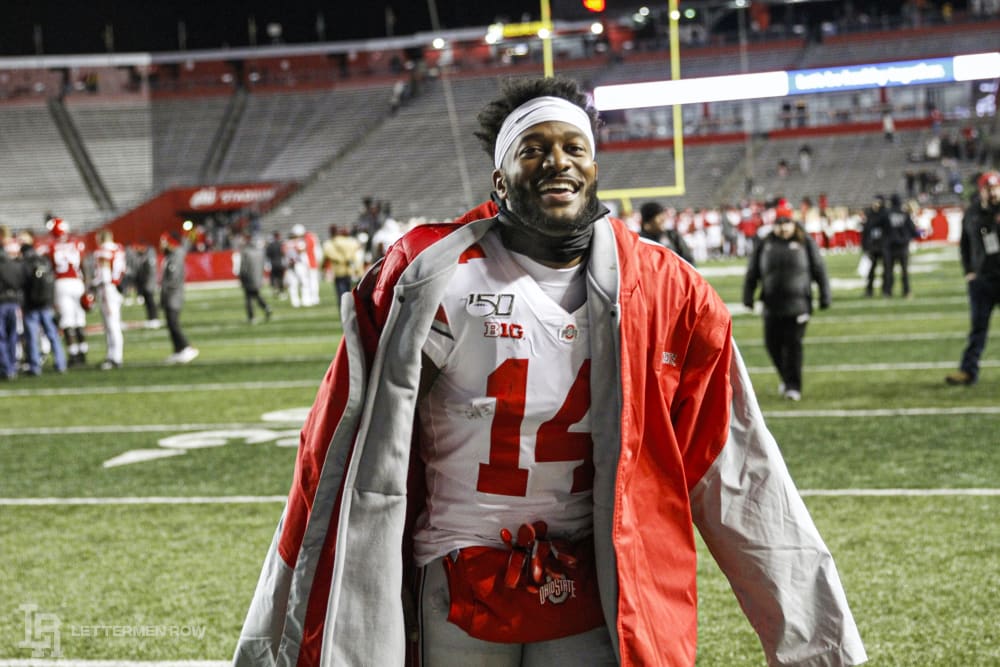 Ohio State wide receiver K.J. Hill is on track to leave as the most productive target in school history. (Birm/Lettermen Row)

“K.J. has just got a tremendous way of just playing the game. He’s got great body language for the quarterback. Like certain receivers just know how to get open, and they know how to talk to the quarterback with their body language. He understands space, he knows how to get open, he’s crafty, he’s been around, he’s clutch. When you just think about all the plays he’s made in his career it’s pretty amazing. The production that he’s had is off the charts.”

Hill is on the cusp of setting the new standard for the Buckeyes, needing just 10 catches to become the school’s all-time leader in that category. Depending on if Ohio State wins in his Horseshoe sendoff to clinch a spot in the Big Ten Championship and then what might happen in the postseason, Hill also has a shot at breaking the school record for consecutive games with a catch — a streak that currently sits at 44.

If he wanted, Hill could have easily skipped his shot at breaking those marks and headed to the NFL a year ago. But chasing a national title and leading the way as a captain brought him back to the Buckeyes for one more run, and he hasn’t slowed down at all.

“Some guys are just competitively tough, they understand how space works and how to get open and how to find the open window, how to win against man-to-man and all those things,” Day said. “That’s K.J. He’s left a lot of that in that room, and there’s a lot of those younger guys that have learned from him this year.”

Hill isn’t done yet. And his legacy still has room to grow.

What has made K.J. Hill one of the most productive wide receivers in Ohio State history? How does his game allow him to thrive in the passing attack for the Buckeyes? Where can he have an impact in the huge showdown on Saturday against Penn State? Former Ohio State wide receiver and national champion Evan Spencer puts the film on from Hill’s most recent outing and tries to answer those questions in the latest episode of BuckIQ.