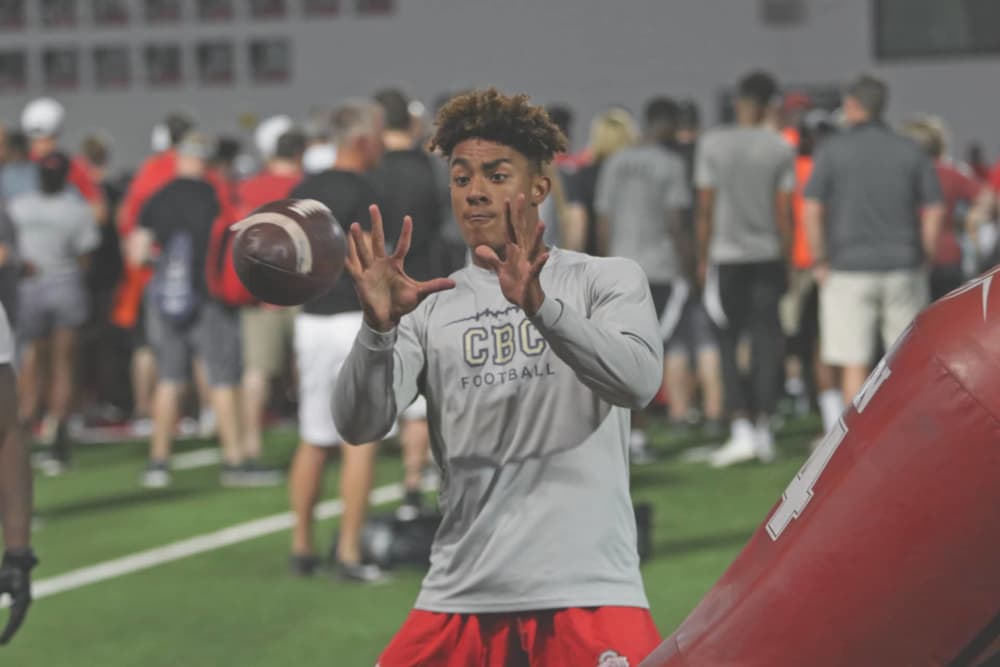 Another knee injury will keep Kamryn Babb on the sideline this year at Ohio State. (Birm/Lettermen Row)

CHICAGO — The return of Kamryn Babb to the field is on hold, and the debut of the four-star wide receiver at Ohio State will have to wait.

Coming off a knee injury that cost him his senior season at Christian Brothers College (St. Louis), Babb suffered a new one with the Buckeyes during offseason workouts in June that will likely keep him on the sideline for all of the 2018 campaign as well. Urban Meyer confirmed the injury to Lettermen Row on Tuesday at Big Ten Media Day, and Babb will now face another lengthy rehabilitation period instead of trying to crack the program’s deep rotation at wide receiver.

This latest ACL tear is in the opposite knee from the one that forced him out of action last season, continuing a string of bad injury luck for Babb after also breaking his leg as a sophomore in high school.

Babb wasn’t likely going to be counted on for much playing time initially in his career thanks to the return of all the veterans in the loaded Zone 6 position room this season. But his athleticism, strong hands and mental approach had all made him one of the most coveted recruits in the country last year before his injury. That setback ultimately did nothing to deter Ohio State from adding him to its most recent signing class.

Along with Blue Smith and Babb’s high-school teammate Cameron Brown, the three young targets were considered a strong haul on the recruiting trail and will represent the next wave for the Buckeyes once the upperclassmen graduate — with the possibility of more playing time opening up with a couple draft-eligible players facing a decision about their NFL futures.

Even if Babb didn’t break into that crowded depth chart this season, Ohio State would have surely given him an opportunity to get back in pads and get some reps as part of his return from last year’s injury. A new NCAA rule allows for participation in up to four games without losing redshirt eligibility, but Babb appears like he won’t be able to take advantage of it now.

Urban Meyer did the right thing for Ohio State: ‘It’s bigger than all of us’
Video: Urban Meyer interview session at Big Ten Media day
Advertisement