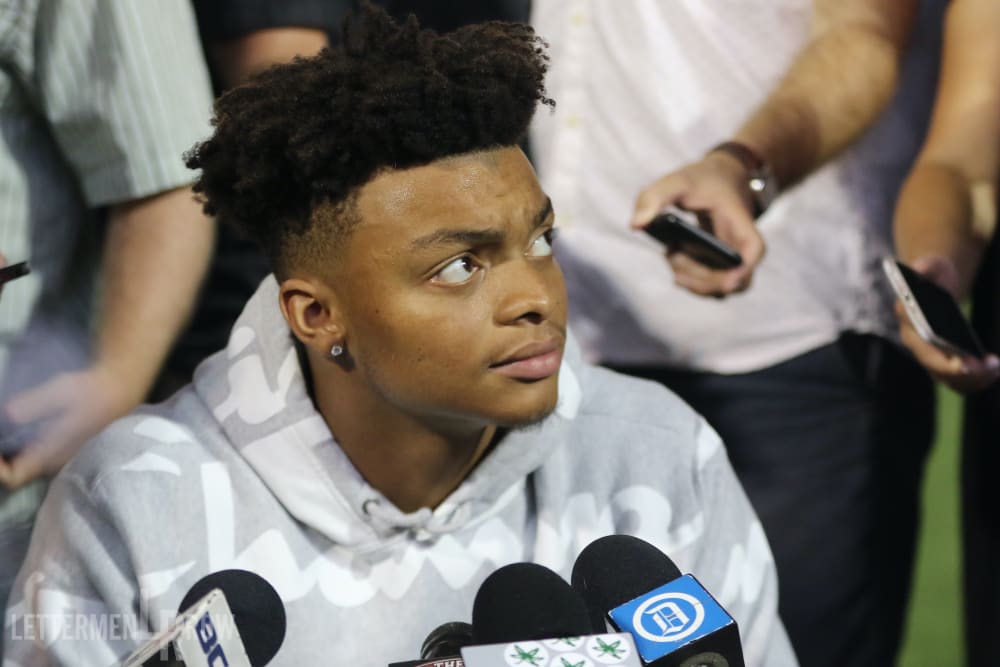 Ohio State quarterback Justin Fields talked with the media after being named a starter for the Buckeyes. (Birm/Lettermen Row)

Does that mean the journey for the Buckeyes to get there was pointless if the destination seemed so obvious or predetermined? Certainly not, and Ryan Day has never wavered in his approach that Fields had to prove himself worthy in a legitimate competition before he could earn that coveted, marquee spot.

Now Fields has done what he needed to do, Ohio State has a new leader and the preparations for the season opener on Aug. 31 against Florida Atlantic can begin in earnest. Maybe there’s a belief outside of the Woody Hayes Athletic Center that the Buckeyes were already doing that with Fields, and in some respects that might be true since he’s been taking reps with the first-team offense all along.

But Day still had to sign off and get behind his guy, and Monday morning he did just that.

“I think any time you’re naming a starter, they have to earn it,” Day said. “How do you earn it? You earn it by playing. It’s very hard to earn a job in 15 practices in the spring. Walking into preseason camp, you don’t just give somebody a job. Never believed in that, never will. You have to earn it.

“It’s hard at quarterback. You need reps to really show what you can do. Coming out of the spring, Justin at this point had a good feel for the offense but certainly was nowhere near ready to be the starter for this offense. After the first week, he really wasn’t there. Made some mistakes, turned the ball over. Right now he’s starting to scratch the surface. I still don’t think he’s where he needs to be. After this week, I think he played at a starter level, earned the job. We’ll see where it goes from there.”

So, what exactly does come next for the Buckeyes? How does this move really impact the program heading into the season, and what does it mean for the rest of the quarterbacks? Lettermen Row takes a look at the lessons about the critical position now that Justin Fields has been given the keys.

The competition isn’t over at quarterback, even though Fields now has his spot secure on top of the depth chart. When Ryan Day met with the passers to talk about the decision on Monday, he again reflected on the magical 2014 run to the national championship for the Buckeyes — and how it took three quarterbacks to get the job done.

If that were to happen at Ohio State this year, that means both Gunnar Hoak and Chris Chugunov would need to be ready to step in and deliver. And right now, it’s still unclear which of them would be the first guy off the bench behind Fields.

“I think Gunnar and Chris both bring good skill packages to the table,” Day said. “They both are accurate throwing the ball, got a good feel for anticipation and touch. A little bit more athletic than you think they are.

“We’ll let these guys keep learning the offense. With Gunnar, we’ve practiced 14 or 15 [times], only been in the offense really 15 practices. So, really he’s at where Justin was coming out of the spring. So he’ll keep growing day in and day out. They’ll keep working. As we get closer to the game, we’ll decide if Justin were to come out of the game, who would go in next.”

The expectation all along was that the highest-rated recruit in school history would be the starter for the Buckeyes — at least for everybody other than Justin Fields.

It’s true that the Georgia transfer has plenty of confidence in himself, chose Ohio State in part because of the opportunity to play right away and has carried himself like a starter since spring camp. But Fields believes in a Humble over Hype mantra, and even after getting the nod on Monday, his mentality hasn’t changed.

“When did I truly feel I was a starter? You really can’t look at yourself as a starter,” Fields said. “You kind of have to look at it like you’re not the starter so you keep working.

” … I kind of tell myself that I’m not there yet, I’m not where I need to be so I can just continue to keep working and keep getting better every day.”

How will Ohio State handle Justin Fields as runner?

Ohio State has managed a difficult situation with its roster turnover at quarterback about as well as could possibly be expected. But the depth still isn’t ideal, particularly with Gunnar Hoak still trying to get up to speed with the playbook for the Buckeyes in time for the opener next week.

So, what does that mean when one of the strongest attributes Fields brings to the table is his mobility? Ohio State obviously wants to feature his legs as part of the offense, and even if it doesn’t call designed runs for him, his elusiveness and ability to extend plays still could expose him outside of the pocket. The Buckeyes are certainly going to monitor his usage to make sure it’s not putting him at risk. But what exactly that means for his carries each game remains unclear at this point.

“I’m not comfortable with him taking a lot of hits in the course of a game, for sure,” Day said. “I think that those are all things that are going to be really calculated down to the last carry. Like you said, because he has such a great skill set, you can do a lot of things with him. You have to be smart with that.