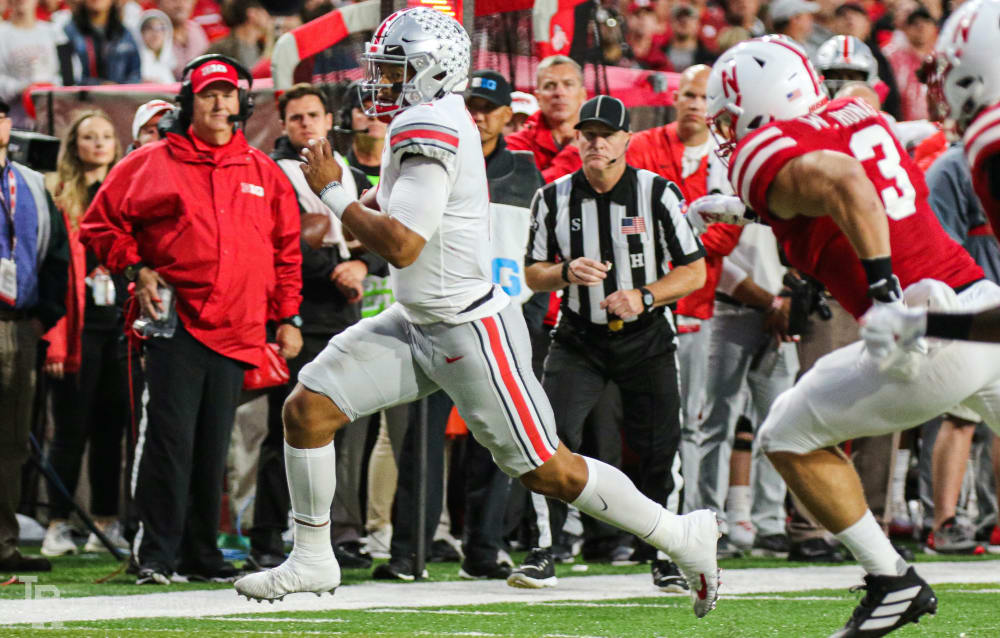 Ohio State quarterback Justin Fields showed how dangerous he can be as a rusher last week. (Birm/Lettermen Row)

The speculation, debate and conversations about Ohio State never end, and Lettermen Row is always ready to dive into the discussions. All week long, senior writer Austin Ward will field topics about the Buckeyes submitted by readers and break down anything that’s on the minds of the Best Damn Fans in the Land. Have a question that needs to be tackled, like the one today about the Ohio State and the ability of Justin Fields to run the ball? Send it in right here — and check back daily for the answers.

Do you suspect Fields will continue running as much as he has against tougher defenses?

Also, are the Buckeyes playing “up tempo?” It feels to me they are playing better but a slower pace then last year.

Justin Fields was never completely chained down by Ohio State in the early going of the season, but it effectively seemed to sneak a little extra weight into his cleats to keep him from running too much in games where it wouldn’t be necessary.

The Buckeyes showed last week, though, that they’re ready to turn him loose as a runner. And his value as a dual-threat weapon with blinding speed will only enhance as the level of competition increases heading into the meat of the Big Ten schedule. As the season progresses, the threat of Fields on the ground is only going to become more important to put stress on the better units the Buckeyes will face — starting this week against Michigan State and the nation’s No. 4 rush defense.

Not every game plan is going to the same, of course. But last week’s win over Nebraska provided one of the most informative looks at the blueprint with Fields as Ohio State starts unveiling the entire offense after what amounted to a four-week preseason.

For the first time since the sophomore quarterback was getting his feet wet in the season opener, Ohio State racked up double-digit rushing attempts with Fields in the blowout over the Huskers. And while there are going to be more fundamentally-sound teams down the stretch than the artists-formerly-known as Blackshirts, it’s becoming clear that teams are terrified and confused as they try to figure out a way to defend Fields and either J.K. Dobbins or Master Teague in the backfield.

(Add on top of that a dangerous collection of wide receivers and the impressive work Fields has done throwing the football, and the challenge only goes up from there.)

Now, Ohio State has seen before the risks that can come from relying on a quarterback too much in the ground game, which can lead to predictability in play-calling and extra exposure to injury for the most important player on the field. Obviously scrambling is a part of the arsenal for Fields that the Buckeyes can’t entirely plan for and certainly don’t want to limit since it has already produced a couple touchdowns this season. So, that means last week’s outing is probably the sweet spot for Fields, particularly since his 12 carries represented just a fraction of the attempts with Dobbins and Teague combining for 36 at tailback.

The Buckeyes can’t dial that back in big games, because that’s where their biggest edge comes from thanks to the star-studded array of talent on the roster.

The reason that number of rushes could potentially go up against the tougher defenses? Ohio State wants the football in the hands of its best playmakers in those situations. 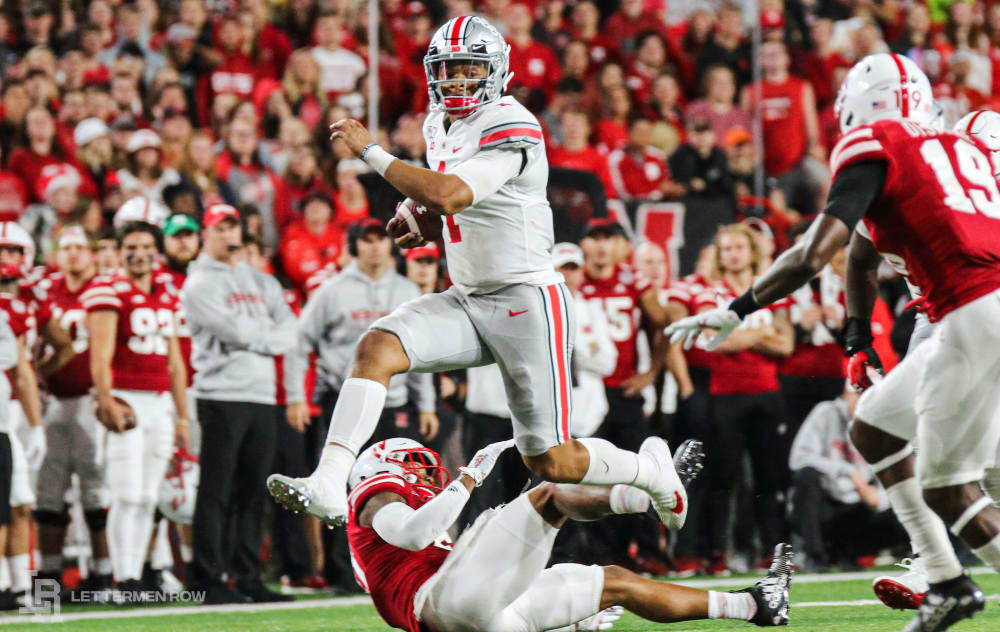 Fields has proven he has toughness, that he can take hits and that he’s willing to put his body on the line on the way into the end zone with a couple hard-nosed scores among his seven rushing touchdowns so far. Against measuring-sticks like Michigan State, Northwestern or Wisconsin this month, the ability of Fields to keep opponents guessing and unable to focus on any one weapon is what helps set the Buckeyes apart.

It definitely helps that Dobbins is one of the most productive running backs in the country. It’s been a huge boost for the Buckeyes that an offensive line that has four new full-time starters has zipped through any growing pains and is playing at an elite level. And it’s clear that Fields doesn’t have to shoulder the success of the offense all by himself the way some previous Ohio State quarterbacks may have had to at times.

The Buckeyes know there’s a balancing act in using Justin Fields as a rusher, and that’s almost certainly why he had such a relatively light load for somebody with his athleticism in September.

But when Ohio State has to win championship-defining matchups as it gets later in the season, his feet are going to be a key part of the equation.