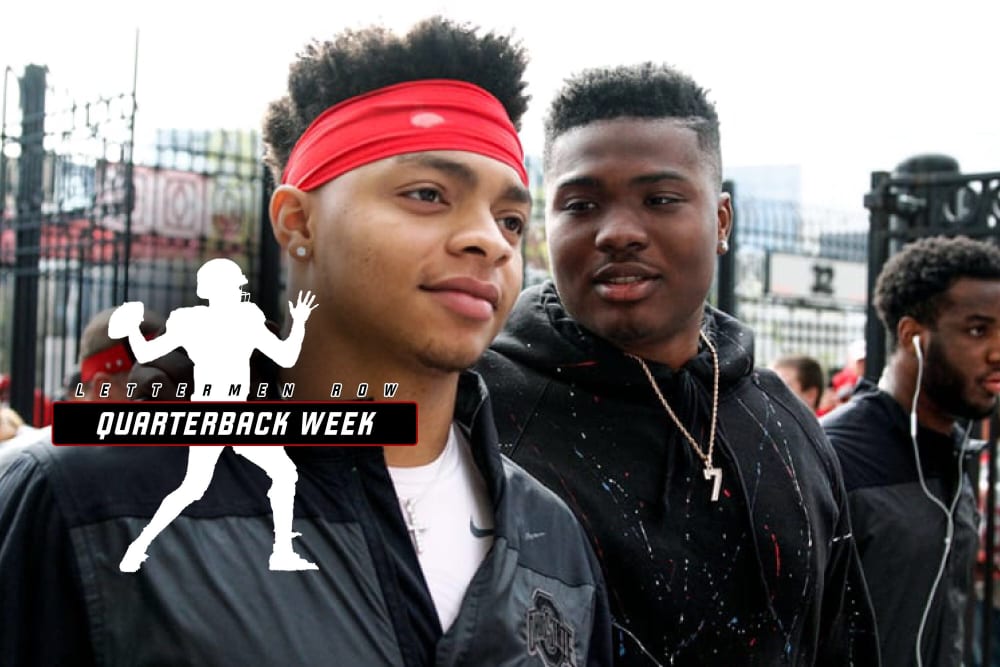 Ohio State quarterback Justin Fields (left) will be trying to replace the record-setting Dwayne Haskins for the Buckeyes. (Birm/Lettermen Row)

The speculation, debate and conversations about Ohio State never end, and Lettermen Row is always ready to dive into the discussions. All week long, senior writer Austin Ward will field topics about the Buckeyes submitted by readers and break down anything that’s on the minds of the Best Damn Fans in the Land. Have a question that needs to be tackled, like the one today about the impact of Justin Fields as part of Quarterbacks Week? Send it in right here — and check back daily for the answers.

The Ohio State offense itself is flexible enough to adapt to any kind of quarterback without necessarily changing the core philosophies Ryan Day believes in and emphasizes. And the fact that he now has somebody who can do some of just about everything at the position could potentially open up even more options for Day and make life even tougher on defenses trying to stop the Buckeyes.

It’s always important to keep in mind that Justin Fields is still an inexperienced player, still has a lot to learn when it comes to the playbook and won’t be anywhere near a finished product when the season begins. But there is a reason he arrived as the highest-rated recruit in school history as well, and those physical tools are obviously what will matter when it comes to shaping the attack around him.

Fields has the athleticism to be a true dual-threat weapon. There are splashes of Braxton Miller electricity, and the Georgia transfer is going to be a threat to pull away from defenders with his speed. With solid size at 6-foot-3 and 223 pounds, he’s also got the frame to get tough yards between the tackles just like J.T. Barrett did on the ground. 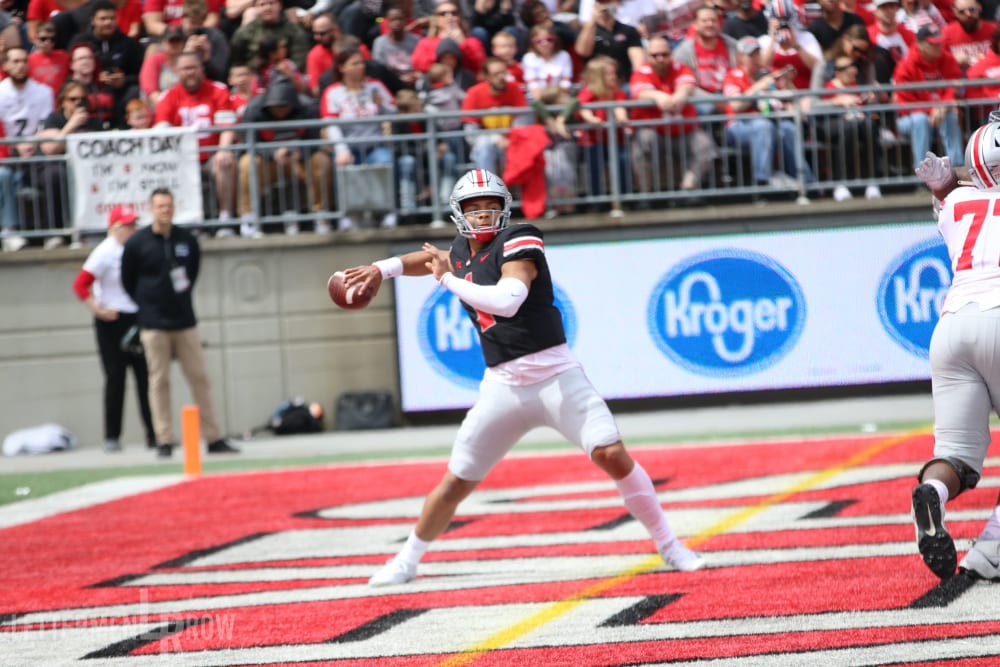 Ohio State quarterback Justin Fields has the ability to throw the deep ball for the Buckeyes. (Birm/Lettermen Row)

The tricky part for Ohio State is that it doesn’t have any intention of going back in time and overload the system with quarterback rushes. That’s where the arm strength of Fields will be important, particularly with the Buckeyes still loaded at the skill positions and looking to continue to aerial evolution that really picked up steam a year ago.

At this point in his development, Fields simply isn’t going to be the same type of passer that Dwayne Haskins was during his record-setting season a year ago. It’s unfair to expect that he’ll be able to deliver the football with the same type of accuracy, velocity and confidence that the Heisman finalist did while becoming a first-round pick. That’s not a knock on Fields at all, just a reminder that the bar in that department is incredibly high even for a player with his arm talent.

That’s also true of comparisons with Miller and Barrett. But it’s the fact that Fields has the potential to do things that all of those successful predecessors did at a high level that makes him such a valuable asset. Thanks to the threat of his legs, Fields should face defenses that have to stay honest, which means the throwing windows might be a bit wider. Because of his ability to sling a deep ball, opposing defensive coordinators probably won’t be in a hurry to load up the box to stop the run — which also should be helpful for tailback J.K. Dobbins.

It still remains to be seen exactly how much Justin Fields will be a running threat for the Buckeyes. It also might take a bit of time for him to blossom as a passer and ensure that Ohio State can have the balance it wants.

But either way, putting Fields into the system isn’t going to require a sweeping adjustment. Ohio State has built an attack that might look a little different depending on who is taking the snaps and what they do best, but the playbook as a whole won’t actually change.