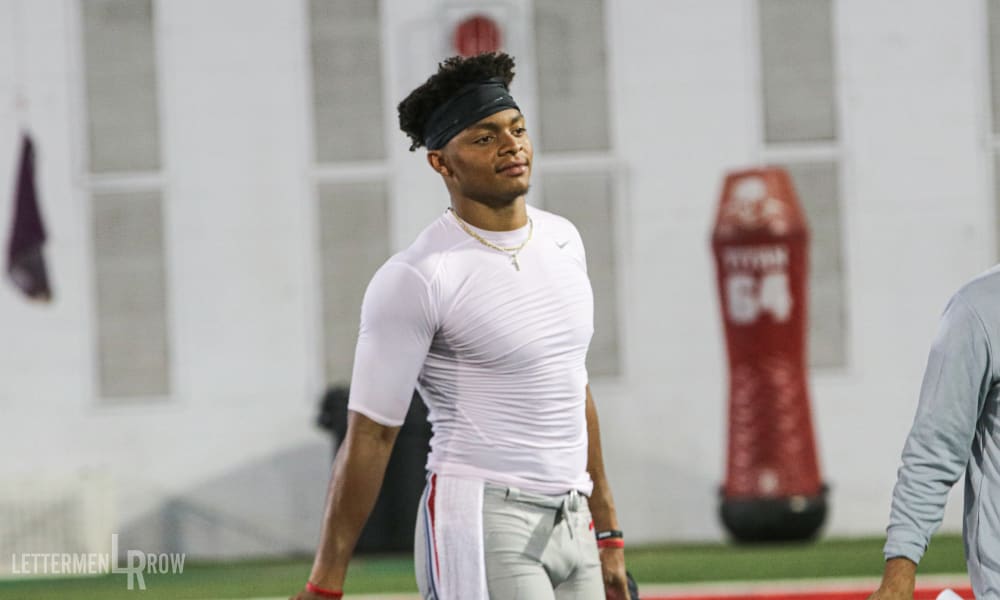 Ohio State quarterback Justin Fields is working to lock up the starting job for the Buckeyes. (Birm/Lettermen Row)

COLUMBUS — The reminders are on both wrists for Ohio State quarterback Justin Fields.

Think he’s not OK with having to earn the starting job in training camp despite arriving as the most decorated recruit in school history? Check out the red rubber bands with black lettering.

The entire college football world understandably expects that Fields will eventually be the leader for the Buckeyes at the most important position on the roster. But Ohio State didn’t just hand the job over to him during spring camp and is still in no hurry to do so after three workouts in August, and he’s fully on board with that approach.

“You just have to embrace it,” Fields said after practice on Sunday morning. “All this hype and all that, you just have to back it up. Don’t let anything get to your head, and I just try to stay even-keeled. Don’t listen to the outside people, keep my head down and work. That’s the way I’ve always been. I’ve never gotten too cocky. I don’t really like people [like that], and I just try not to have a big head and stay as humble as possible. Just keep it moving.

“I mean, Coach [Ryan] Day told me before I came here that it wasn’t going to be given to me. I definitely think we’re all trying to get that starting spot, of course. But we just have to take it day by day and improve every day as a team.”

It’s no secret that having the right quarterback is crucial to that overall success for the Buckeyes, and every indication continues to be that the former five-star recruit and Georgia transfer will be the inevitable pick.

Fields might not be worried about the depth chart at this point, Day might not be in a rush to nail down a depth chart and quarterbacks coach Mike Yurcich is still in the early stages of gathering the kind of data he wants to see before making a decision. Ohio State is also aware, though, that the clock is ticking with the opener at the end of the month, and it can’t just let the competition with Gunnar Hoak play out indefinitely.

But with or without that spot officially confirmed, it’s already becoming clear that Fields is increasingly taking on the leadership responsibilities that come with operating the offense for a national-title contender.

“I mean, everyone on the team knows the quarterback has to be a leader,” Fields said. “So, I’m just kind of taking that step, and right when you come into a new place, you can’t just act like a leader. You have to get used to the guys and just kind of build relationships with them so they trust you, and then you can step out and become a leader. That’s what I did, and I feel like I’m becoming more of a leader every day.

“Like today before team period, we weren’t having the best practice like we did yesterday … we weren’t as good, so I got all the guys together and was like, ‘Yo, we need to pick it up.’ I’m just trying to become that leader of the offense.”

The Buckeyes will lean heavily on a couple upcoming scrimmages to help determine whether Fields has earned that right, since Yurcich joked that the ultimate measuring tool of wins and losses when it counts for real isn’t available yet. 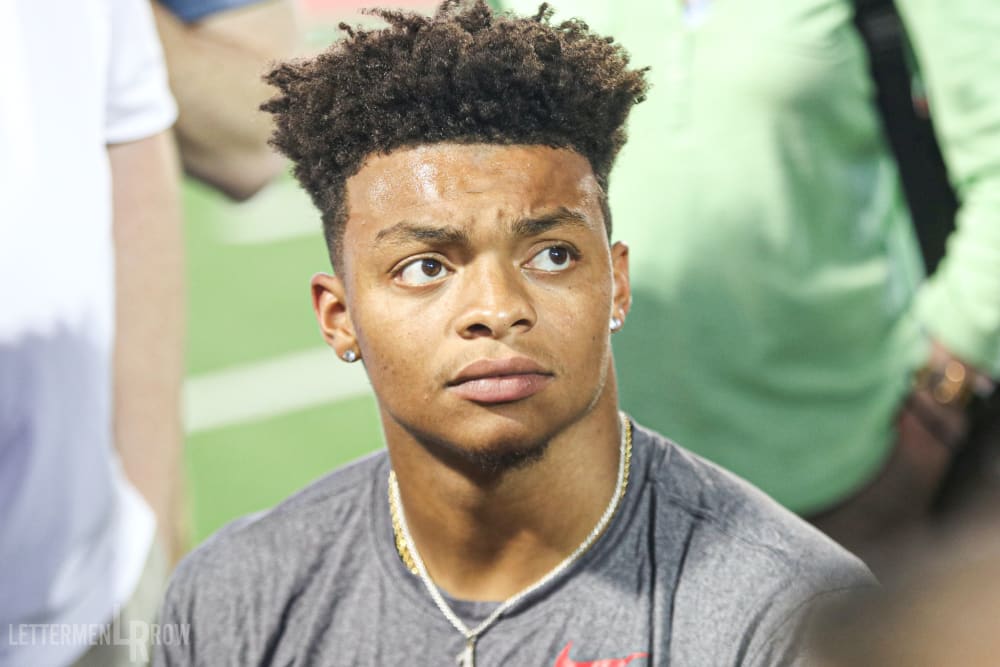 Three days of training camp isn’t enough to provide resolution, obviously, and Ohio State still isn’t in any rush to nail down a definitive timeframe. But even in a small sample size, Fields has been impressive for the Buckeyes coming off a productive summer developing chemistry with the receivers, continuing to absorb the playbook and getting even stronger with his first offseason of conditioning under Mickey Marotti.

“Well, it would be wins [that could determine it], but unfortunately you don’t play anybody in the preseason,” Yurcich said with a smile. “You know, that’s the ultimate stat and the only stat that matters. I think after we get into it for a couple weeks and we’re able to put some live scrimmages together and try to simulate the game as much as possible, we’ll have a better feel for what that timeline is and who that is going to be.

“I think there’s a standard of quarterback play here for a long time that’s been what we need — the Buckeye standard at quarterback. When we see that, we’ll move forward.”

Even after that point, a preference for humility might keep Justin Fields from evaluating himself at that standard.

But it appears he’s well on the way to leading the Buckeyes.