With his dynamic mobility, pinpoint accuracy and an arm that is probably much stronger than he typically gets credit for, the Ohio State sophomore has all the tools to seemingly turn down the degree of difficulty for the toughest position in sports.

Of course, the Buckeyes can also do plenty to make the position easier for Fields.

The Georgia transfer has an abundance of weapons at wide receiver. He’s well-protected by a physical offensive line and blessed with a backfield mate who might be the best tailback in the country. And a big part of the reason he’s even at Ohio State in the first place is the quarterback-friendly reputation and innovative offensive approach of coach Ryan Day, all of which has combined to put Fields in the center of perhaps the most explosive attack in the country.

“I’ve learned a lot just in my [short] time being here,” Fields said before practice on Tuesday. “I think Coach Day has taught me a lot, [quarterbacks coach Mike] Yurcich has taught me a lot in terms of the game of football, where my feet need to be, where my eyes need to be. So, I’m just doing all I can to learn and get better each and every day. 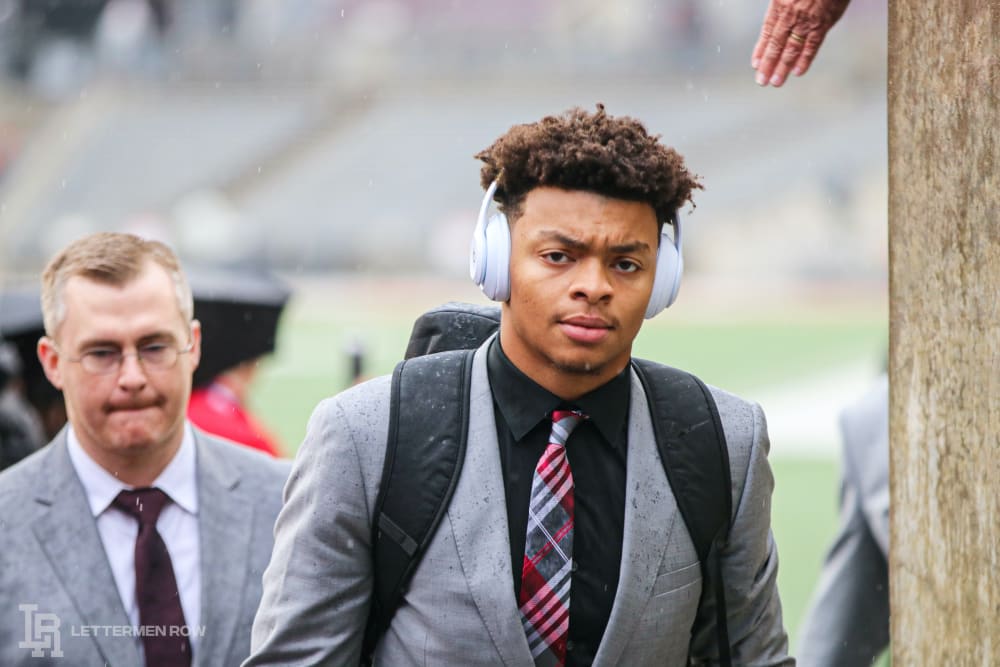 Ohio State quarterback Justin Fields has been an ideal fit for the Buckeyes offense. (Birm/Lettermen Row)

“What makes this offense [quarterback friendly] is the guys we have on the team and the coaches we have behind the scheme. I think we have a lot of weapons on the outside, a great offensive line, great backs and some great offensive-minded coaches. All those guys work hard, and I think we work well together.”

The results have been obvious every week as a first-time starting quarterback has helped power the nation’s third-ranked scoring offense, zipping through the growth curve ahead of schedule and performing as if the playbook was built just for him.

Day, of course, has always maintained that he would tailor his system to fit the strengths of his quarterback. But with a guy who can do just about anything the coaching staff can dream up, Fields has proved to be a perfect fit to guide the unbeaten Buckeyes and put them in position to return to the College Football Playoff.

And it certainly helps that on top of all those other attributes, Fields has proven to be a warrior on the field, too.

“As you start to have more experience with a quarterback, you have to be able to trust him,” Day said. “He’s tough, he’s gritty. … The more I’m around him, the more I really respect how tough he is.”

What makes the Ohio State offense such a perfect fit for Justin Fields? How much more can the Buckeyes continue to add to the scheme with Fields leading the way? Where is coach Ryan Day creating conflict for defenses with his route concepts? Former Ohio State quarterback Justin Zwick was in the Lettermen Row film lab breaking down the attack and trying to answer those questions in the latest episode of BuckIQ.

What We Learned as Ryan Day, Buckeyes dive into second off date
Jeff Okudah still growing as shut-down corner for Buckeyes
Advertisement