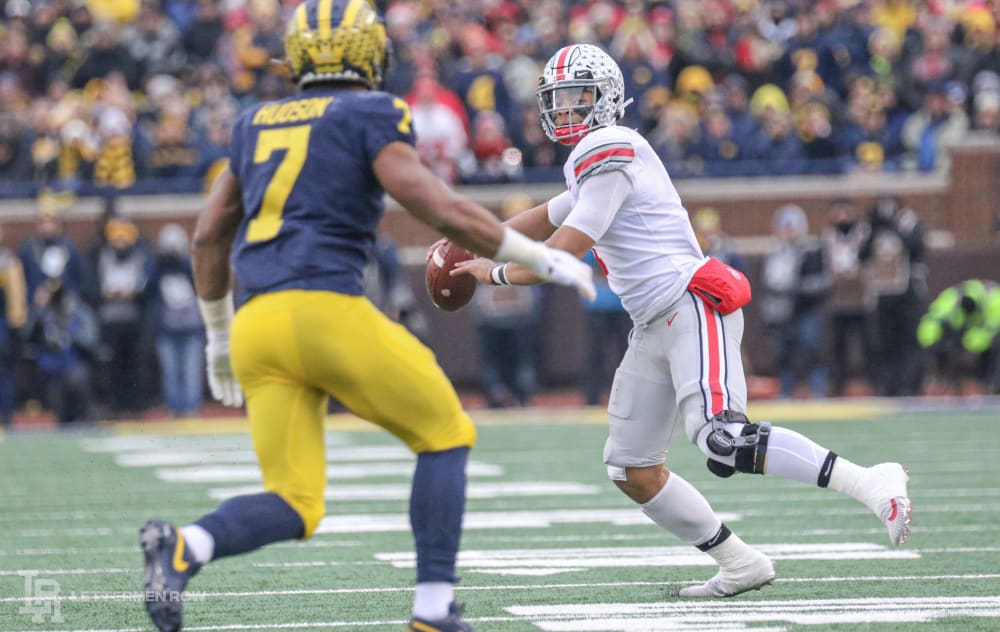 Ohio State quarterback Justin Fields has left no doubt about his toughness for the Buckeyes. (Birm/Lettermen Row)

The speculation, debate and conversations about Ohio State never end, and Lettermen Row is always ready to dive into the discussions. All week long, senior writer Austin Ward will field topics about the Buckeyes submitted by readers and break down anything that’s on the minds of the Best Damn Fans in the Land. Have a question that needs to be tackled, like the one today about how Ohio State and the status of the knee of Justin Fields? Send it in right here — and check back daily for the answers.

What is going on with Justin Fields?

He isn’t going to be the same explosive runner that he is when his knee is 100 percent. He’s going to be wearing a bulky brace that will somewhat limit his mobility. And he is absolutely going to play on Saturday night in the Big Ten championship game.

Those are the facts for the Ohio State quarterback as he hits the middle of his week of preparations for the rematch with Wisconsin. But from there, the picture gets a little less clear about what the most scrutinized knee sprain in the country really means for the Buckeyes.

How much will Ryan Day have to tweak his play-calling if Fields isn’t himself as a rushing threat? Will the knee impact his throwing? Was it his health or the weather when he got off to the shaky passing start last week at Michigan before bouncing back with a few moments that will never be forgotten in the history of The Game? Is this supply of toughness Fields brings to Ohio State truly as bottomless as it seems?

Those definitive answers will probably have to wait until primetime in Indianapolis for the Buckeyes. But based on the evidence available so far, Fields appears to be right on track to again lead top-ranked Ohio State and its prolific offense even if he’s not at full strength. 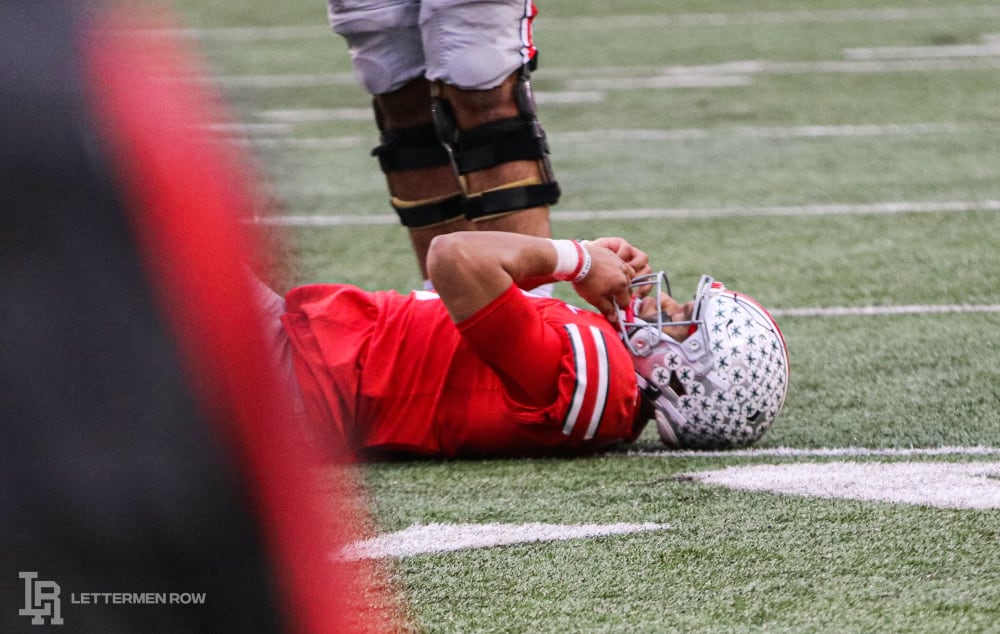 “I mean, it hurts right now, of course,” Fields said. “But I’m just going to try to get in the training room as much as possible and try to get back [to full speed] by Saturday. I mean, in my mind, I’m playing on Saturday and I don’t care how much it hurts. I’m playing whether it hurts or not.

“In the game, you can’t really worry about what’s on your body. You have to go out there and worry about scoring and putting points up on the board. Just having this stuff like a knee brace or a different shoulder brace or whatever, I don’t think it affects how you’re playing. It might to a little extent, but at the end of the day, you have to go out there and make plays.”

Fields has done that as well as anybody in the country at this point, and clearly the bigger knee brace didn’t bother him when he was stepping up in the pocket, rolling to his left and then planting his feet to deliver a Heisman-worthy, 30-yard touchdown pass in his first snap after re-aggravating the injury last week.

The sophomore has always prided himself on his passing ability, and he’s more than capable of winning games without being a dynamic rushing threat. The Buckeyes and Day produced one of the highest-scoring attacks in the country without one last year. And while Fields might not be quite the same passer as Dwayne Haskins, he’s probably still going to be more of a threat on the ground this week than his predecessor.

The knee will obviously bear monitoring early in the game on Saturday. But Ohio State wouldn’t play him if it wasn’t confident he could run the offense and without knowing for sure that it isn’t putting him in jeopardy of making the situation worse.

“You do everything you can to be successful,” Day said. “You know that you have to win games. It’s a must. So you do the things that put your guys in the best position to be successful schematically. But then you also understand that there’s risk to [running him]. You try to do the best you can to risk-reward it.

“It’s good to know that he’s so tough and he can handle that stuff. But there’s certainly risk that comes with it.”

The Buckeyes have done the calculations based on what it already knows. And Justin Fields has made it clear that he’ll be ready to go in the Big Ten title game.

Silverman: Ohio State buried Wisconsin once, primed to do it again
What B1G offensive awards got right, wrong for Buckeyes