Connect with us
Ohio State quarterback Justin Fields has accounted for 13 touchdowns in three games. (Courtesy/Ohio State Dept. of Athletics)

COLUMBUS — Justin Fields might not be all that surprised about his Ohio State numbers.

That doesn’t mean, though, that the Buckeyes quarterback isn’t impressed.

Already a Heisman Trophy finalist a year ago with some eye-popping statistics in the bank during his first season as a starter, Fields is somehow even surpassing the lofty standard and sky-high expectations for his junior campaign through three weeks. And even if he thought something like 13 touchdowns through three weeks while only throwing 11 total incompletions was possible, it’s quite another thing to actually go out and do it for the Buckeyes.

“I think it’s what I was supposed to do,” Fields said before practice on Wednesday. “Of course, the [numbers] are a little bit crazy. I didn’t expect them to be what they are now, but I think it’s definitely not surprising based on the way I worked in the offseason. So, I just think from all the work I’ve put in and all the time I’ve spent watching film, it’s paying off right now.

“The craziest? I would have to go with more touchdowns than incompletions, for sure. That’s the craziest one.” 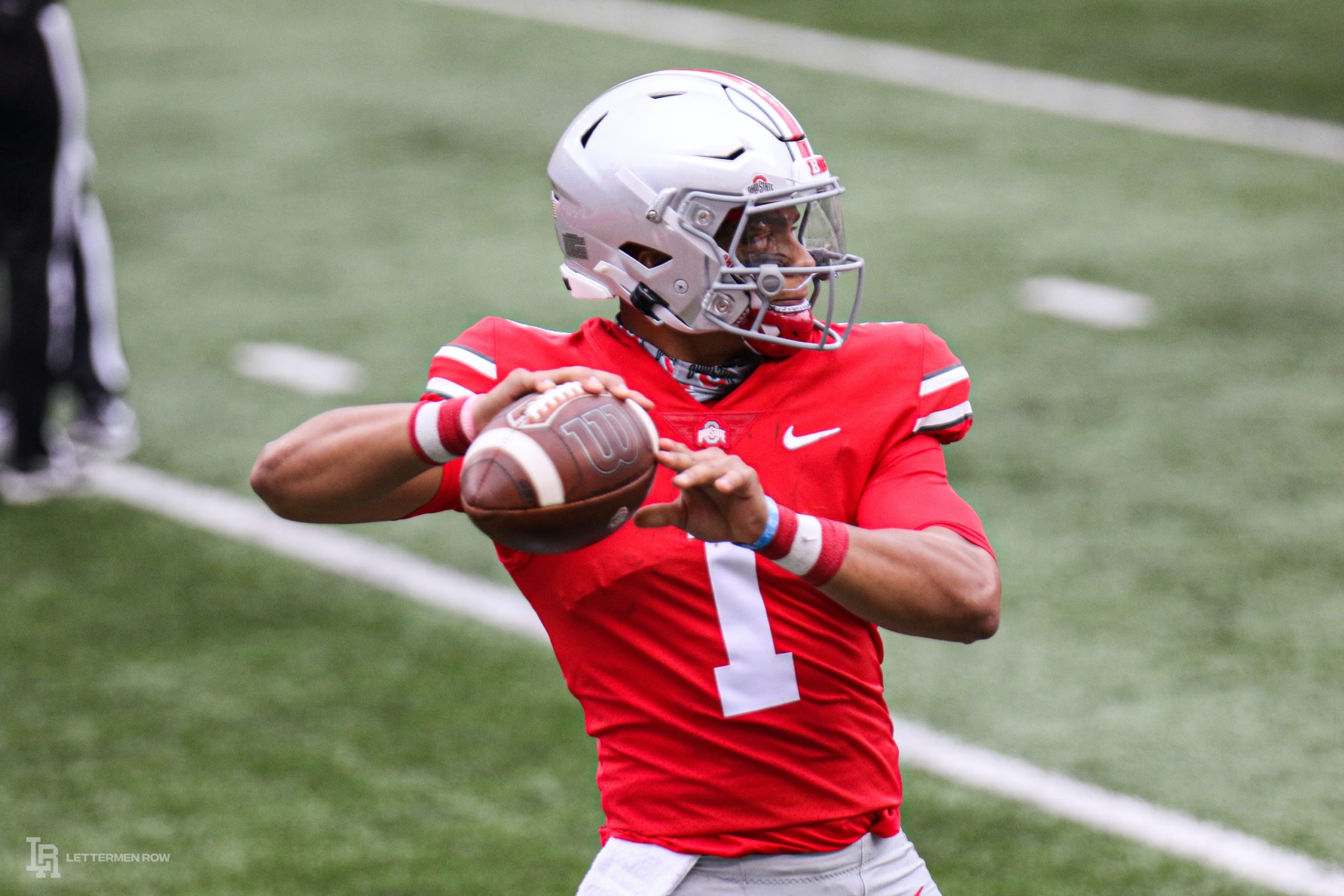 There are plenty to choose from at this point in the season, and a suspect Maryland defense could have offered yet another opportunity for Fields to build his case as the new odds-on favorite to win the Heisman before that game was cancelled on Wednesday.

Where to begin? Fields has thrown for over 300 yards per game against nothing but Big Ten opponents. He’s completing throws at an absurd clip of 87 percent — with several on-target drops actually causing that number to dip lower than it should be. And Fields is barely even scratching the surface of his dual-three ability, rarely using his legs as a rushing threat and only scoring twice on the ground so far this season.

The scary truth is that Fields only appears to be getting better.

“Of course I see [Heisman conversations] on social media, but at the end of the day, if I don’t continue what I’m doing even this week or next week, all that talk will be a moot point,” Fields said. “I’m not really focused on that. I’m just focused on staying consistent, just keeping the same routine and going out there and doing my best each and every play.

“You just have to prioritize what goals are more important to you. I think our team goals are first on my list, because I think people look at that at a different level. There are things with team goals and things you can accomplish as a team that make it hard to [evaluate] with numbers, like leadership and stuff like that. You can’t put that on a piece of paper and rate that. Team goals and accomplish those, winning games, I think people look at that differently.”

Justin Fields hasn’t lost a Big Ten game yet in his career, and that is the most important statistic of all. It turns out that streak won’t be on the line this weekend against Maryland, but his prolific production was a big reason why the Buckeyes were once again a heavy favorite.

Maybe it’s not a surprise to anybody at this point. But even Fields himself has taken notice that what he’s doing right now isn’t normal.

Ohio State quarterback Justin Fields was joined by teammates Tuf Borland, Luke Farrell and Jeremy Ruckert during an afternoon press conference from the Woody Hayes Athletic Center on Wednesday. Full comments from those Buckeyes ahead of the trip to Maryland are available below, and all Ohio State press conferences can be streamed live on the Lettermen Row YouTube channel.