COLUMBUS — Justin Fields was never supposed to be a finished product at the end of his first spring practice at Ohio State.

It’s also more than possible that the Georgia transfer still won’t be one by the end of summer or training camp with the Buckeyes.

Even for a quarterback with his physical gifts, there’s always a learning curve at such an important position. But the signs that Fields has the potential to be special for Ohio State are starting to pop up, whether in just a limited sample size in an exhibition or the way he’s carried himself with teammates during offseason workouts that reflect his willingness to become a leader.

And that’s obviously a big deal for the Buckeyes, who aren’t trying to force the issue but also can’t deny that their ceiling as national contenders will be impacted by just how quickly he can take control of the attack.

“I think the general overall knowledge of the offense was good,” Ohio State quarterbacks coach Mike Yurcich said last month. “I don’t think there’s just one thing with Justin where we can say: This is it. I think as a whole the improvement has to be well rounded, the growth has to be complete and in every aspect of quarterback play — including leadership. 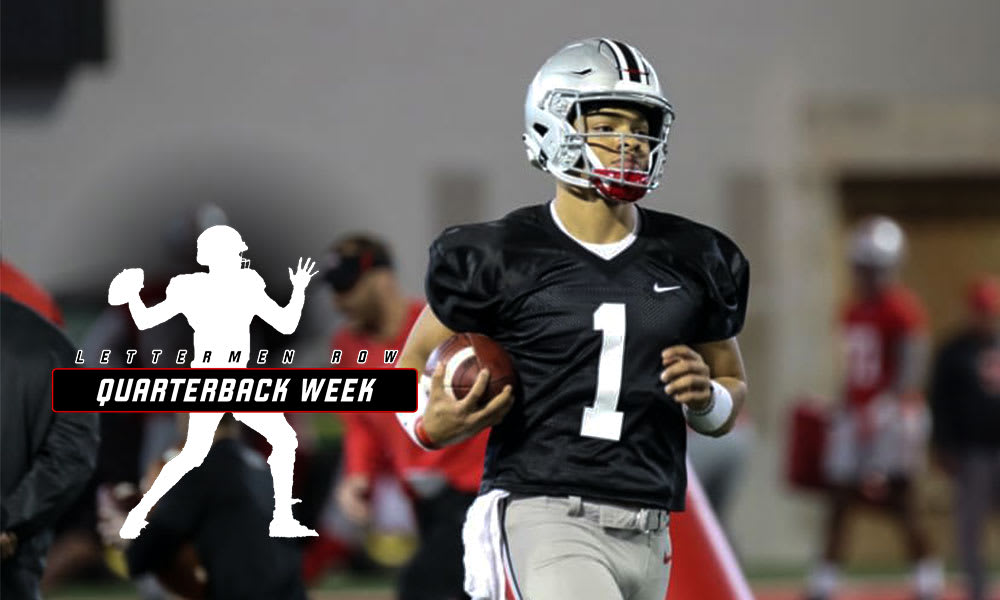 Ohio State quarterback Justin Fields will have enormous expectations on him this season. (Birm/Lettermen Row)

The full package wasn’t on display in April, and it was hard to get much of a read on a guy who only attempted 13 passes and also wasn’t allowed to be tackled when he was a rusher. Maybe that was by design as Ohio State kept Fields under wraps, maybe it was just the way the scrimmage flowed.

Either way, the first time in the Horseshoe for Justin Fields provided at least a glimpse at his talent and what he brings to Ohio State. Former Buckeyes quarterback and national champion Cardale Jones returned to the Lettermen Row film lab to break down that performance for Fields and look ahead at the next phase in the development process in the latest episode of BuckIQ.