Connect with us
Ohio State quarterback Justin Fields continues to grow for the Buckeyes. (Birm/Lettermen Row)

COLUMBUS — Justin Fields doesn’t need to prove anything more to Ohio State about his physical toughness by now.

Now it has even more evidence that the sophomore quarterback is just as strong mentally.

Combining both the number of hits that have started piling up for Fields over the course of the season with all kinds of adversity against a stout defense, in the rain and after fumbling a couple times, the Buckeyes got their best look of the season at what their offensive leader is made of last week. And after watching him respond time after time, it’s obvious why No. 1 Ohio State has so much faith in him heading into his first edition of The Game at Michigan on Saturday.

“Any time you see your starting quarterback on the ground, it’s not a good feeling,” Ohio State coach Ryan Day said. “He was able to shake it off, run off the field. We expect him to be fine. 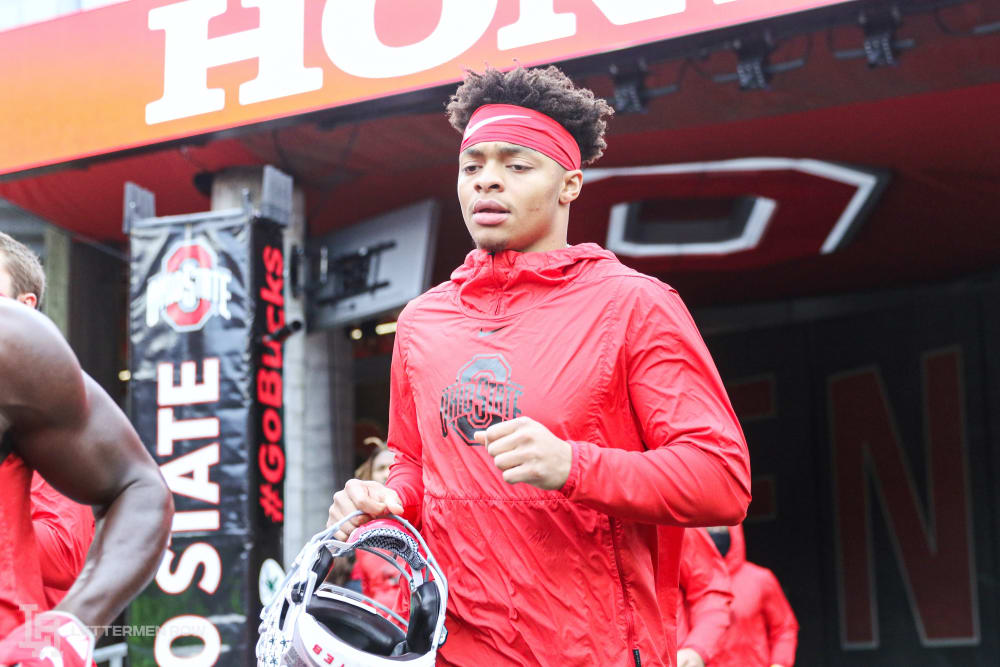 Fields has certainly had numerous opportunities to prove that this season, though almost all of them previously came in lower-stakes situations than he faced in the Big Ten East Division title game. Penn State put the dual-threat quarterback on the ground plenty last week, and the football found its way there three times as well — with the questionable second way potentially representing the kind of play that could have shattered confidence for both him and Ohio State as a whole.

But he responded with a clutch fourth-quarter drive to put the game away with an inch-perfect toss that only Chris Olave could catch for a 28-yard score to back up his mental fortitude. And physically, he did the same late in the fourth quarter after taking one more big hit, eventually getting up after some on-field attention and never even making a visit to the medical tent — before joyously sprinting to the locker room when the game ended.

No starting quarterback anywhere is going to feel 100 percent at this time of the season, and Fields isn’t an exception in that regard. But it’s becoming more clear every week that he’s not going to back down from anything Ohio State needs from him to win game.

How did Justin Fields handle the big-time pressure against Penn State? What is making Ohio State so confident that he can deliver even in the face of adversity? Where is there still room for the quarterback to improve heading into The Game? Former Ohio State quarterback Greg Frey was in the Lettermen Row film lab looking at the work Fields delivered on the way to the Big Ten East Division title to answer those questions in the latest episode of BuckIQ.

CFP Reaction: Why top-seed return could be huge deal for Buckeyes
Pete Werner looks to build on budding Buckeyes legacy in The Game
Advertisement