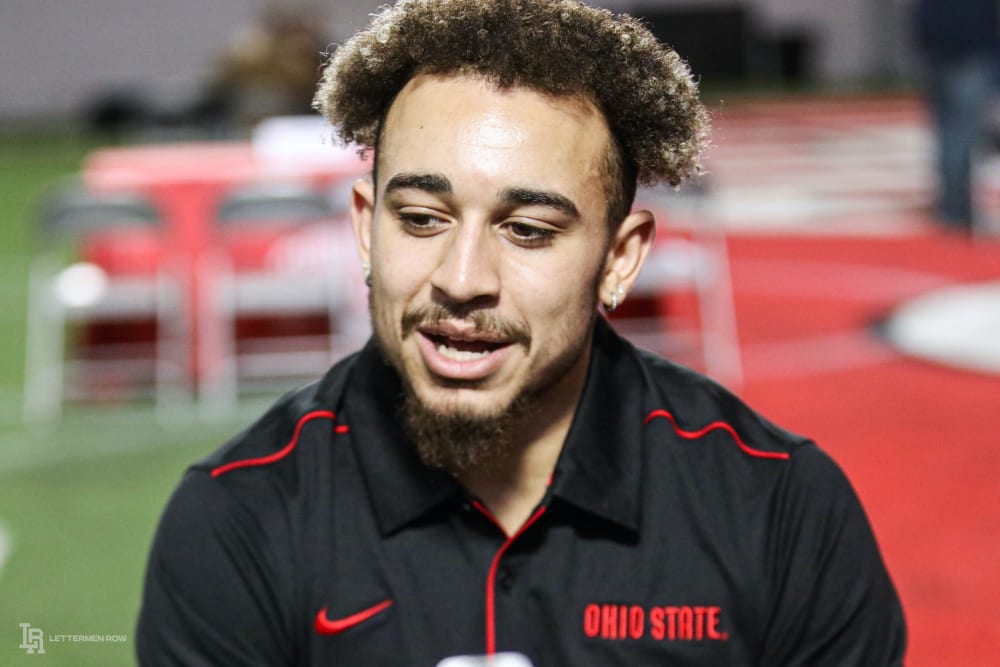 But one thing jumps off the screen every time the Ohio State signee and now early enrollee wide receiver touches the ball.

That is his ACK-ACK.

You’re reading it here first, the acronym yours truly came up with to stand for “Acceleration After the Catch.” Watch his video, and notice his ACK-ACK translates directly to massive YACK – the long-accepted abbreviation for “yards after the catch.”

It’s that explosiveness, coupled with his plucky hands, grand size (at least for a wide receiver at 6-foot- 2, 199 pounds), his general speed and his ability to gain position on defenders which saw him rise to a five-star designation and No. 3 overall prospect in the nation for the 2020 recruiting cycle, according to the 247sports composite of the major recruiting services. Indeed, he was No.1 in the ESPN300. 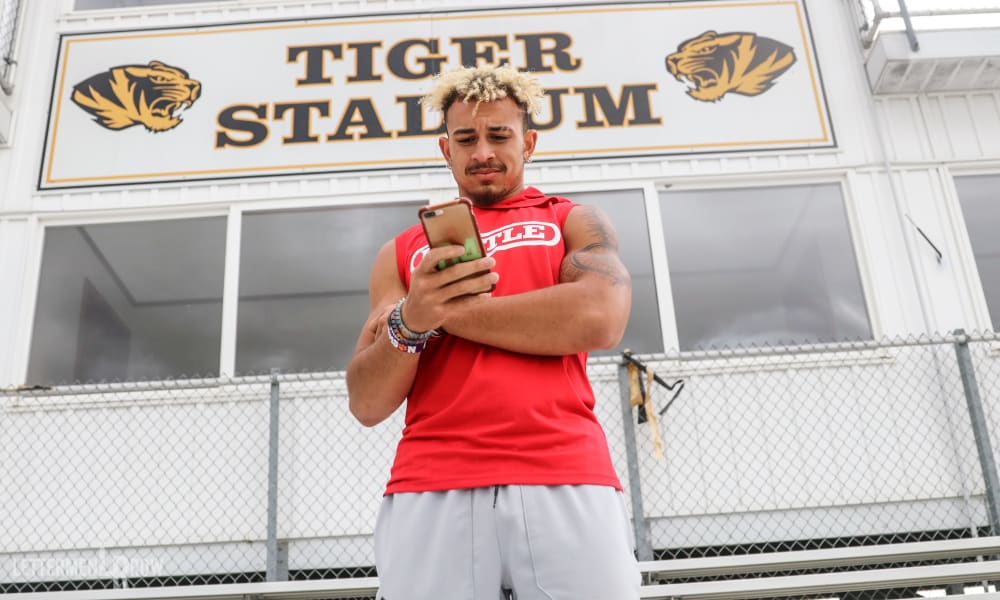 Julian Fleming arrived at Ohio State with work to do at wide receiver. (Birm/Lettermen Row)

But as he spoke with reporters last week for the first time since moving up from his Southern Columbia High School in Catawissa, Pa., to Ohio State, he said he knows the plaudits and videos from his prep days mean little at this point. It’s time to prove himself anew.

“Coming here now, I’m not rated anything,” Fleming said. “I don’t have any stars. I’m a freshman at Ohio State looking to earn a position.

“So it’s a completely different thing from high school because those rankings go out the door pretty quick.”

Pleasing football performance coordinator Mickey Marotti with his work ethic in winter conditioning drills, then his receivers coach Brian Hartline and the Ohio State offensive coaches are the priorities now along with asserting himself among his new peers.

“You have to earn your whole way up,” Julian Fleming said. “Nothing is given to you. You come to college and think you’re the cream of the crop, the best one – [then] you come to one of the top colleges in the country, you’re going to get put in your place real quick.

“In high school, yeah, sure, I was the top. I came here, I was at the bottom. And it’s just going to be gradually, working my way up to hopefully getting back to the top.”

He appreciates the way veteran C.J. Saunders has shown him the ropes from the start last month, even as Saunders, a captain last season, waits to hear whether he’ll gain another year of eligibility after a knee injury sidelined him last year. And Garrett Wilson, a fellow former five-star prospect who earned extensive playing time as a freshman last year, has been a reliable guide, too.

“Garrett, just seeing his production last year” proves a freshman can make an impact if he proves his worth, Fleming indicated. “C.J., just overall, he’s a great leader, a great person. I definitely can see him being a coach in the future if he has that option.

“Honestly, all of [the receiver group, which includes fellow highly rated freshmen Jaxon Smith-Njigba, Mookie Cooper and Gee Smith], we work out together, so it’s just constantly pushing each other to be the best we can be.”

For Julian Fleming, that chance to prove himself all over again starts now.