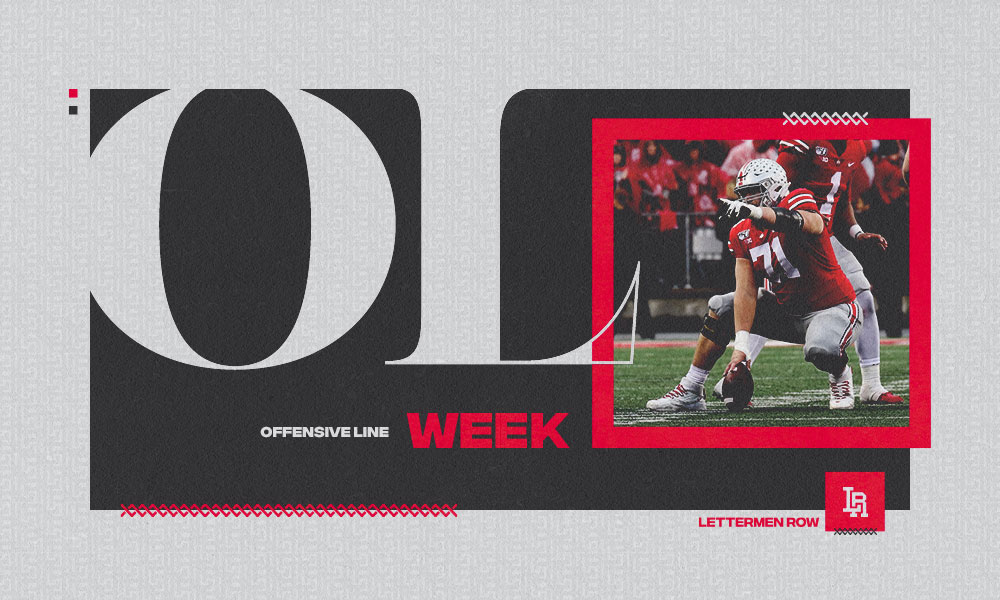 Josh Myers will be a Rimington finalist for Ohio State. (Sammy Silverman/Lettermen Row)

He certainly won’t be the last, either.

Myers never expected to make the move. He thought he would play guard for the Buckeyes and hopefully have a shot at the NFL — eventually. But that’s not the way his career played out. When now-Cincinnati Bengals offensive lineman Michael Jordan skipped his senior season at Ohio State to make his way to the NFL, Myers knew his destiny as the starting center for one of the nation’s top programs. And he knew the reputation the Buckeyes had for taking guards and making them into award-winning centers.

“I think a lot of it is that they value that position so much and in moving guards from center, they want someone vocal and who really knows the offense at center, making sure everybody is doing the right things,” Myers said before the Rose Bowl in 2018, before he ever started a game for the Buckeyes. “That’s why Pat [Elflein] did it, that’s why Billy [Price] did it, that’s why Mike is there now. … I didn’t ever think I would move to center. But I love it, I absolutely love center, it’s the best position I’ve ever played.

“The transition was a little rough at first. That first spring when I first started playing center, man, there’s just so much mentally coming at you. And I think I was probably lacking physically, too. I was so worried about making sure everything was right mentally, I wasn’t performing physically. Once I finally got some of that down, I started playing a lot better.”

Myers has embraced the center role for Ohio State. With a year as a starter already to his name, he’s going to be an All-American candidate. He’ll have a shot at the Rimington Trophy. That’s what comes with being the center at Ohio State. 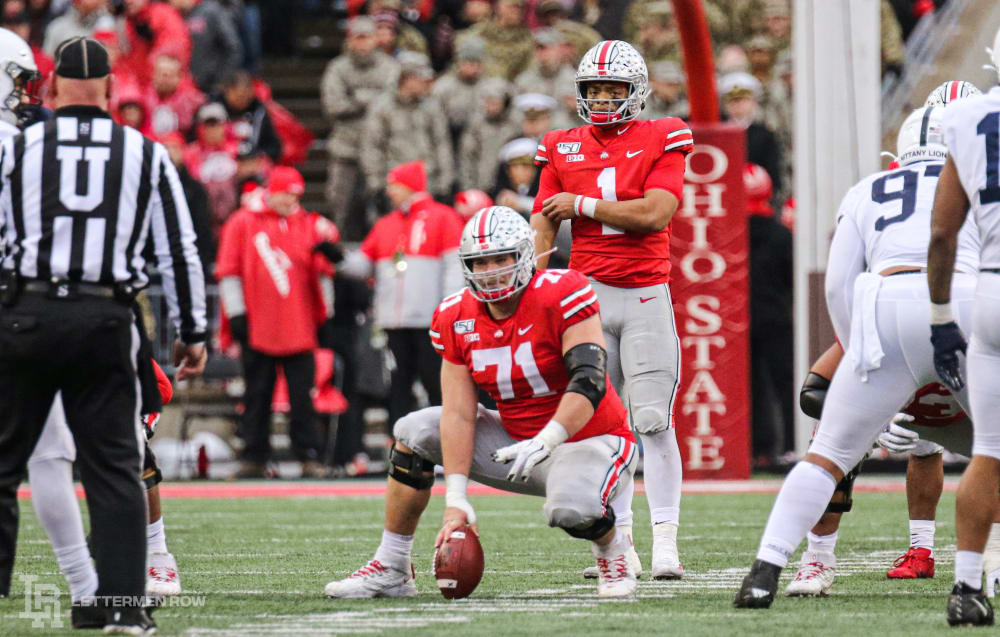 The walls inside the Woody Hayes Athletic Center don’t allow Myers to escape the pressure that comes with the position he’s in. All-American lists litter the interior of the building. Pictures of former Ohio State centers in the NFL are around the corner from nearly every meeting room. The reminders of back-to-back Rimington Trophy-winners, Elflein and Price, seem to be everywhere.

It can be a daunting task, being the starting center for the Buckeyes. It comes with massive expectations and great responsibility. It would be easy to be overwhelmed and choose to try blocking that out.

Take it from one of those Rimington winners, who also started his career at guard before sliding over to become the best center in America.

“It’s a great responsibility,” Price said. “You have an expectation. During your recruiting stage, you’re told to play at The Ohio State University, this is the expectation. You are to grow and develop into that dominant player, to being that guy, dependable, accountable, smart, toughness. The whole 10 yards.

“It’s an honor, but it’s an expectation.”

Price credits Urban Meyer for instilling the importance of the center spot at Ohio State, first referring to then-center Corey Linsley as the “apex” of the offense, meaning the point of the line. From there, the center was known as the apex to Meyer, and the importance continues to be stressed.

Of course, there was Rimington winner LeCharles Bentley and seven-time Pro Bowl center Nick Mangold, along with other greats before Meyer arrived. But once Meyer became the head coach in 2012, the lineage of great centers only grew.

“We’ve had a pretty decent run of guys who have won the Rimington, guys who have been drafted high like Billy and Pat, and had some decent success in the NFL,” Linsley said. “It is what it is. I’ll say one thing: Josh Myers is probably, he and Billy are probably the most physically gifted out of all of them.”

Linsley was first. Then Jacoby Boren, who was the center for the national title team in 2014. Elflein and Price had their seasons as Rimington winners before Michael Jordan took over for a year.

Then Josh Myers stepped in.

“He’s got all the tools,” Price said. “Thick body, wide kind of guy, strong. Smart guy, and I know he’s running things up front there.”

Myers could have used those tools to play guard, where he was a high-end four-star prospect as a guard in high school. Instead, he was needed at center, so he made the move. And he made it well.

It’s not easy, but the guard-to-center transition has proven to be effective for the Buckeyes in the last decade. There’s good reason for that, too.

“You understand what a guard has to do, his responsibilities, how that can translate, how you can help play at center,” Price said. “My transition playing in Cincinnati, I trained all offseason to play center, had to go play guard. You understand what the expectation is at center, so it does help you. Having the opposite knowledge helps continue to orchestrate a good offensive line.” 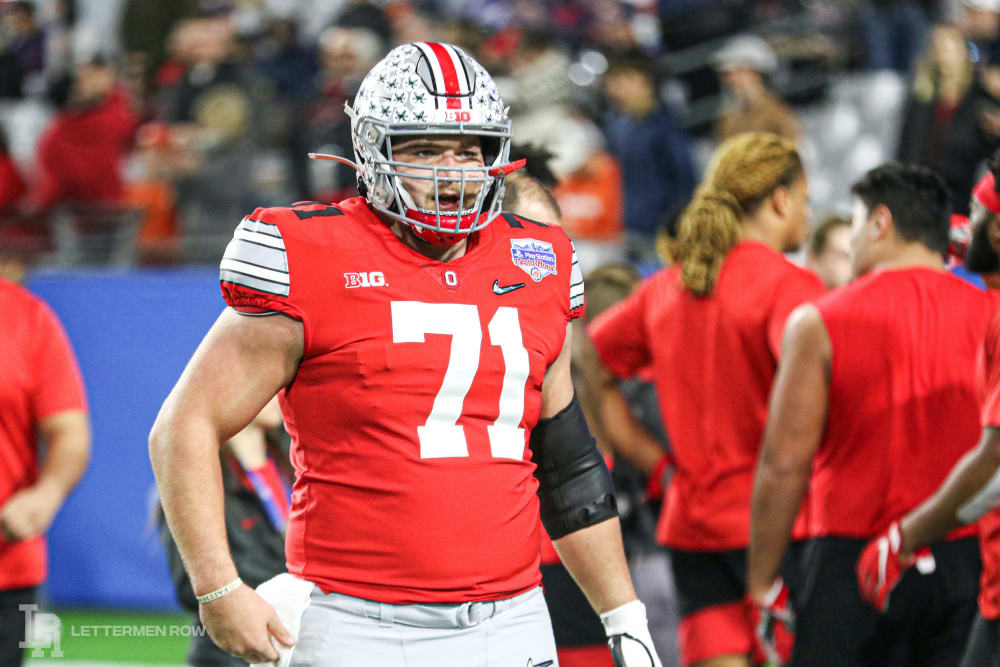 Josh Myers wants to win a national title with the Buckeyes. (Birm/Lettermen Row)

Myers had a lot to learn last offseason about becoming a dominant center along the offensive line for Greg Studrawa. He played beside an All-American guard and another guard who led the Buckeyes in knockdowns and was first-team all-conference. He’ll have the luxury of lining up beside that All-American in Wyatt Davis again this season, but that still doesn’t make his job at center any easier.

Myers returned to school for one more crack at a national title, knowing the expectations he will carry with him throughout the fall and into the College Football Playoff. He knows the expectations he faces in his second year as the apex of the offense.

But Myers chooses not to worry about expectations and holding up a legacy. He embraces the position he has to uphold. And in doing so, he’s writing the next chapter in the long line of greatness at center for the Buckeyes.

“I’m not thinking about it [now], but I appreciate you putting that in my mind — thank you,” Myers said back before that Rose Bowl, before he became a leader, with a laugh. “When you’re around it every day, I walk those halls and see it every day, I know it’s expected to play at that level every day, you just get used to it. Eventually you get comfortable with it, but at first, it’s incredibly uncomfortable because you know that’s the level of greatness you have to achieve.”

He doesn’t have to be overwhelmed by the historic run of centers he had to live up to anymore. Because now, Myers is part of that greatness that future centers will hope to replicate.

“It depends on what Josh Myers wants to do,” Price said. “The Rimington is a product of the work that you put in. You have to make yourself stand out compared to the other centers. I know that the Rimington committee, they like Ohio State guys. I’ll say that.”

That transition from guard to center may pay off for Ohio State once again. He has everything he needs to be great once again this season for the Buckeyes.

And after this season, whether he’s crowned the best center in college football like others before him have been, he’s going to move on and become part of the decorated history at center for the Buckeyes.

“The foundation with Josh is 100 percent there,” Linsley said. “The kid is extremely talented, and he’s had a good start to his career. It’ll be fun to watch him continue the tradition on, hopefully get the Rimington. If not, have a successful career in the NFL.”

The Buckeyes have the blueprint. And Josh Myers is following it to perfection so far.

Scarlet Sunrise: Pair of Buckeyes make latest preseason All-American list
BuckIQ: Ohio State has everything it could ever need on offensive line