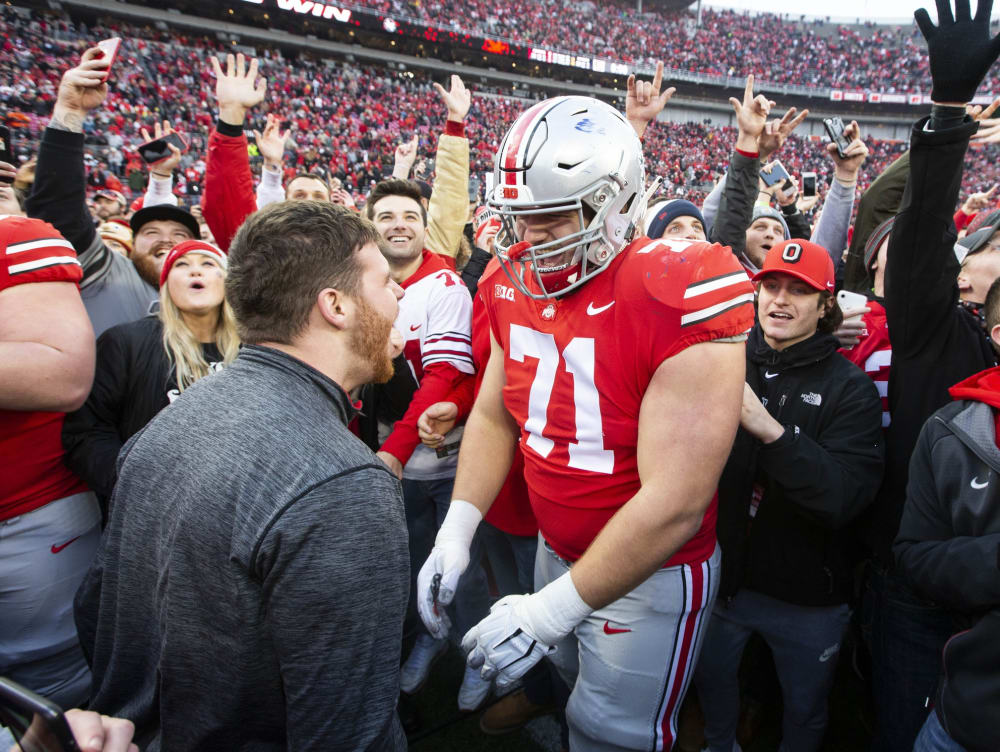 COLUMBUS — There is no escaping the reminders for Josh Myers, even when he’s thousands of miles away from Ohio State.

When he walks into the Woody Hayes Athletic Center, he’s grown accustomed to the Rimington trophies in the hallway, the All-American honors for the guys who have come before him and the overall emphasis placed on a position that is literally in the middle of every play for the Big Ten’s most explosive offense.

So, no, Myers didn’t need that entire list recounted for him before the Rose Bowl in a media tent where it had just become more clear than ever that he was the next guy in line at the all-important center position. The massive expectations that come with that job are certainly no secret to him.

“I’m not thinking about it, but I appreciate you putting that in my mind — thank you,” Myers said with a laugh. “When you’re around it every day, I walk those halls and see it every day, I know it’s expected to play at that level every day, you just get used to it. Eventually you get comfortable with it, but at first, it’s incredibly uncomfortable because you know that’s the level of greatness you have to achieve.

“When you’re young and when you’re not playing well, you think, ‘Wow, I’ve got a long ways to go.’”

Myers has already started making up that ground for the Buckeyes. And even if Michael Jordan had elected to return for another season, the program was already making plans for the rising redshirt sophomore to take over at center. 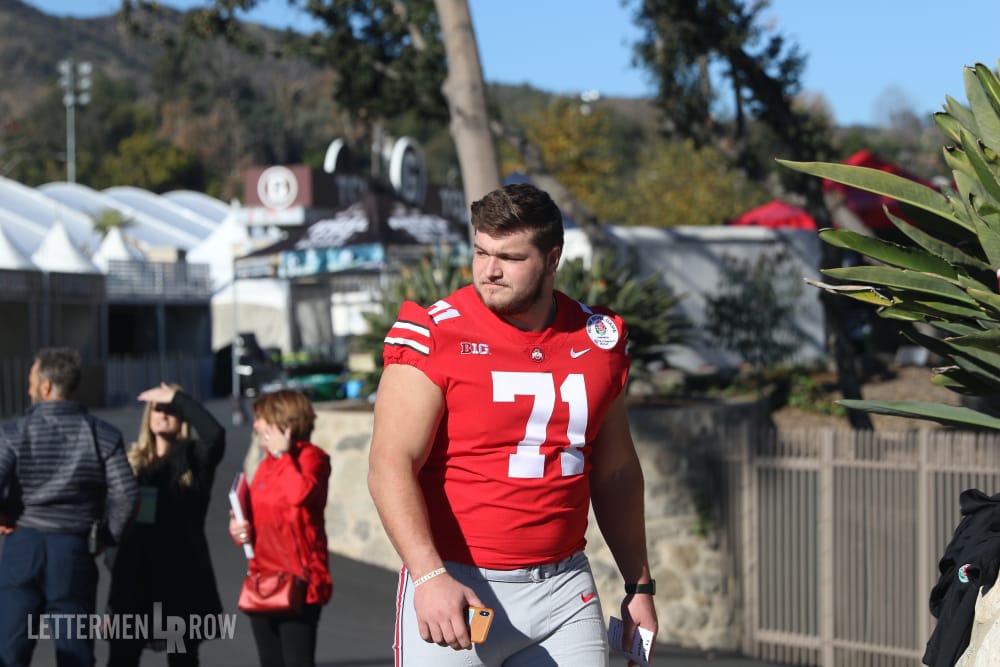 Ohio State center Josh Myers is in line for a starting role next season for the Buckeyes. (Birm/Lettermen Row)

Consider the accolades Jordan earned during his only season as he continued the rich tradition for Ohio State in the middle after back-to-back Rimington wins from Pat Elflein and Billy Price. It’s quite a tribute to a guy who has never started a game with the program that he was expected to slide into that role and allow an All-American pick to move back to guard.

Of course, now Myers is even more important to Ohio State with Jordan heading to the NFL, but that only makes that level of confidence more significant as position coach Greg Studrawa revamps the unit.

“Most of those bowl practices are about what happens in spring when we get back moving forward, how do we get that going?” Studrawa said. “Josh Myers, about halfway through the season, his light went on, his preparation changed, his ability to understand the offense, his ability to do certain things on a consistent basis — all of a sudden, it all changed. So now, he can go in and play that center spot.

“Now, the expectation is to play it at a high level. Obviously, you can look at the guys we’ve had here in the past. Two Rimington winners and then Mike goes over there and he’s an All-American on four different teams. You’ve got to play at a high level in this offense, and it’s a challenging spot.” 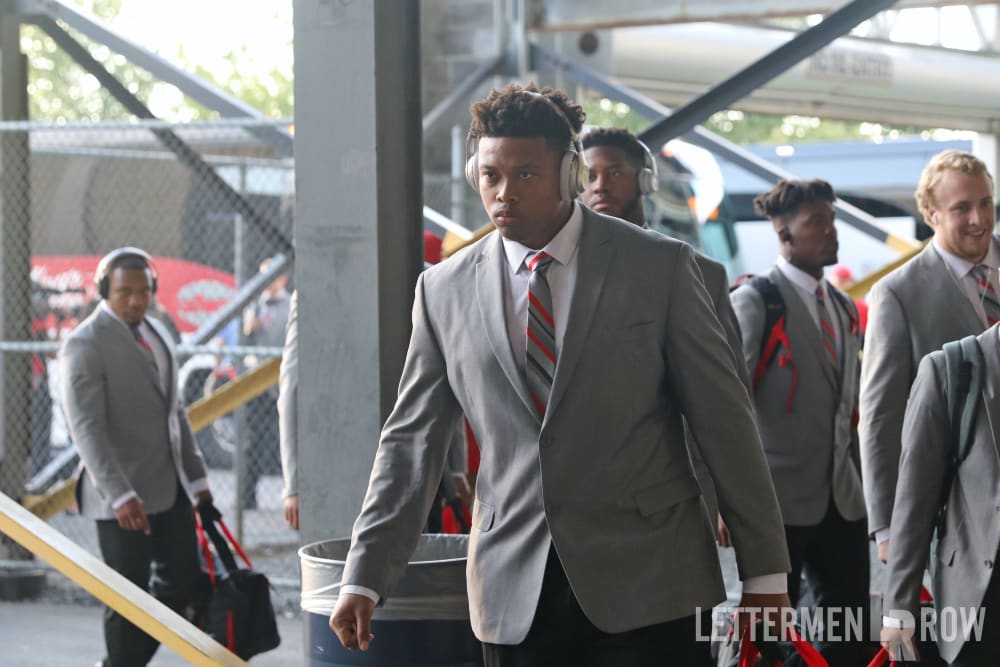 Michael Jordan continued the rich tradition for Ohio State during his only year at center. (Birm/Lettermen Row)

Myers found that out as soon as he moved to center, which the former four-star originally didn’t expect to play when he arrived at Ohio State as a guard. The amount of mental responsibility knowing every assignment on the field, the physical development that was required of a young player and then just handling the snapping duties all proved to be a difficult transition.

But all three of his decorated predecessors went through that same process after moving from guard to center. So, Myers isn’t the first and he almost certainly won’t be the last given how successful this formula has been for the Buckeyes.

“I think a lot of it is that they value that position so much and in moving guards from center, they want someone vocal and who really knows the offense at center, making sure everybody is doing the right things,” Myers said. “That’s why Pat did it, that’s why Billy did it, that’s why Mike is there now. … I didn’t ever think I would move to center. But I love it, I absolutely love center, it’s the best position I’ve ever played.

“The transition was a little rough at first. That first spring when I first started playing center, man, there’s just so much mentally coming at you and I think I was probably lacking physically, too. I was so worried about making sure everything was right mentally, I wasn’t performing physically. Once I finally got some of that down, I started playing a lot better.”

That obviously didn’t go unnoticed by the Buckeyes, who have tabbed Josh Myers as the early pick to become the next anchor of the offensive line.

And Myers is fully aware of just what will be asked of him moving forward. No additional reminders needed, thank you.