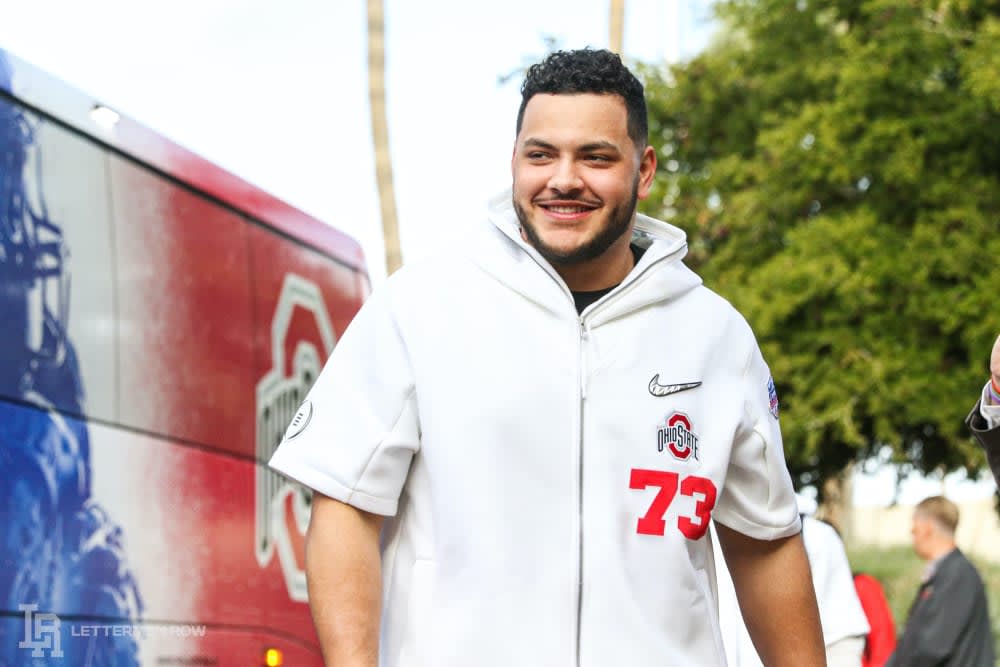 SCOTTSDALE, Ariz. – One of the primary questions both Ohio State particularly and college football experts in general have pondered for several months: Where would the Buckeyes be without the immediate impact of that fabulous offensive transfer?

As in sophomore quarterback Justin Fields, who rolled in from Georgia in January and wound up rising to a third-place finish in the Heisman Trophy race? Well, yes, him too.

But this is about fifth-year senior left guard Jonah Jackson as the Buckeyes head toward Saturday night’s College Football Playoff semifinal against Clemson. This time a year ago he’d long been finished with his fourth season at Rutgers. He played in the last three, a span in which the Scarlet Knights went 7-29.

Now heading into the Fiesta Bowl, he’s not only on a team that is 13-0, won the Big Ten championship for a third straight year and was ranked No. 2 in the final rankings — he’s also been a major component on what’s considered to be one of the elite offensive lines in the nation. More, first-year Ohio State coach Ryan Day has referred to the interior core of left guard Jackson, center Josh Myers and right guard Wyatt Davis as the best at their business.

“Honestly, if you told me I’d be here doing this right now, I’d probably laugh at you last year,” Jackson said. “But it’s just a blessing. Just to have these guys here, everybody around me, being in this group and being a part of this culture and such a historical program — it’s incredible.” 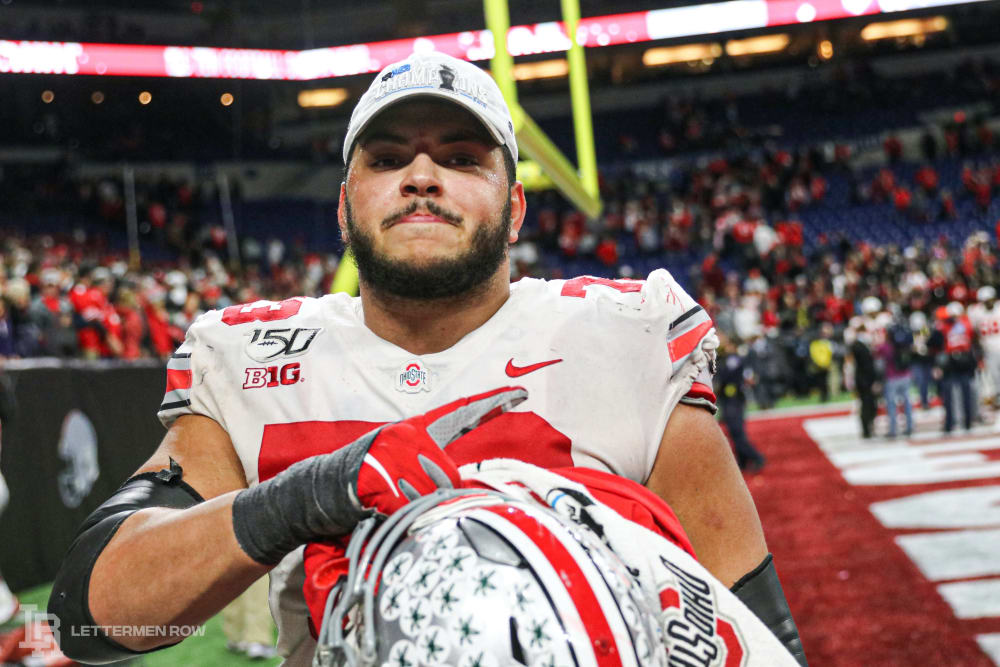 The feeling is mutual for the Buckeyes.

There were some others competing in the spring for the left guard spot in the pursuit of making the revamped line whole. The only returning full-time starter was left tackle Thayer Munford. Right tackle Branden Bowen had earned the top spot at right guard a couple of years ago before injuries sidelined him, so he had some starting position.

Myers and Davis were a couple of former five-star recruits who had bided their time behind more established players the previous two years, but anyone could see their readiness to step forward. The only question was solidifying left guard.

Then Jackson opted to transfer. He picked Ohio State, but couldn’t make the move over until late spring. Still it was easy for those on the outside to cede him the spot, taking into account how well he’d played last season for otherwise hapless Rutgers.

But would he be a fit — as in, would he fit in? Offensive line rooms are like hockey locker rooms. They house a band of brothers, the more successful being those who check their egos at the door for the good of the unit. Offensive line coach Greg Studrawa understood that it could be disruptive to introduce a new fellow to a dues-paying group. 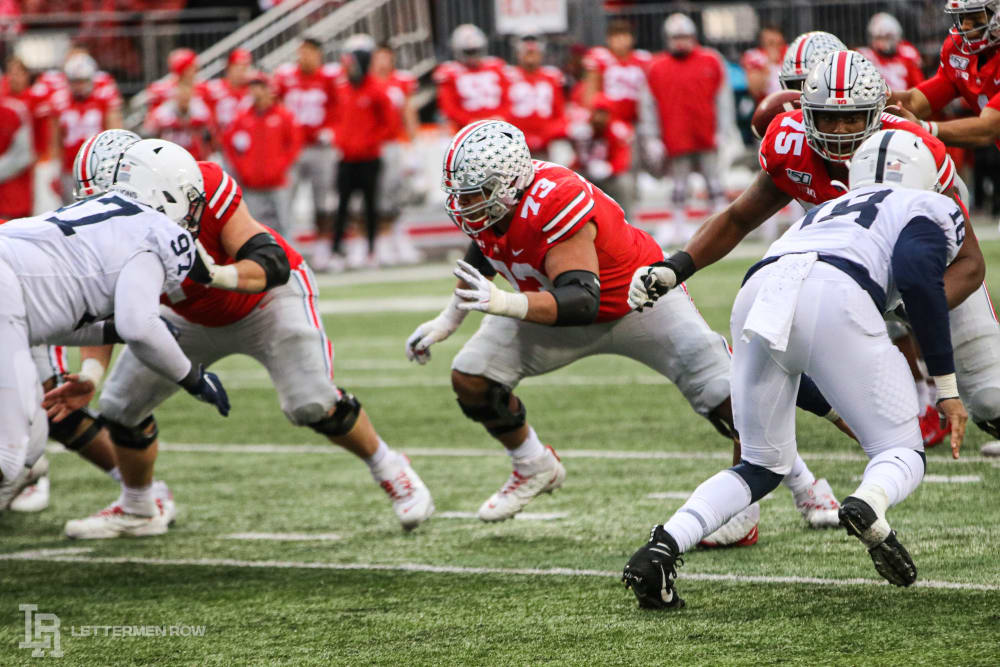 Ohio State guard Jonah Jackson has been a key cog up front for the Buckeyes. (Birm/Lettermen Row)

“Big time,” Studrawa said. “I spent the whole summer working on that alone, just them hanging out, getting to know each other, working together, so that when we hit camp it wasn’t new. … It was so tight when camp started: ‘Now we can move on to football.'”

Myers said the credit goes as much to Jackson as to those who welcomed him.

“Me and Wyatt were already jelled like that. We spent all of last season together,” Myers said. “I think that’s just a tribute to who Jonah is as a person and how he handles himself, and how well he did coming in here. It’s a hard thing to do, and just the way he carried himself through that whole process, and how professional he was.

“We all love him so much. Everything he’s done this whole process has been next to perfect.”

Though the coaches held their breath that Jackson would be accepted sooner rather than later, retrospect proves there was no reason to worry.

“Jonah Jackson was just the perfect guy at the right time for that room,” Day said. “He’s come in with a professionalism. It’s hard to walk into a room with so much pride as the offensive line room at Ohio State.

“So to walk in as a fifth-year senior, the way he handled himself was really great. And the way Coach Stud took him into that room, and the way that whole room embraced him has been tremendous. I think our offensive line has come together more than an offensive line has in a long time, from what I’ve seen, and he’s been a big part of that, even in the short time here.”

“What a mature kid,” he said. “He is such an intellectual kid, a mature kid, a smart kid, great work eithic. He came in and he dropped everything and said: ‘Whatever you want me to do.’ He didn’t bring anything with him like: ‘This is how I do it.’ It was: ‘Coach, how do we do it? I’m with you guys.’

“He jumped in and sacrificed everything for the team way faster than I thought he would.”

Jackson had an idea the group could be special, and he worked to prove he belonged.

“I sensed it probably the first week of practice,” he said. “These guys are legitimate players, and going against the defensive line we have and the defense we have, and their ability to handle them and go to work, it was like, ‘Wow, all right. We can really get things rolling here.'”

So much for an offensive line needing a year or two to jell.

“If you have a good group of guys who believe in each other and trust in each other and are able to execute things efficiently, it doesn’t matter how long you’ve been together,” Jackson said. “It’s just a matter of putting it together on Saturday.”

Yet what a contrast with the program from which he came, where wins were rare and where bowl trips, much less championship contention, were for other places. It’s made Jackson appreciative of the moment at hand, and the journey he took to get here.

“It’s being able to persevere through the ups and downs, being grateful for every opportunity given to me,” Jackson said.

Myers said Jackson’s gratefulness of being part of a grand winning team for the first time in his college career showed in subtle ways this season.

“We don’t really talk about it in depth,” Myers said. “But he will say, like when we beat Penn State, we’re in the locker room getting ready to leave, and he just kind of looked at me and was like, ‘This is the first time I’ve ever beat them in my entire career,’ just stuff like that.

“He’s doing so good, too. He’s so good. … I think he’s got to be as happy as he can be about how everything is going.”

And Jonah Jackson and Ohio State aren’t done yet.