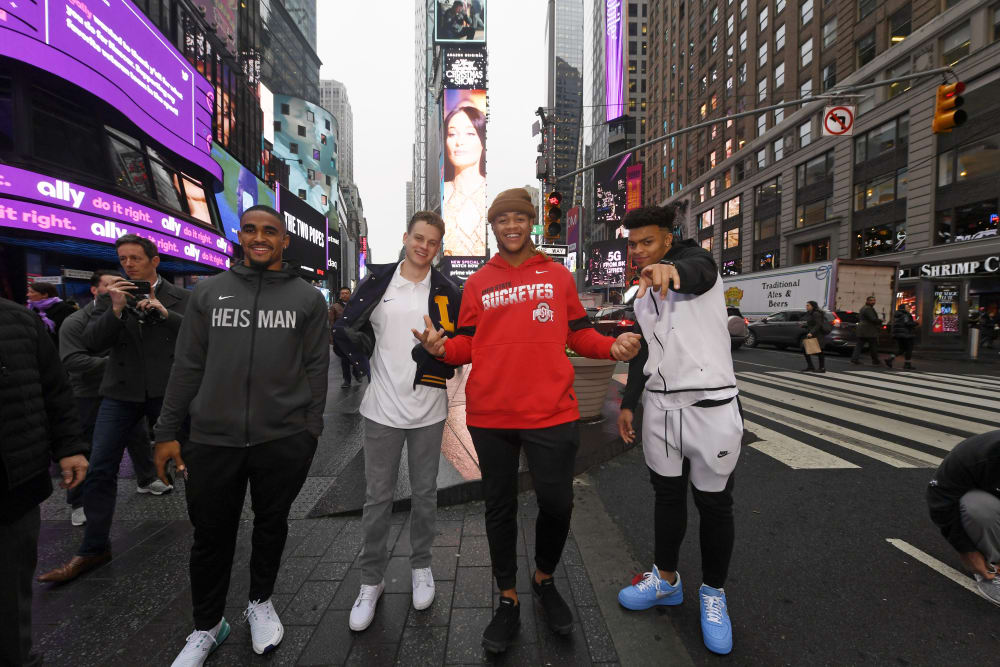 August training camp. Inside drill. The name of the Ohio State linebacker who hit him.

Even two years later, the former Buckeyes quarterback and Heisman Trophy sensation at LSU still instinctively rubs his right hand reflecting back on the injury that dramatically altered his career — and essentially changed the course of college football history.

“So, it happened during inside drill,” Burrow said at the Marriott Marquis. “Chris Worley thought I had the ball, realized it late and hit my hand. It was just a freak thing. My hand got caught in his pads, and I knew I broke it immediately.

“I mean, I think it altered the course of my whole career. I tried to come back way faster than I should have and couldn’t really throw the ball for a while. I do think about it all the time.”

Obviously everything has worked out just fine for Burrow, who has lit the SEC on fire and has LSU unbeaten heading into the College Football Playoff. 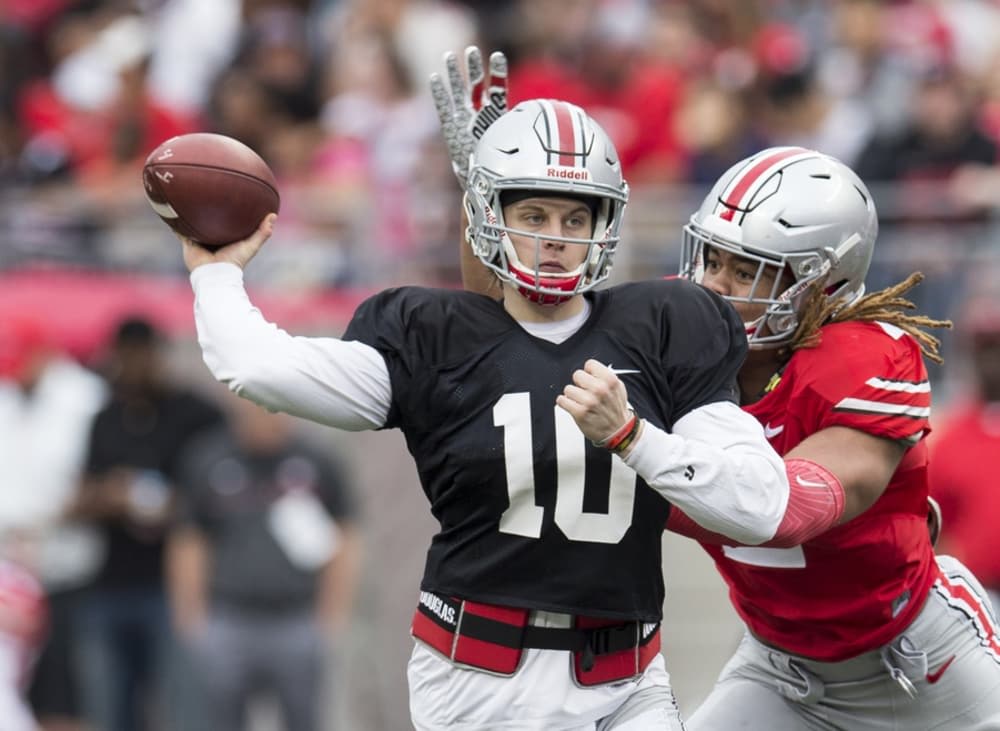 Ohio State once had future Heisman finalists Joe Burrow and Chase Young competing against each other in practice. (Greg Bartram/Imagn)

And for the Buckeyes, there are no hard feelings or complaints either moving forward with their own unblemished record and the possibility they could meet the Tigers in the national championship game. It obviously also helps that Dwayne Haskins finished his season as the starter right here in Times Square as a Heisman finalist after beating out Burrow, and Ohio State has another quarterback at the ceremony this weekend after Justin Fields took the reins this year.

But it still makes for a fascinating what-if scenario, and the alternate timeline could be a barroom debate for years to come in Columbus. If Burrow had kept that hand out of harm’s way in training camp, would he have pulled ahead of Haskins in the heated, neck-and-neck battle for the backup job? Could he have been the guy to come off the bench to rally the Buckeyes at Michigan, giving him the lead heading into spring camp?

If Haskins had transferred, would Burrow have followed the same trajectory and been a first-round pick last year? Would the appeal of the Ryan Day offense still been enough to entice Fields to transfer from Georgia, or would Burrow still be in charge at Ohio State and gunning for a national title to cap his legendary career in his home state?

It’s dizzying to spin out all the possibilities, and obviously in the end the debate doesn’t really matter or change anything. But two seasons later, it’s worth a reminder of just how delicate the situation can be at quarterback. One unlucky break played a significant role in changing everything for both Ohio State and Burrow — even if it worked out as well as could have possibly been imagined for both parties.

“Honestly, I never really thought about [the Heisman], I just tried to do what I needed to do to win football games,” Burrow said. “It would mean a lot to everyone that has helped me along on my journey — from youth coaches to middle school, high school, Ohio State, LSU. I think it would mean a lot to a lot of people. I just try to do whatever it takes. This season it was throw for 4,700 yards and 48 touchdowns. 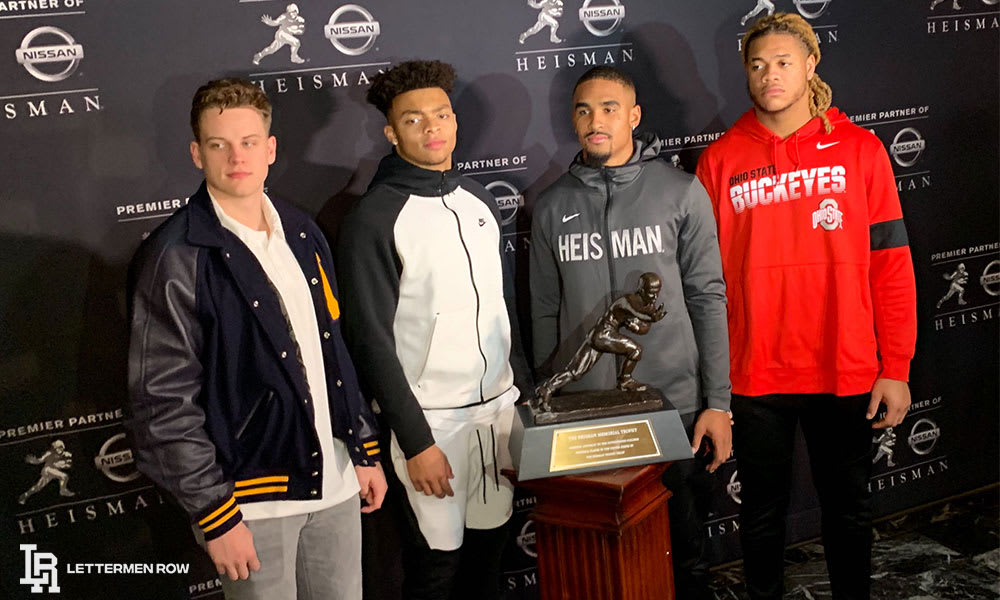 “The injury probably set me back a little bit, yeah. But [Haskins] did a great job coming in against The Team Up North and winning that game, so I think he kind of had the inside course because he came in and won that game.”

Burrow obviously still doesn’t call Michigan by name and continues to show his love Ohio State, where he earned his degree before heading to the bayou. Meanwhile, Ryan Day and the Buckeyes have proven repeatedly over the last two years that they’ll relish any opportunity they get to watch him play, and they still tell stories about Burrow’s competitiveness, jokes and the ability that would make him a star.

Both will occasionally admit to looking back and wondering what could have been different, and Chase Young has taken to cracking jokes this week to Fields about how he wouldn’t be the starter at Ohio State if Burrow was on the roster. That part is also up for debate given how remarkable Fields has been during his first season as a starter, and if the sophomore had been able to play more four-quarter games, his stats could have blown Burrow’s out of the water.

That, of course, is another hypothetical that can’t be definitively answered. Anyway, right now the primary focus for everybody is on what’s next and what could be a drama-filled reunion in New Orleans.

“Yeah, we always knew he could do this,” Young said. “Joe definitely played the way it takes to win the Heisman, and I’m not surprised.

“Joe is one of the hardest-working guys in any locker room. He’s just like that perfect student-athlete, for real. And we knew that wherever he went, we kind of expected him to take over — because we just knew who Joe was.”

The Buckeyes were also there when the journey for Joe Burrow took an unexpected turn. And they might just be back on the same field with him with a chance for another historic moment in the College Football Playoff.