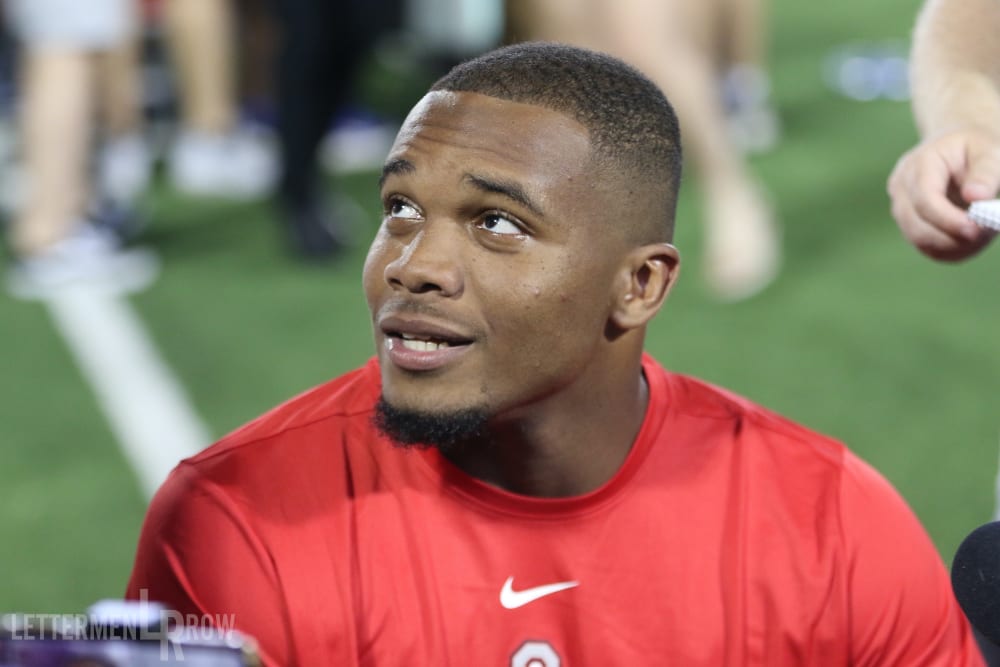 Ohio State tailback J.K. Dobbins is poised for a big season with the Buckeyes. (Birm/Lettermen Row)

The speculation, debate and conversations about Ohio State never end, and Lettermen Row is always ready to dive into the discussions. All week long, senior writer Austin Ward will field topics about the Buckeyes submitted by readers and break down anything that’s on the minds of the Best Damn Fans in the Land. Have a question that needs to be tackled, like the one today about the Ohio State and J.K. Dobbins? Send it in right here — and check back daily for the answers.

Dobbins beefed up quite a bit this off season. From observations at camp has the additional size slowed him up at all, or did it just make him more brutal?

How did the offseason conditioning program turn out for J.K. Dobbins? The only thing questions like that have done is bring a smile to the face of the new Ohio State captain.

The junior didn’t give any specific times for his 40-yard dash, simply joking that he’s still fast. He didn’t talk about how much weight he can lift now, though he acknowledged his body fat had dropped to 8 percent. And after again calling last year a failure and doubling down on Monday by labeling it “terrible,” Dobbins left no doubt that he’s as motivated as he’s ever been for the Buckeyes.

How does Dobbins look? Even when the Ohio State coaching staff doesn’t want to single anybody out for attention, his name comes up anyway.

“Without selling somebody short … I will say on offense I think that J.K. Dobbins has really run hard in this camp,” Ohio State coach Ryan Day said. “He has his pads down, he’s playing with speed. I think that’s significant.”

That’s particularly important for a legitimate national-title contender that will be spending the first few weeks of the season likely leaning on the rushing attack more than it would ideally want while Justin Fields settles into his role at quarterback.

Dobbins is going to be Fields’ best friend in the opener and during the month of September, and there’s no doubt the tailback did everything within his power to get his body right for a heavier workload. Already a rusher with two 1,000-yard seasons under his belt, the ceiling appears to have been raised for just what Dobbins can produce this season — physically, mentally and in terms of opportunity now that the Buckeyes won’t have him splitting carries with Mike Weber.

Perhaps more than the improvements Dobbins made with a body that was already built to play the position, the maturation process seems to have really made the difference for him.

Throughout the offseason, Dobbins has been blunt with his assessments that he didn’t do enough for Ohio State and was pressing too hard to make something happen when it was his turn in the backfield timeshare. And he’s also become more comfortable as one of the public-facing representatives for the Buckeyes, embracing a leadership role, becoming a captain and not shying away from speaking his mind when it comes to personal goals or a national-championship-or-bust standard for this season.

So, how has J.K. Dobbins looked in training camp? Easily like the best version of himself yet.

“You can kind of get a feel in practice,” Dobbins said. “But I mean, it doesn’t matter until you do it in a game.

“I feel like I need to prove to people that I am the best running back in the nation. I’m just working to do that. I’m going to take it day by day.”

Dobbins obviously has made the most of them during the offseason and training camp. Now the proof is about to be on display in the Horseshoe next week.

Continue Reading
You may also like...
Related Topics:Featured, J.K. Dobbins