Connect with us
J.K. Dobbins has shown his versatility and dominance for Ohio State this season. (Birm/Lettermen Row)

Maybe at some point the Buckeyes junior will be ready to call his work a success and finally erase the memories of the season a year ago that he called a failure. But there’s far too much football left ahead of Dobbins for him to even consider awarding himself a passing grade.

And while there may only be three players in the country with more rushing yards than Dobbins, that’s three too many for his liking considering his oft-stated goal of being the best tailback in the country. So, even coming off another impressive performance that is making it clear he’s playing at the highest level of his career, Dobbins will head into Saturday’s matchup with a vaunted Wisconsin defense expecting even more from himself.

“Not quite [there], not quite, not quite,” Dobbins said. “I just have to have an amazing game. I’ve got to do amazing things, and I feel like I haven’t done that yet. 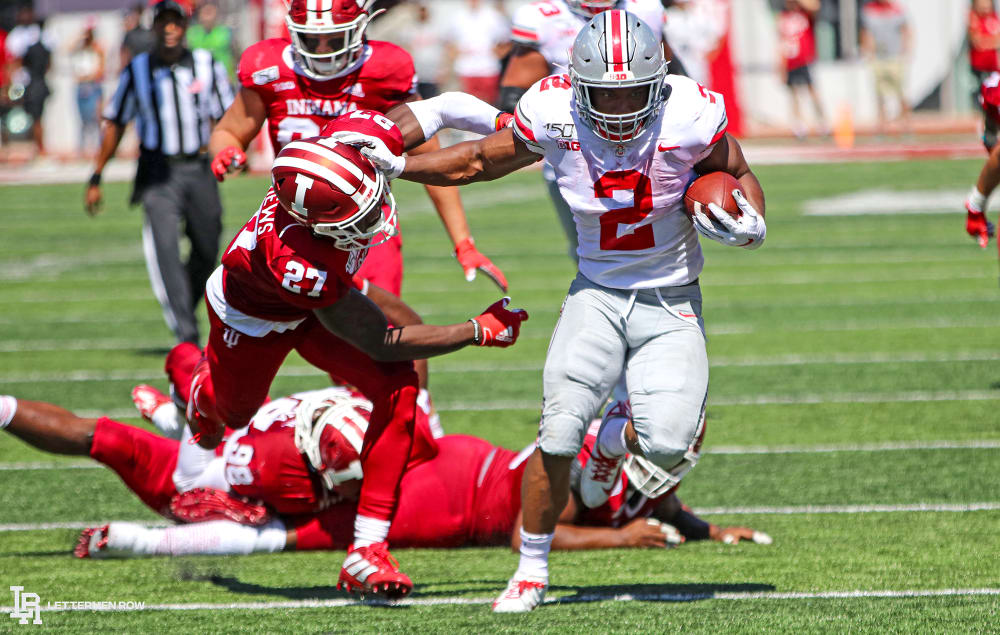 Ohio State tailback J.K. Dobbins has been terrorizing tacklers all season for the Buckeyes. (Birm/Lettermen Row)

Improved, yes. But a finished product? Not in the mind of Dobbins, and there’s no question that he’ll be even more motivated to take a step forward and strength his case as the top tailback in the Big Ten in what amounts to a head-to-head duel with Wisconsin’s Jonathan Taylor in the Horseshoe this weekend.

Even if Dobbins isn’t satisfied yet, it’s hard for the Buckeyes to find much to complain about with the do-it-all weapon in the backfield as he comes off another two-touchdown game that showcased his ability as a rusher, receiving threat and solid blocker. But if he wants to give even more, obviously Ohio State won’t have any problems with that.

What has allowed J.K. Dobbins to take the next step for Ohio State this season? Can he possibly give the Buckeyes more down the stretch? Is he the best running back in the country? Former Ohio State and NFL tailback Beanie Wells was in the Lettermen Row film lab breaking down the film and trying to answer those questions in the latest episode of BuckIQ.