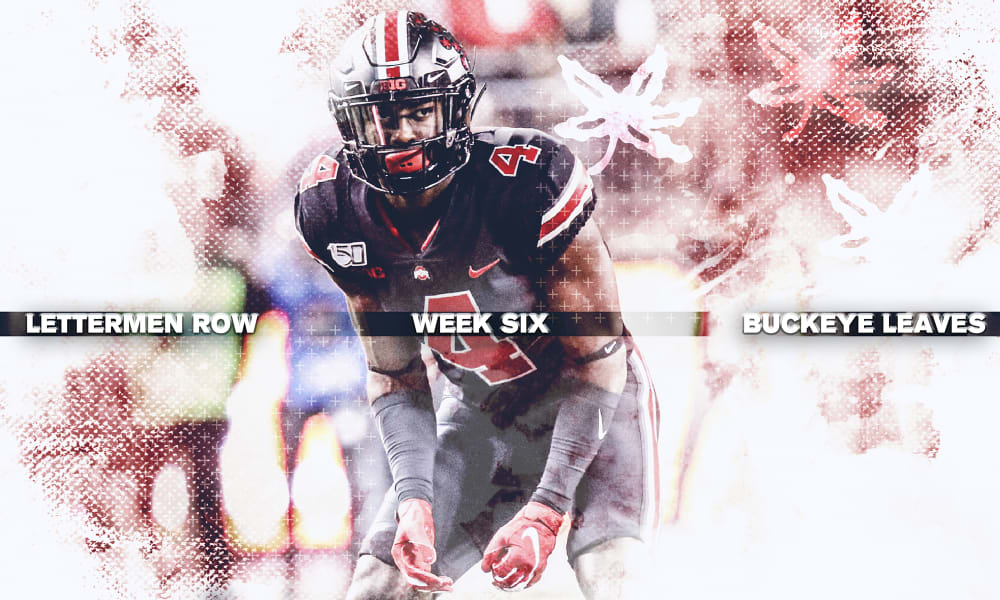 COLUMBUS — Ohio State safety Jordan Fuller has been solid since he first started playing for the Buckeyes. Fuller rarely does anything flashy. He just moves quietly and lead the team in tackles when it doesn’t even seem like he’s having an impact on the game.

But when he makes a play aside from the casual tackle, it’s a game-changer. Interceptions in back-to-back Michigan games the last two years. A pick at Nebraska last week. A game-sealing interception to accompany seven tackles in a 34-10 win over Michigan State on Saturday night.

Fuller’s 80-yard interception return for a touchdown put a cap on the big win — until the Buckeyes who were celebrating in the corner of the south end zone finally saw the yellow cloth 50 yards from where they were. Yes, the touchdown was wiped off the board, but Fuller still got the interception.

It was just another glimpse of how good this Ohio State defense, led by Fuller, can actually be.

“It’s just a tribute to our hard work and believing in each other,” Fuller said. “And staying with each other. That’s really what it is. I think it’s just the brotherhood. You kind of see how strong it is. Last year was kind of tough, but we just said: ‘Let’s forget it and try to move on and stick together.’

“That’s what I think we’re doing.”

What they’re doing is suffocating opposing run games and not giving up anything easy in the pass game. Fuller holds down the back end with Damon Arnette and Jeff Okudah, while Chase Young keeps proving he is the best defensive player in America.

Young was applying the pressure that led to the errant Brian Lewerke throw, which was tipped before landing in Fuller’s arms. He thought it was an incomplete pass — until he heard the crowd roar. As he looked down field and saw his teammates celebrating Fuller’s pick-six, he knew it was coming back. But he also knows the interception was key for Fuller and the Buckeyes.

“It ended up being a flag, but it was still a pick, though,” Young said with a smile.

As always, Lettermen Row has some Buckeye Leaves to hand out for Ohio State and its dominant win, and Fuller’s performance certainly earned him one. 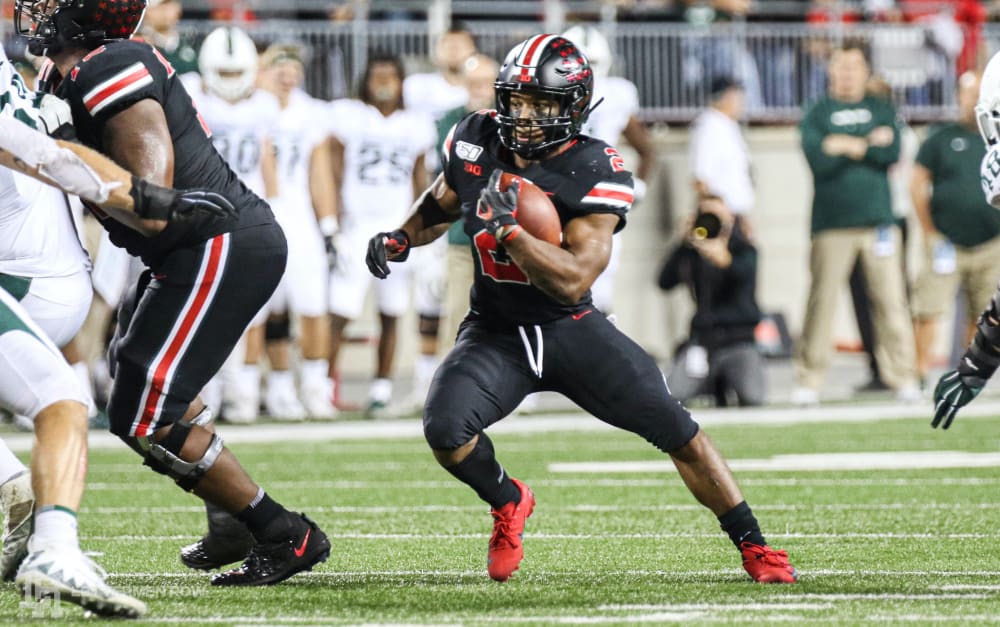 J.K. Dobbins just keeps giving people a reason to believe he’s one of the best running backs in the country. Dobbins and the Ohio State offense struggled through the first quarter. A play after Dobbins trucked a defender on the sideline, the Buckeyes scored a long touchdown. Later in the second quarter, the dam in the Michigan State defense finally broke, and Dobbins got loose for a 67-yard touchdown run to put him over the 100-yard mark for the 13th time in his career. With every Dobbins carry, Ohio State grew more comfortable attacking the Michigan State front that tested the offense. Dobbins finished with 172 yards on 24 carries with that touchdown run in Ohio State’s first win over a top-25 team this season. 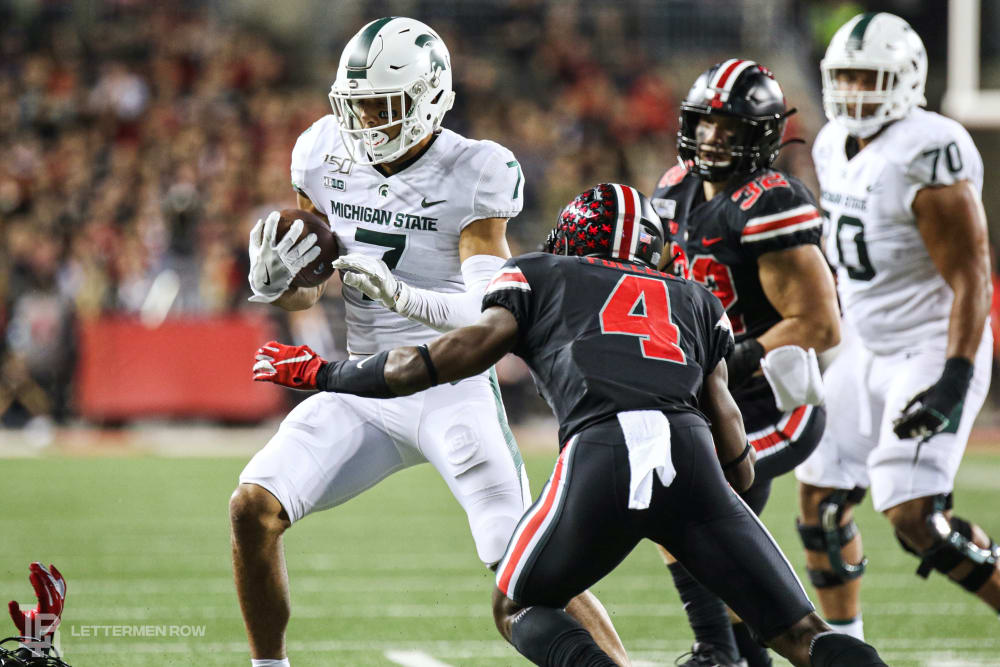 Fuller had seven total tackles and a fourth-quarter interception of Michigan State quarterback Brian Lewerke that ended the small chance the Spartans might have had at an attempt for a miracle. Fuller took the interception off a tipped pass and ran down the Michigan State sideline, zig-zagging his way into the south end zone with a convoy of Buckeyes ready to celebrate an 80-yard pick-six. Instead, it was called back due to a questionable blind-side block on Baron Browning. Fuller still made the play, though, and the interception still counts on the stat sheet. Pair that with the seven tackles, and he had a good night. 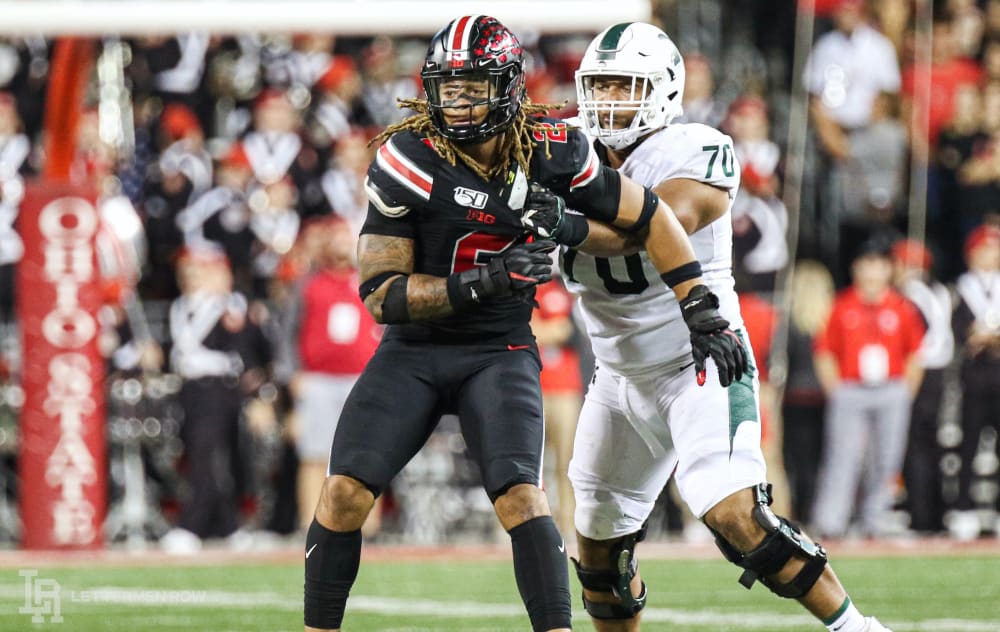 Young didn’t do anything that will show up in the box score on special teams, but that’s just because fear isn’t a stat. On Michigan State’s first field goal of the night, Young came inches from blocking the kick that ended up getting knocked through the uprights. But the second attempt, a third-quarter field goal try that would have given Michigan State points on its first drive of the second half, missed wide right due to pressure from Young. It was apparent that Young altered the kick and forced the miss. Oh, and he appeared on the punt return unit as well. Even when he’s not doing anything special, he’s impacting the game.