Connect with us
Ohio State tight end Jeremy Ruckert is poised for a breakout season next year. (Birm/Lettermen Row)

COLUMBUS — Jeremy Ruckert surely could have taken an easier path.

He could have found a place that only wanted to take advantage of his skills as a receiver. He could have gone into an offense that would feature his position more in the passing attack. And as the top-ranked player in his class at tight end, every option was available to the New York native when he was making his college choice.

But Ruckert tabbed Ohio State for a reason, fully aware that it might take a couple hard years of development to become the kind of tight end the program builds around — and that NFL teams crave. He’s still not done with that process yet, of course, but his sophomore season certainly offered plenty of signs that he’s well on his way to becoming an elite, all-around weapon at a position that generally doesn’t capture the spotlight much for the Buckeyes.

“I knew if I came here, I wouldn’t be able to get on the field if I didn’t learn how to pass protect and run block,” Ruckert said. “I think learning how to do those two things the last couple years has been crucial in developing me as a player. 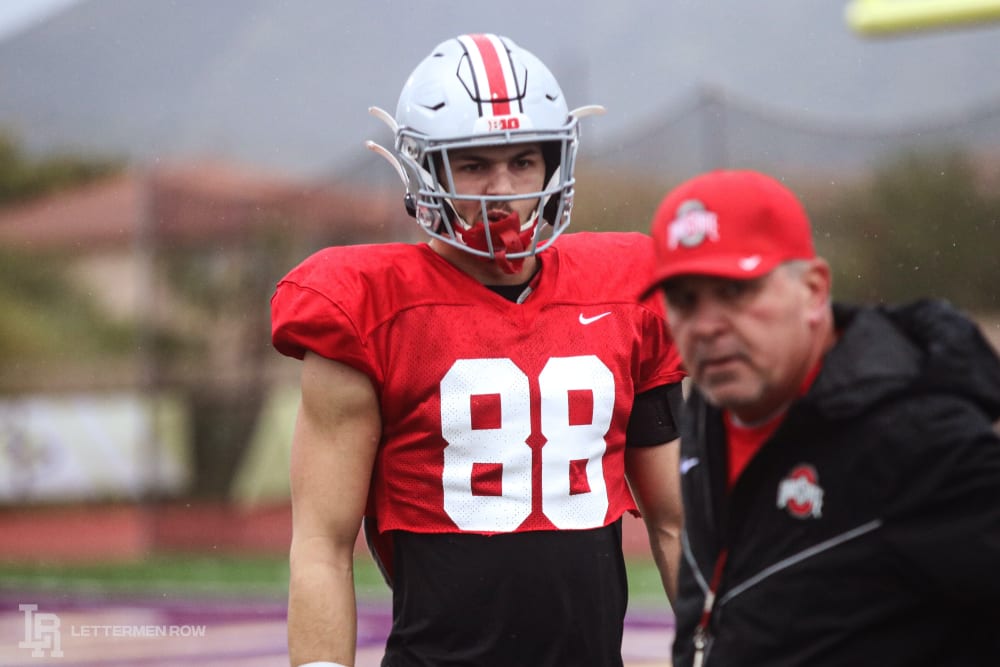 Ohio State tight end Jeremy Ruckert is looking to take the next step for the Buckeyes. (Birm/Lettermen Row)

The improvements as a blocker are impossible to ignore, and Ruckert has earned the trust of the coaching staff to be used in virtually any situation as the tight ends have become even more integral to the success of the most prolific attack in the Big Ten. No, that still doesn’t mean they are catching a lot of passes, though Ruckert did finish with 14 receptions and 4 touchdowns as a sophomore — including a jaw-dropping, one-handed snag on the way to the conference championship.

Certainly Ruckert has the physical tools to help as a target for the Buckeyes more often if that’s the direction they want to go. The first step to playing time was always going to be doing the dirty work, though, and Ruckert has proven he can handle it. Now Ohio State can build from there, and that was always part of Ruckert’s plan as well.

Why is there so much excitement around Ohio State about the potential for Jeremy Ruckert? What has he proven to the Buckeyes after two years in the program? How high is the ceiling for him at tight end? Former Ohio State teammate Rashod Berry was in the Lettermen Row film lab breaking down a few clips and answering those questions in the latest episode of BuckIQ.