Connect with us
Ohio State cornerback Jeffrey Okudah is looking to build on an impressive Rose Bowl. (Birm/Lettermen Row)

COLUMBUS — The Ohio State secondary may be trying to erase the memories from last year as it wipes the slate clean. But it is certainly worth at least reflecting on New Year’s Day as a reminder of how different 2019 could be after another postseason showcase for Jeffrey Okudah.

If anybody is going to restore the tradition in the secondary after a brief hiccup or restart a first-round draft streak that is almost certain to be snapped later this month, Okudah is the obvious pick.

He has elite cover skills. He’s a fearless competitor. There is no doubt about his athleticism, and he’s had a pair of standout performances already in his career in bowl games that would have scouts at the next level drooling.

In between that unexpected role in the Cotton Bowl as a freshman and the eye-catching outing in the Rose Bowl, though, there have been some inconsistencies for Okudah that offered a reminder he’s not a finished product. He wasn’t alone in that regard last season, of course, but with a new coach, new scheme and some extra experience, Okudah could be on the brink of a true breakout for the Buckeyes. 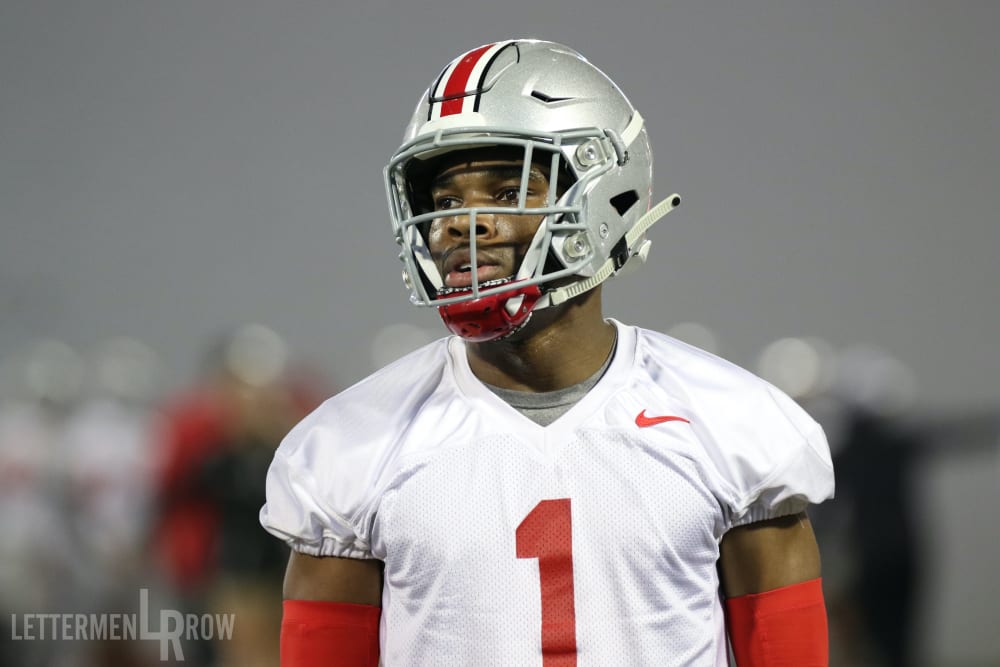 Ohio State cornerback Jeffrey Okudah has turned in a solid spring for the Buckeyes. (Birm/Lettermen Row)

“I don’t look at any struggle from last year,” Ohio State co-defensive coordinator Jeff Hafley said. “I look at what we have right now, and all I want to see is consistency and guys getting better every single day. To look back, to think back, to talk back, I’m just not going to do it. I’m going to look ahead and try to get these guys as good as we can.

The first-round potential in Okudah has been projected since the moment he stepped foot on campus, and now Hafley gets his turn to help unlock that. For the most part, the Ohio State staff has tried to avoid singling many individuals out during spring ball as it sits back and allows a revamped group of defensive assistants a chance to evaluate before making a depth chart. But the work Okudah has done during open portions of practice this spring has been as impressive as the way he flew around the field against Washington, and expectations are again soaring for him heading into his junior season.

What makes Jeffrey Okudah so dangerous in the secondary? How could tweaking the approach for defensive backs help him take the next step? Will he be preparing for the NFL Draft at this time next year? Former Ohio State and NFL defensive back Chimdi Chekwa was back in the Lettermen Row film lab breaking down what Okudah is bringing to the table for the program in the latest episode of BuckIQ.