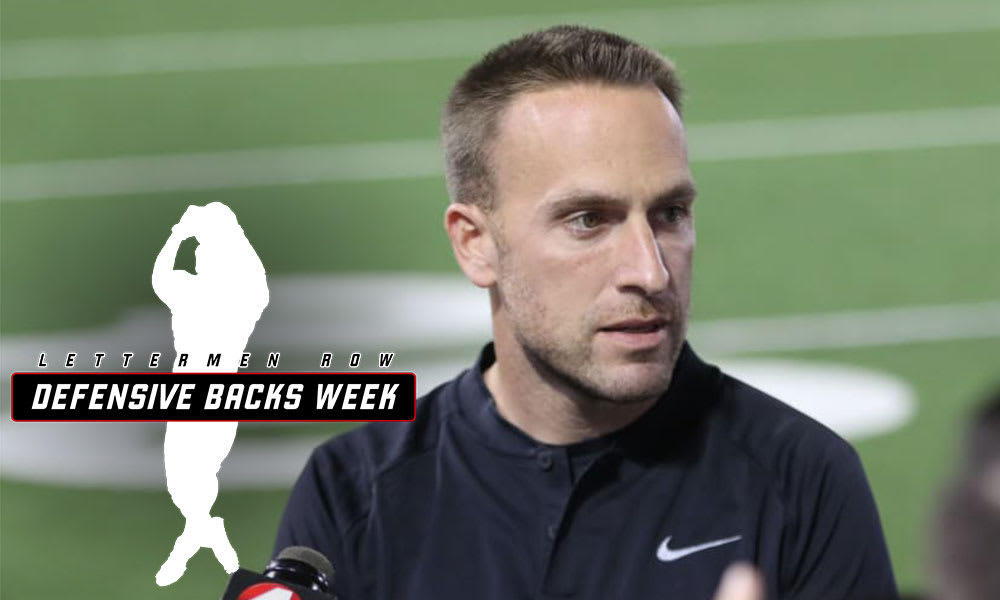 COLUMBUS — As he sat down at the round table on the turf of the Woody Hayes Athletic Center, Jeff Hafley cracked a couple jokes and made small talk with the Ohio State media pool gathered around him.

Hafley, who made the jump from NFL secondary coach to Ohio State co-defensive coordinator in January, could’ve been mistaken for a comedian before he fielded questions about his new unit, the record-breaking secondary from a season ago.

It was, of course, record breaking for all the wrong reasons. The Buckeyes defense had the worst statistical season in school history last year. But with a new defensive coordinator doubling down as a position coach in the back end, the Buckeyes are gaining confidence and expect to play loosely amid an attempted 180 turn.

Playing loosely and for fun, just the way Hafley likes.

“I wanted them to have fun,” Hafley said. “Yeah, we’ve got to work hard, we do, and they’re going to work hard. We had to get better fundamentally, and I think we did.”

Confidence and fun. Two words that Hafley uses often because he believes in them. If his secondary is playing confidently, it’ll have fun. If its playing for fun, it’ll show confidence. Gaining confidence is the key there.

Hafley and assistant secondary coach Matt Barnes are shifting a culture of playing press man-to-man coverage at nearly every snap to one that features multiple coverages and disguises. That’s not an easy task, especially when they’ve only had 15 practices to do so since they were hired. The fundamentals of that change were taught first, then they began to build on that.

As fun as Hafley can be, he also demands a lot.

“He definitely sets a clear standard,” captain safety Jordan Fuller said. “That’s what I like about him the most. He’s so smart and he always has an answer for a problem you’re having.”

Fuller will lead the secondary this season and find his name on numerous preseason watch lists. He’s had three position coaches since he arrived at Ohio State.

This time, he can sense the difference in the film room and on the field. Hafley’s bringing a new energy to the back end. The Buckeyes are learning new techniques, new views of defense and a new scheme. The results are starting to show already, before fall camp.

“It’s a new vibe,” Fuller said. “You can see a different look in some of the players eyes.”

Most of the talk this offseason has been the simplicity of the new defense. Going out there, playing football and finding the ball. Those are becoming cliche phrases inside the Ohio State program, but they carry weight.

Last season, former defensive coordinator Greg Schiano even admitted his scheme was very complex, while the new defensive staff has harped on the simplicity of the schemes they want on the field.

The simplistic view of the defense even boils down to playing time. Hafley is a strong believer in the best 11 guys playing, regardless of position. He’s not worried about who fits the system the best. He, like his co-defensive coordinator Greg Mattison, keeps everything simple.

“Whoever has the best training camp, we as coaches have to decide where to put them and we have to get them on the field,” Hafley said.

Fuller is going to start, that’s not a question. He might be an All-American candidate. Damon Arnette and Jeffrey Okudah are standing out as starters at cornerback. Brendon White appears to have the new Bullet job locked up heading into fall camp.

Hafley sees talent beyond the household names, though. He knows how well Ohio State has recruited the secondary prior to his arrival. That makes his job a lot easier, but also makes evaluating who truly is the best players that much more difficult.

So the safety spot beside Fuller that needs filled? It’s up for grabs. Quite a few names have circulated for it. Hafley’s only seen 15 practices of each guy, so he needs to see more come camp time.

“Look at the skill we have there, go out and compete,” Hafley said. “Go out and play ball.”

Demanding, standard-setting, loose, fun. Jeff Hafley is keeping it light amid a major shift in the Ohio State defense.