Jashon Cornell has played a huge role for the Buckeyes this season. (Birm/Lettermen Row)

COLUMBUS — If there’s such a thing as a secret weapon on the Ohio State defense, it’s stashed away at the vaunted three-technique spot that position coach Larry Johnson loves so much. The spotlight might not shine all that often on Jashon Cornell there inside, but what he’s giving the Buckeyes isn’t a mystery to them.

It obviously took some patient development before Cornell finally blossomed into a force, and that test was surely a two-way street with a former decorated recruit who just wanted to find a consistent spot to play and a coaching staff trying to coax all the potential out of him. And while the fifth-year senior certainly isn’t going to steal much spotlight away from Chase Young, the tough, dirty work Cornell has done on the interior has been a key factor in the turnaround of the Silver Bullets.

And if opponents down the stretch decide they want to devote even more resources to try to slow down Young on the edge, they’ll find that Cornell will be the next headache to deal with in pass protection and when trying to run the football against the Ohio State brick wall.

“I don’t know what the ceiling is [for the defensive line],” Ohio State coach Ryan Day said. “But they’re going to continue to do what they’ve done, and that’s look at the opponent that week, figure out how they’re going to attack them, play and practice with great energy, great toughness. 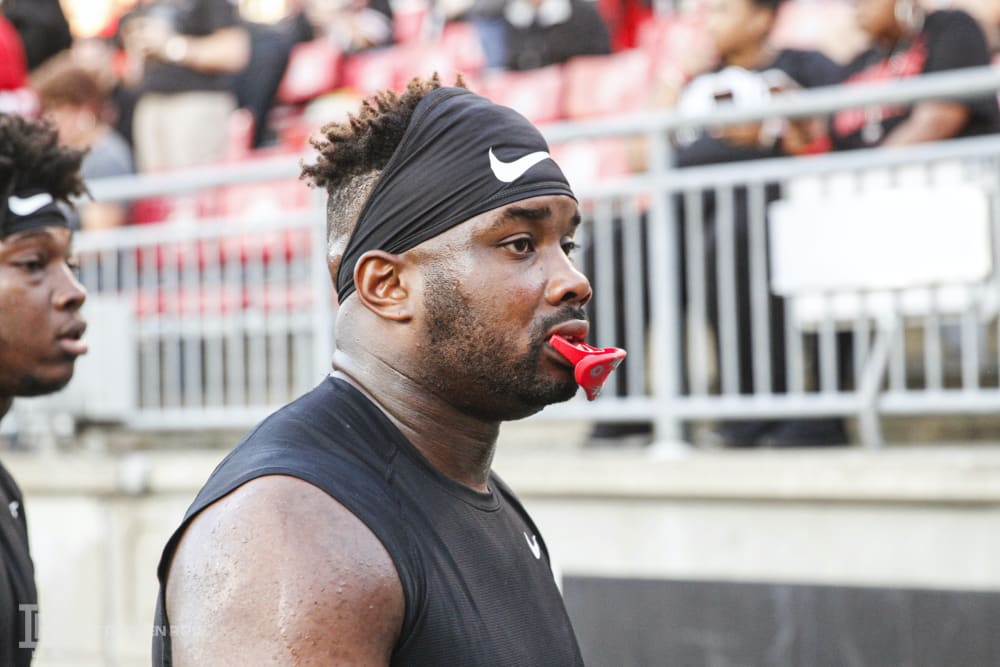 Ohio State defensive tackle Jashon Cornell is playing the best football of his career with the Buckeyes. (Birm/Lettermen Row)

“That’s the other thing that’s really good about that group is we’re pretty deep. We’ve had to play depth because we had a few guys dinged up throughout the season, and that’s still the tip of the spear of the defense. If we can win the line of scrimmage, we’ve got a chance against anybody. I think when you combine their ability to stop the run and the pass rush, that makes them pretty versatile.”

Young is undoubtedly the poster boy in that department, but Cornell’s positional flexibility is right up there as one of the prime examples of what Ohio State wants from the Rushmen unit. He’s big and strong enough to hold up against the rush, and he’s not afraid to stick his nose in the pile to make a play in the backfield. But as a former defensive end at times for the Buckeyes, he’s also got the pass-rushing moves to make life miserable for guards who have to try to block him in one-on-one battles.

The stat line might appear relatively modest for Cornell heading into the final month of the season with 5 tackles for loss, 2.5 sacks and a forced fumble. But among the guys Ohio State will rely on most during the championship push, Cornell has built himself into somebody the program can absolutely count on to get the job done.

What has allowed Jashon Cornell to close his career at such a high level? Where can the versatile defensive tackle still find more ways to contribute down the stretch? Why does Ohio State love the three-technique position so much? Former Buckeyes defensive tackle Tracy Sprinkle was back in the Lettermen Row film lab breaking down Cornell’s play so far and trying to answer those questions on the latest episode of BuckIQ.

Confidence in Chris Chugunov clear when he comes off Buckeyes bench
How rest of defensive line feeds off, fuels Chase Young dominance