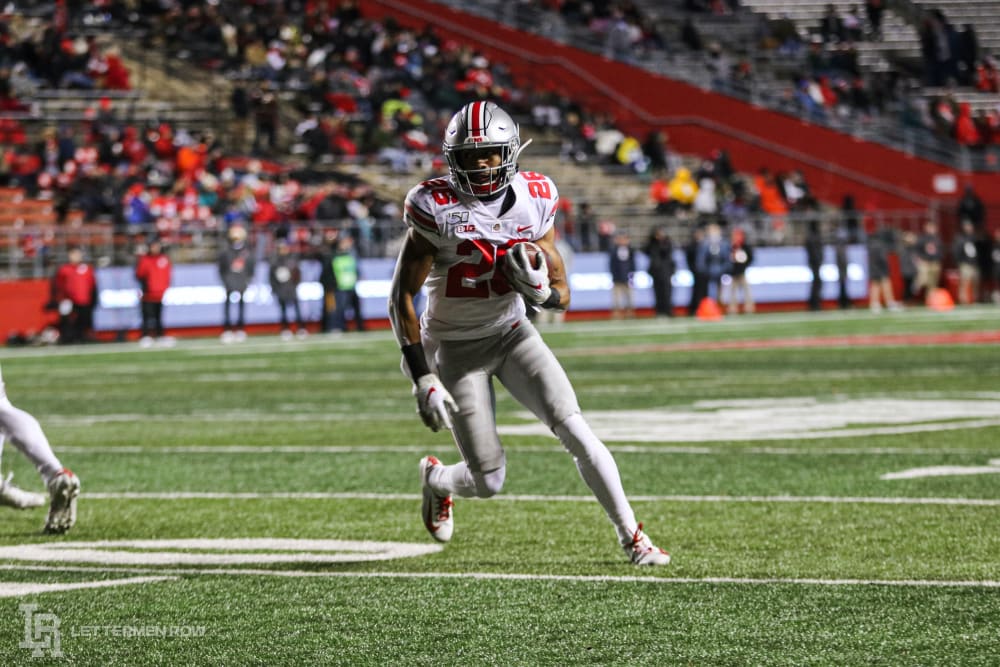 Ohio State had one of the best seasons in program history last year, and it came with the help of some young players. Now as the younger Buckeyes enter another year for the Buckeyes, they may be expected to take on expanded roles. Lettermen Row is breaking down a play from each key inexperienced Buckeye and how it can help provide a glimpse into each of their futures. Next up: Jaelen Gill will attempt to finally carve out a role in the Ohio State offense.

COLUMBUS — Jaelen Gill has always been booming with potential for Ohio State.

The redshirt sophomore will now have to start living up to that and matching the lofty expectations he came to Ohio State with before it’s too late. Gill, a top-30 prospect in the 2018 recruiting class, can be cut some slack considering his move to H-back and wide receiver after playing running back at Westerville South near Columbus.

But as he enters his third season in the program, he needs to take the next step in his development, something that will come with controllable factors, like more consistent practice habits — and also uncontrollable issues like injuries.

Maybe everything will click for Gill at this point in his career. With the loss of all-time receptions leader K.J. hill, there’s plenty of production to replace at H-back. Not every Buckeyes playmaker develops the same, and Gill still has plenty of time to figure out how to maximize his potential that certainly is there. He showed a small sample of it in the Buckeyes blowout win over Rutgers in November.

“I thought Jaelen had one of his better weeks of practice [before the Rutgers game],” Ohio State coach Ryan Day said in November. “Then, lo and behold, he makes a big run. There you go. That’s typically how it works.

Though small, those opportunities show what Gill is capable of with the ball in his hands. All six catches for 51 yards were important in his development last season. If Gill can consistently make jaw-dropping plays in practice later this year like what he did late in the Rutgers game, he could find himself in a favorable situation for the Buckeyes.

Jaelen Gill can be a playmaker for Ohio State.

The play: Early in the fourth quarter of a 49-14 game against the Scarlet Knights, backup quarterback Chris Chugunov threw a simple screen pass to Gill, who made the rest happen himself.

Gill broke tackles, spun away from defenders and rumbled his way into the end zone for a 32-yard score, the first of his career. It’s easy to see why Gill has so many still waiting on him to break out. He’s athletic and has a quick burst to get upfield after the catch. He’s slippery enough to dodge defenders and make a play down the field. And at least on the catch and run against Rutgers, he’s strong enough to leave defenders behind him after missed tackles.

That was just one play, and Gill will have to find a way to crack into a loaded wide receiver room that features Chris Olave and Garrett Wilson, but also just added four talented freshman pass-catchers.

If Jaelen Gill shows any more highlights like he did in November, he might force the coaching staff to put him on the field and make plays for the explosive Buckeyes offense.

But that starts with turning potential into consistency.