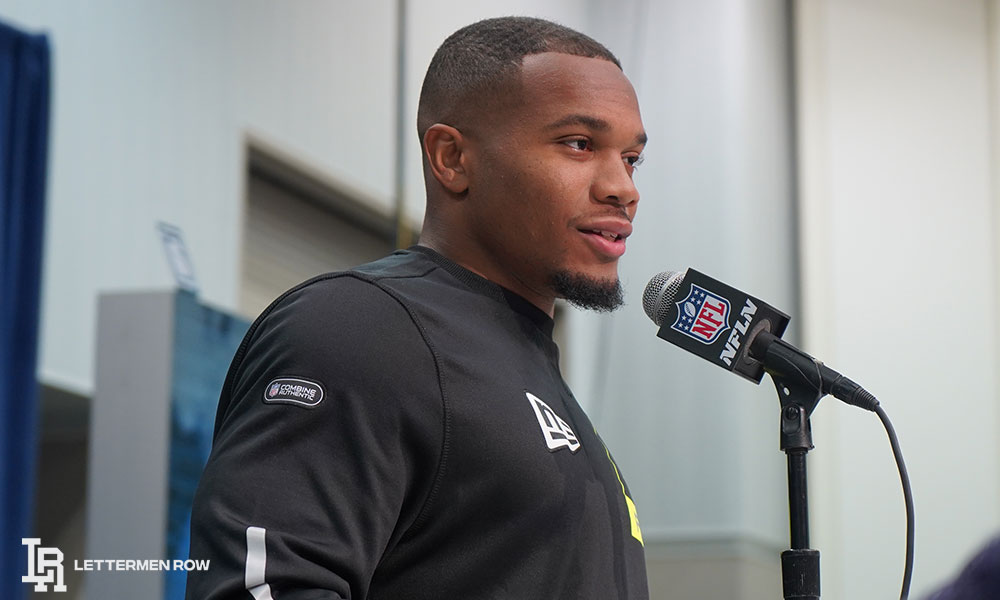 Ohio State product J.K. Dobbins is one of the best backs at the NFL Combine. (Spencer Holbrook/Lettermen Row)

INDIANAPOLIS — J.K. Dobbins thinks he’s a game-changer at running back.

He’s fairly certain that whichever of the 32 NFL teams that chooses him in April’s draft will be getting the best back in the talented class of ball-carriers. Dobbins is so confident in his ability to shift a game that when he was asked about his ankle injury that hampered him in the second half of the Buckeyes crushing season-ending loss to Clemson in the Fiesta Bowl, he said exactly what was on his mind.

“We definitely win that game,” Dobbins said about the Buckeyes if he wouldn’t have gotten hurt.

Not entirely over the way things ended at Ohio State, Dobbins still thinks about what could have been if he would have stayed healthy for the full Clemson game. He might be a national champion.

For now, he’s trying to focus on becoming a rare first-round pick at running back. Running backs in today’s NFL are largely undervalued. They don’t often fly off the board in the first round of the draft. But Dobbins certainly feels like he’s different than most backs.

“It’s definitely important [to be a first round pick],” Dobbins said. “If I was to go in the first round, I think it will show that the value of running backs isn’t really down. We do a lot of things on the field and we help our teams win. You can see it with the Titans and Chefs. The Chiefs closed out the Super Bowl with running plays.”

Dobbins has the talent of a high-draft selection. But he will also need to answer some questions, and they’re somewhat based off that lone game against Clemson, when he dropped two would-be touchdown catches in the first half. Just as the explosive runs in that game were crucial, so were the drops. Dobbins will have to prove that his hands are better than what he showed in December.

“A lot of people try to say that I can’t catch because I took my eyes off the screen pass in the playoff game,” he said. “But I had more than 70 catches, so I think I can catch pretty good.”

Dobbins will never be afraid to prove anyone wrong. He had to prove himself as a freshman at Ohio State, when he burst onto the scene with an incredible first act as a freshman. And again as a junior.

When doubts creeped in about what he could do as a back, the chip on Dobbins’ shoulder grew even larger, and he proved he belonged among the nation’s elite backs with his record-setting season that catapulted him to the top of the running back boards.

“I think I have tremendous vision,” Dobbins said. “I can do it all. I can be explosive. I can grind it out. And I’m also a leader. I think I make everyone around me play better.”

Dobbins still doesn’t fully feel 100 percent from the ankle injury. It has slowed him down a little during training for the NFL Combine, when teams are busy making sense of what he could bring to their offense. It might keep him out of on-field drills.

But that might not matter. Durability shouldn’t even be a question for the dominant back from La Grange, Texas, who had 2,003 yards rushing last season. He has shown he can play through entire seasons without being injured. Until the last game, one of the most important in his college career. The one that cost him a chance to play for a national title.

“It definitely affected me a lot,” he said. “It was a significant injury. It was a very high ankle sprain. It was definitely tough to even go back and battle through it. It hurt a lot, definitely. But I just wanted to win the game for my team and tried to get to the national championship.”

While he’s still coping with that loss to Clemson — the game-changing injury that held him back — Dobbins can begin to put that behind him and shift to the thought of becoming a game-changing back at the next level.

“I always feel I have something to prove,” he said. “Even when I ran for 2,000 yards, I feel like I could have proved a little more.”