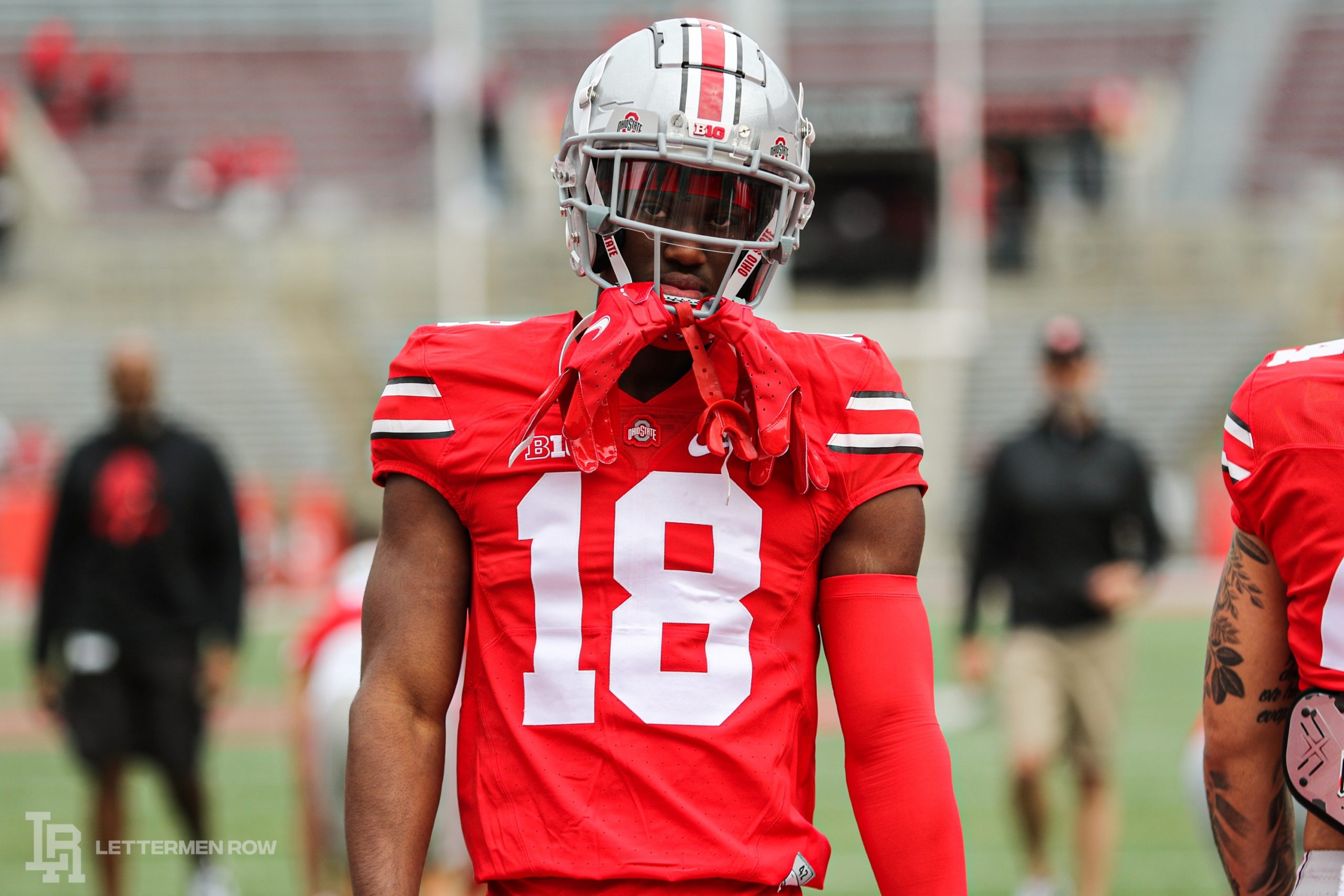 Ohio State wide receiver Marvin Harrison had one of the best springs for the Buckeyes. (Birm/Lettermen Row)

The speculation, debate and conversations about Ohio State never end, and Lettermen Row is always ready to dive into the discussions. All week long, senior writer Austin Ward will field topics about the Buckeyes submitted by readers and break down anything that’s on the minds of the Best Damn Fans in the Land. Have a question that needs to be tackled, like the one today about Ohio State and the strong spring from Marvin Harrison Jr.? Send it in right here — and check back daily for the answers.

Maybe only at Ohio State can a four-star wide receiver with Hall of Fame genetics be overlooked heading into spring camp.

But with the Buckeyes already loaded with talent at the position and most of the spotlight in a loaded recruiting class going elsewhere, Marvin Harrison Jr. reported to campus with relatively little buzz. He certainly changed the volume in a hurry, though.

Perhaps nobody delivered a more impressive set of 15 workouts in March and April than the freshman wideout, who was a fixture in the end zone during all the open-viewing periods in camp and capped it with another touchdown in the spring game last weekend. Granted, the race to earn any sort of unofficial Spring MVP is fierce and has numerous deserving candidates. But from the shape he showed up in during the winter, the work ethic he displayed and the undeniable impact he was having in scrimmage situations, few people made more of the camp from start to finish than Harrison. 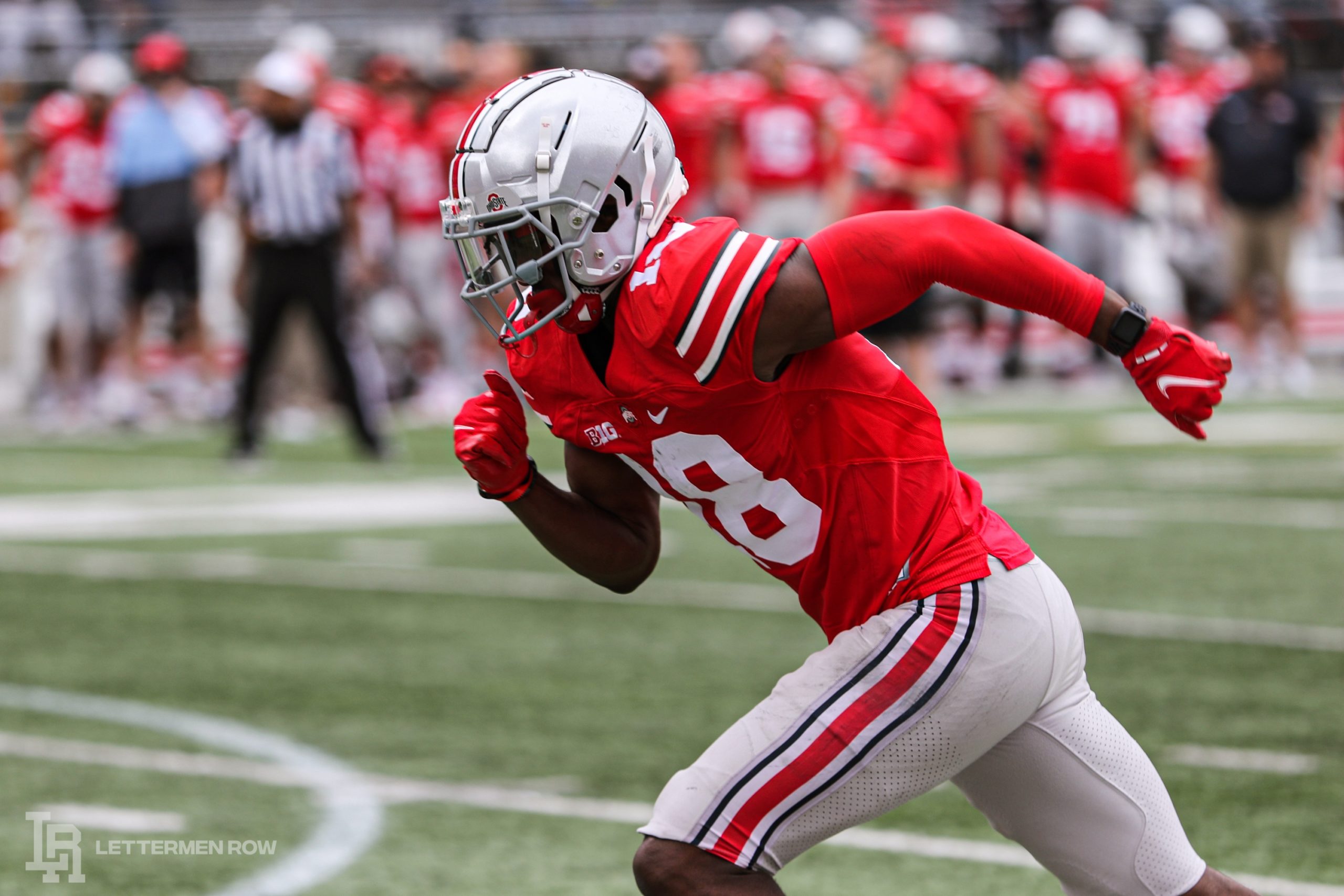 Ohio State still doesn’t necessarily need Harrison to bolster the rotation at wide receiver considering the elite veterans on hand to lead the unit. But it’s hard now to envision a scenario where he’s not helping the Buckeyes right away, and maybe the bloodlines should have been the tip-off there all along.

“Marvin Harrison is real,” Ohio State star Chris Olave said last week. “I mean, he’s a route-runner, technician, he’s a deep threat, all of that. He’s a real good receiver, and I hope you guys will get to see that [in the spring game].

“I’m really proud of those young guys and how they keep developing. They work so hard and keep their heads down, don’t really say much. But those are the guys you want, and they’re going to be really good in the future.”

Harrison, of course, isn’t even the only freshman receiver turning heads, with Emeka Egbuka also getting his black stripe removed during camp and Jayden Ballard now squarely in position as an under-the-radar threat generating excitement inside the Woody Hayes Athletic Center.

Outside of that, Jack Sawyer stamped his flag as an early contributor, Cameron Martinez made noticeable strides heading into his second year in the Ohio State secondary and Craig Young looks poised to emerge as a do-it-all defender in the Bullet role.

All of those young Buckeyes are riding some momentum now into the summer offseason. But Marvin Harrison proved he was ready to help from Day One, and his spring camp appears to have him well on his way to making a mark in the fall.