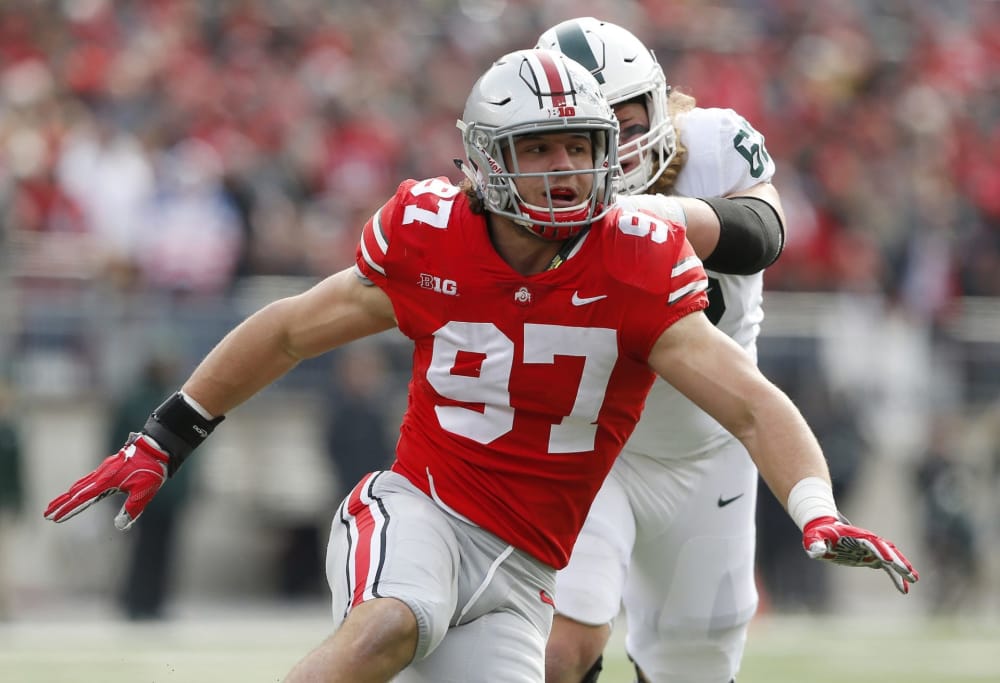 Nick Bosa has the ability to make a run at Heisman history. (Luke Campbell/USA TODAY Sports)

There is obviously a reason the odds are so long against Ohio State superstar Nick Bosa winning the Heisman Trophy.

It’s no secret that the award is famously hard to win for pure defensive players, and it certainly doesn’t help Bosa’s case that he has two teammates on the other side of the ball who both appear capable of winning the award as well. So, sure, it might be a sucker bet to take Bosa and the 66-to-1 odds that he’s currently receiving courtesy of Bovada.

But when it comes to the Buckeyes and the bid to end the drought that is now a couple years past a decade since Troy Smith’s win in 2006, why not Bosa? Throw up a shrug with me and check out four reasons why it’s not as crazy as it sounds.

Nick Bosa has the talent, team to pull it off

The rule isn’t hard and fast, but the Heisman does tend to find its way to a standout performer on one of the nation’s best teams. And with so much firepower returning this season, Ohio State is once again on the short list of contenders to win the College Football Playoff, which checks one box for Bosa right off the bat. The statistical part of the deal is up to him, but a player already considered one of the top options to be the No. 1 overall pick in the NFL Draft this spring is probably going to be in position to put up the kind of numbers needed to make history. It remains hard to fathom how Ndamukong Suh didn’t win the trophy when he was a one-man wrecking ball for Nebraska in 2009 with 24 tackles for loss, 12 sacks, 26 quarterback hurries, 10 pass breakups, an interception and three blocked kicks. That’s certainly a high bar for Bosa to clear after finishing with 16 tackles for loss and 8.5 sacks last season, but his production per snap in a four-man rotation was ridiculous — and it’s fair to assume that workload is going up this fall. 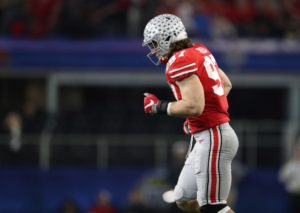 Nick Bosa was the Big Ten Defensive Lineman of the Year as a sophomore. (Matthew Emmons/USA TODAY Sports)

Again, it is certainly possible to emerge from nowhere to win the Heisman, and voters do seem to be approaching their ballots with more of an open mind recently. But without a doubt, it helps to come into a season with some support and legitimacy to a candidacy before a game has even been played. With Bosa already generating feverish draft buzz, coming off a year where he was the Big Ten Defensive Lineman of the Year and following in the footsteps of his brother Joey, he already qualifies as a household name in the college football world. That has real value for a Heisman hopeful, particularly if another discussion about the possibility of a true defensive player getting a shot to win the trophy gains traction again.

Ohio State’s offensive candidates might cancel each other out

In some ways, it might wind up hurting Bosa’s bid that Ohio State has two other candidates capable of making a run for the Heisman in running back J.K. Dobbins (15:1) and quarterback Dwayne Haskins (22:1). There’s certainly the possibility that if all three are having award-worthy seasons that they would split the vote or have difficulty standing out as the top option just among Buckeyes. But if Dobbins and Haskins are both helping each other put up eye-popping statistics for a prolific Ohio State attack, that might actually work in Nick Bosa’s favor with only the offensive guys canceling each other out and more attention being paid to the defensive dominance.

What’s better than pulling for history to be made — especially if it comes with a better payout? Even if it’s not Nick Bosa this season, it feels way overdue for a defensive player to hoist that Heisman. Suh should have been the guy to break through for that side of the ball, and it’s arguable that when he came up short, the trophy itself lost a little luster. The stiff-arm statue is supposed to go to the most outstanding player in the country, and it seems far-fetched that guy would almost always be lined up on the offensive side of the ball. Eventually a defender is going to turn the tide. Maybe it will be one who will shrug just before putting his hands on the hardware.