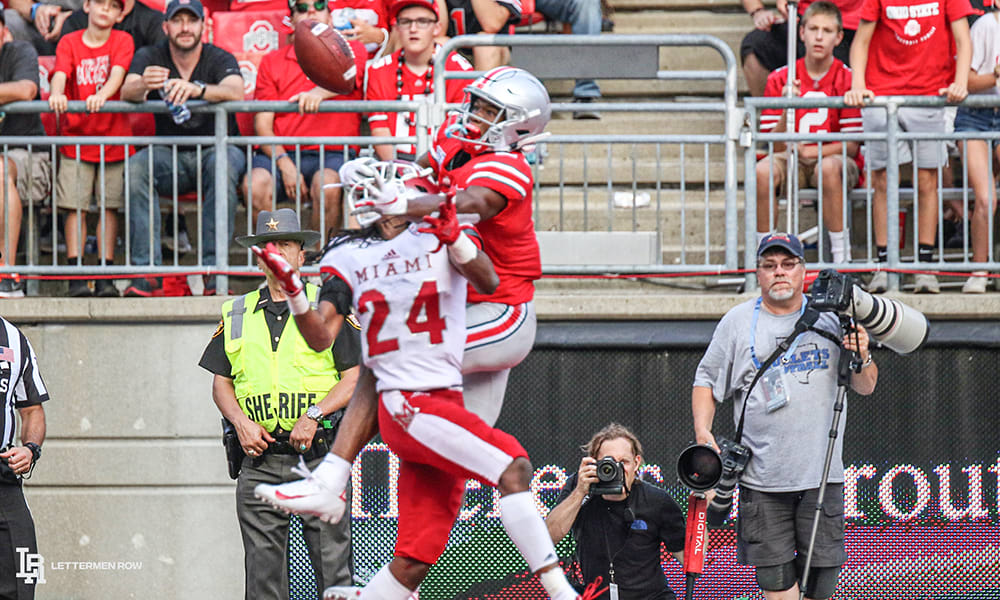 COLUMBUS — If Garrett Wilson can still do better than that, maybe Ohio State should start charging admission to watch practice.

One after another, Buckeyes kept claiming that they’ve seen better highlights from the breakout freshman than the one he added to his growing reel on Saturday in the Horseshoe. And if that’s true, it’s pretty crazy to think what those shows at the Woody Hayes Athletic Center must look like.

Does Wilson put on a blindfold? Is he only allowed to practice with one hand? Does Ohio State throw five scout-team defenders at him to see if Wilson can still come up with the football?

Maybe that sounds like too much hyperbole for a wide receiver who has only played four games with the Buckeyes. But counting the glimpse at his athleticism in the spring game, the soaring snag he made for his first career touchdown against Cincinnati and the circus grab he made in the blowout win over Miami (Ohio), that’s already three jaw-dropping catches on his resumé — when the world is allowed to watch.

“Garrett, that was a good catch,” Ohio State quarterback Justin Fields said. “But he’s definitely had better catches in practice. That wasn’t surprising to see.” 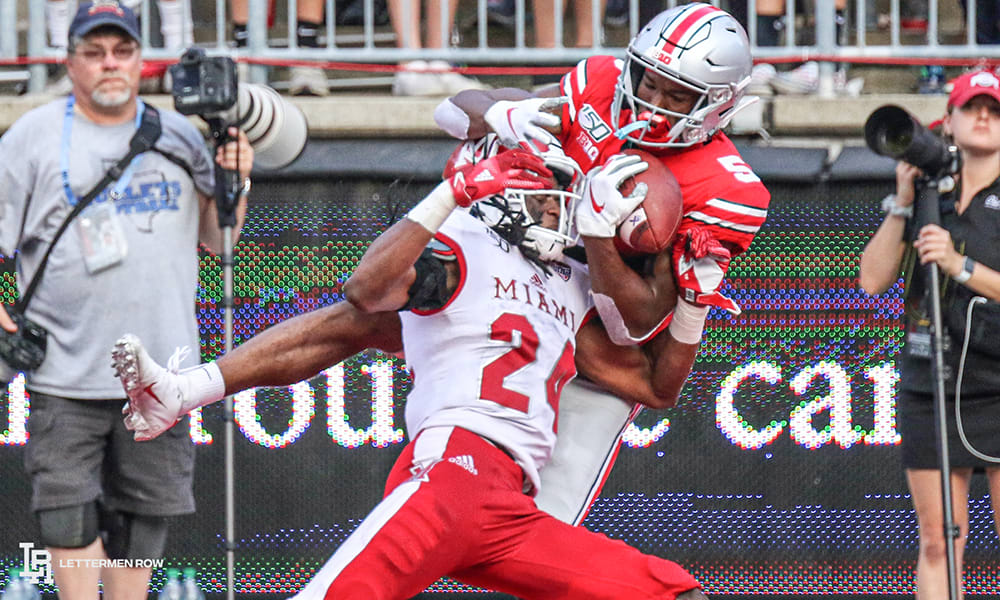 If the Buckeyes are already numb to the kind of play that requires Wilson to adjust to a deep throw down the sideline, leap into the air, reach around a defender to find the football, absorb contact and then juggle the football while hitting the turf, it’s hard to imagine what else he might be capable of doing.

Ohio State wide receivers coach Brian Hartline has been quick to temper some of the hype around Wilson dating back to his early enrollment and impressive spring camp. And it’s clear that Wilson still has room to grow to become the kind of all-around weapon that the Buckeyes envision.

But the elite potential is impossible to ignore. And it’s already clear that Wilson is capable of helping push the passing game to a higher level with plays like the 38-yard bomb from Chris Chugunov. 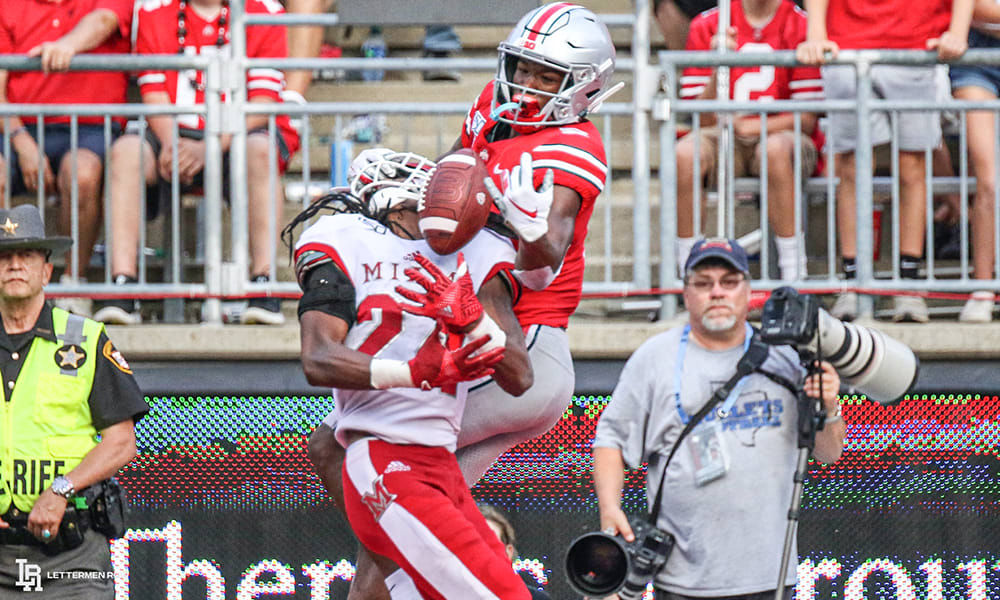 “It was a one-on-one go ball that Chris kind of underthrew a little bit, but he gave him a chance by putting a lot of air on it,” Ohio State coach Ryan Day said. “And then it was just unbelievable talent, going over the top, making — getting his hands on it over the top of the corner, but also somehow making some sort of circus catch.

“That is one of the things we’ve seen in practice. But that one was pretty unreal.”

The Buckeyes might be getting used to seeing that from Wilson, but even he appeared to have a hard time believing what happened in the south end zone against the RedHawks.

The good-natured freshman asked for a second opinion on the tunnel on the way to the Ohio State locker room after the game, smiling as he got confirmation that the replay review that confirmed his grab was correct. 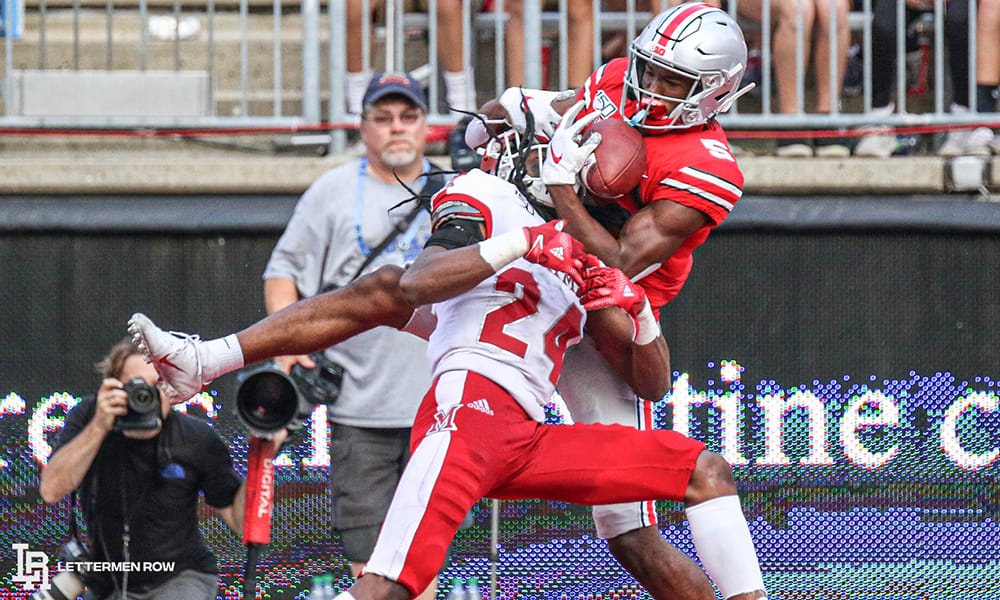 “Did it hit the ground?” Wilson said. “I forgot for a second they could review it, and I was freaking out.”

There was no need for him to worry.

But there will be plenty more freaking out about what he’s capable of on the football, especially if Wilson has even more tricks left up his sleeve.

“I’ve seen him go make a play,” Ohio State wide receiver K.J. Hill said. “We knew Garrett could do that, even just watching highlights of him [in high school]. Then when he came into camp, he was making the same kind of plays.

“When people see that, our whole sideline knew he caught it just because he’s got great hands, great ball skills and he can jump out of the gym. I know he can go up and get it.”

Now the bar is only going to get higher for Garrett Wilson. But apparently what he’s doing in the game is still lagging behind whatever it is he’s doing in practices that must be a secret gold mine of highlights from a star in the making.