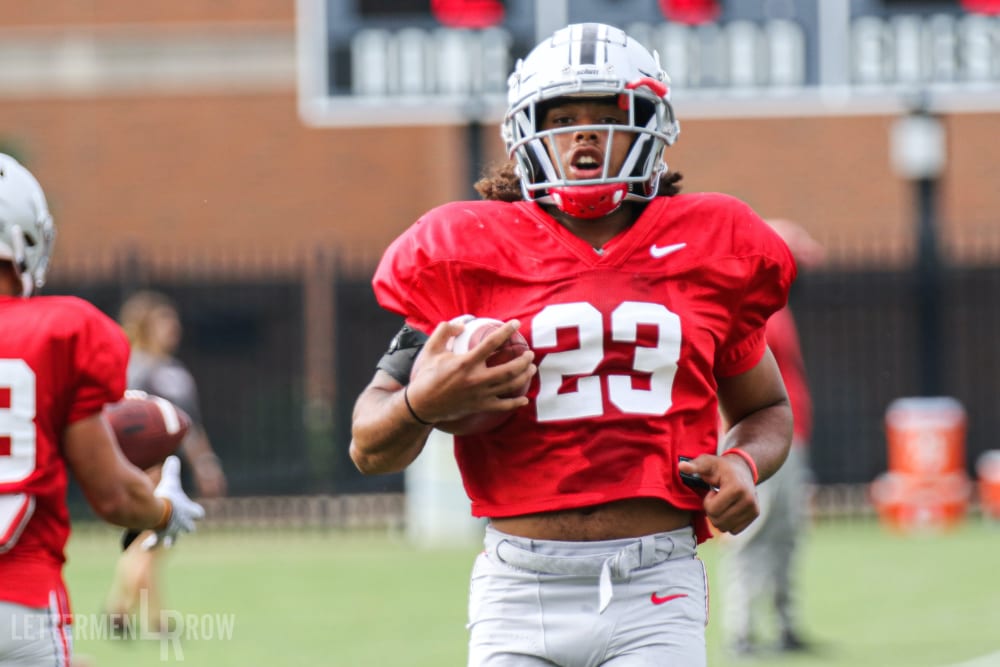 Ohio State running back Marcus Crowley is pushing for a complementary role with the Buckeyes. (Birm/Lettermen Row)

COLUMBUS — The training-camp grind at Ohio State isn’t over, but the program has put roughly half of its work in the rearview mirror.

The season opener is finally starting to creep over the horizon, and it’s about time for the Buckeyes to start making some tough decisions and turn its attention to gearing up for a game.

One scrimmage is already complete. The Buckeyes have nearly two full weeks of practices in the bag. And before Ohio State knows it, classes will be underway, the team will be checked out of their hotel near campus and the full attention will be on Florida Atlantic.

“Every day you see things that are pretty amazing,” Buckeyes coach Ryan Day said. “We have some really good athletes out there and guys are competing, and any time that happens, sometimes you see it live and it kind of [wows] you — you recognize it. Sometimes you don’t catch it until you watch it on film and you see it three or four times and you recognize what a nice play it was.

“So, it’s been good. I think the guys are competing out there.”

How are those battles going to be resolved in the coming days? What positions remain up for grabs for Ohio State? How high is the ceiling for the back-to-back Big Ten champs? With roughly half of training camp complete, here are five looming questions Lettermen Row still has for the Buckeyes. 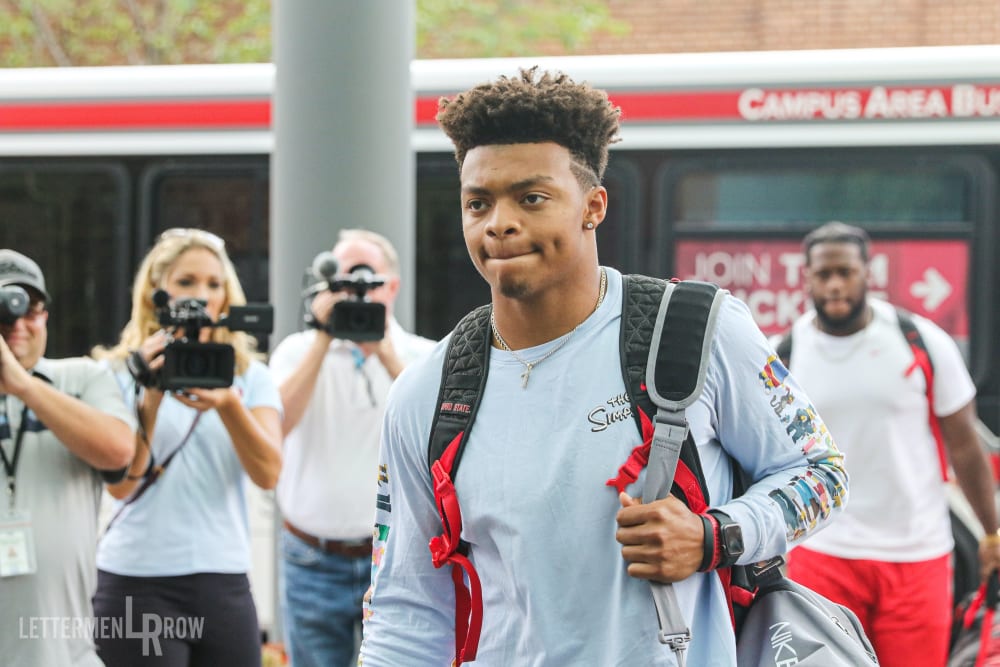 When will Justin Fields be named the starter?

The move is inevitable at some point, even if Ohio State still doesn’t believe Justin Fields has done enough so far on the practice field to be named the starting quarterback. Ryan Day wanted competition for the top spot, wanted Fields to feel some pressure to perform and wanted Gunnar Hoak to have a fair shot at the job — and there’s nothing wrong with that approach at all.

But it’s been clear for a while now that Fields will be the guy for the Buckeyes. And while Day always indicated that he could wait a couple weeks into August before naming a depth chart, at some point it’s at least going to seem like Ohio State has a problem at the most important position on the field if the full support isn’t thrown behind one guy. Maybe that point hasn’t arrived yet, maybe Hoak deserves more credit for keeping it close. Sooner or later, though, the Buckeyes are going to need to confirm the decision that everybody who has seen Fields fully expects to be a formality.

There is no reason whatsoever to question the tightness of the race at right tackle, and that has perhaps opened up an option that is rarely considered as an eventual solution on the offensive line. With Branden Bowen healthy, motivated and in tremendous shape, he’s a realistic candidate to be a starter on the edge for the Buckeyes. Meanwhile, former five-star Nicholas Petit-Frere is living up to his hype now heading into his second season with the program, and he’s building a strong case for that role as well.

So, is Ohio State serious about playing both of them? It certainly sounds like it, although it still seems unlikely that it would do that for the entire season given how crucial chemistry usually is for offensive linemen. Maybe if there is no separation at the end of the month, the Buckeyes might simply extend the competition into the opener or perhaps even the first couple weeks of the season before settling on one guy. But at this point, Ohio State is content to keep letting them take turns on the practice field since it hasn’t seen any drop-off.

Who is the backup tailback for Buckeyes?

The challenge was made publicly, and so far Ohio State hasn’t seen anybody definitively step up and answer the call. There’s no question that J.K. Dobbins will lead the effort in the backfield for the Buckeyes, and he’s going to have easily the heaviest workload of his career this season.

But Day still needs a secondary option to both backup and complement Dobbins to protect him from overuse, and at this point the search is still continuing. That might be due to the undisclosed injury that has limited Master Teague during the early portion of camp, because the redshirt freshman entered camp as the odds-on favorite. But either way, the door has been cracked for Marcus Crowley, Demario McCall and Steele Chambers to make a push.

Look out for Crowley, who made the most of his early enrollment with a solid spring that offered a few hints that Ohio State might have found an under-rated gem down in Florida. If he can handle some of the dirty work picking up blitzes, there’s not much doubt that he can handle the rest of the responsibilities with the football in his hands. 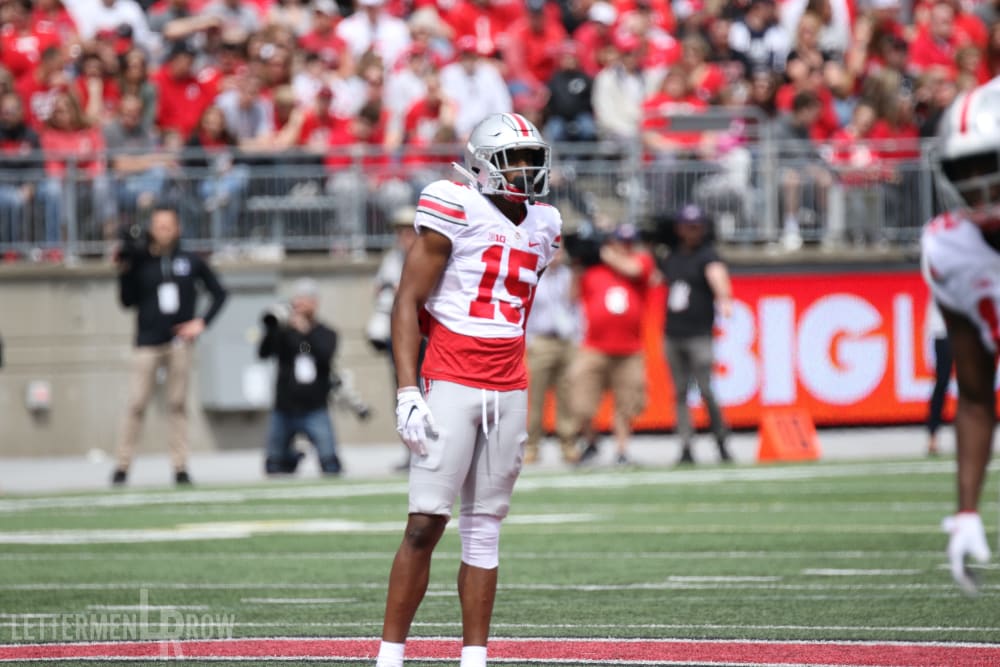 Where does Josh Proctor fit into Ohio State plans?

The buzz was already continuing to build for the second-year safety from Oklahoma, and then Ryan Day turned up the volume even higher by pointing out the two interceptions Josh Proctor made in a closed practice. There are still a handful of unknowns about the Ohio State defense this season, but it’s becoming increasingly clear that any plans need to include Proctor in the secondary.

That can get complicated at times depending on how much the Buckeyes use the Bullet position, how the rotation among defensive backs will work thanks to the versatility of a guy like Shaun Wade and exactly how many different personnel groups co-coordinators Greg Mattison and Jeff Hafley will use. But Proctor’s athleticism is undeniable, and he has the potential to be a star for the Buckeyes.

Do the Buckeyes have championship DNA?

The answer about Ohio State’s potential won’t really come until actual games are played. But when it comes to pure talent, there might not be a more impressive collection anywhere in the country than the one working out at the Woody Hayes Athletic Center.

The defensive line is absurdly loaded. The linebackers and defensive backs are poised for a bounce-back campaign. The offense has one of the nation’s best tailbacks, another deep group of wide receivers, a star-studded offensive line — and the highest-rated recruit in the history of the program at quarterback. On paper, the Buckeyes have everything any program could possibly want.

The true test is how the Buckeyes handle adversity, how impactful the leadership is from the captains and how the chemistry in the locker room develops. Based on all the feel-good videos Ohio State is releasing of dance parties in the team room, that last part doesn’t look like it will be a problem at all.