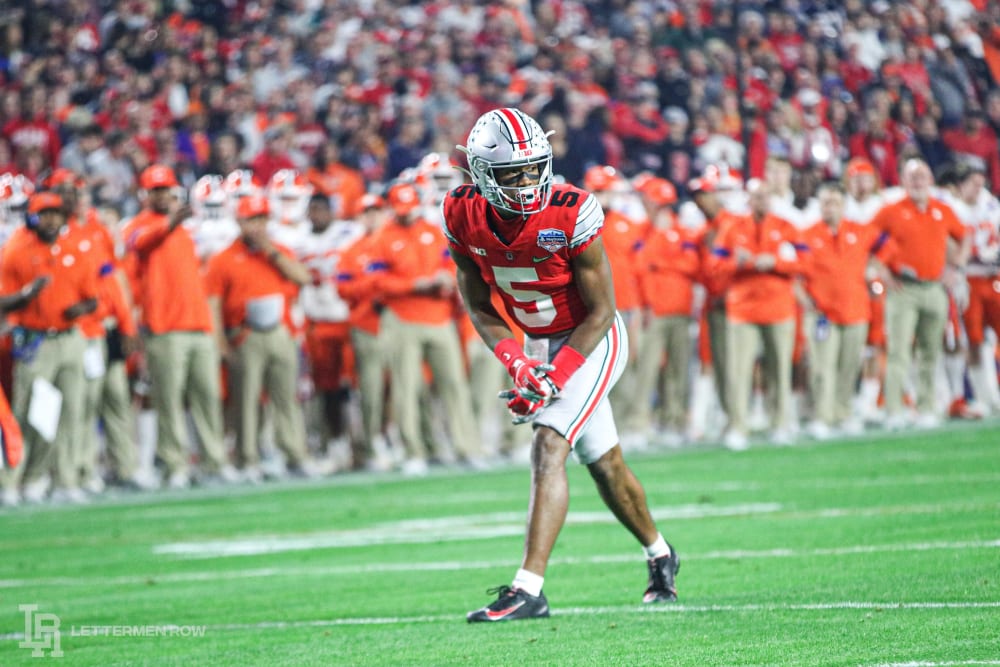 Ohio State wide receiver Garrett Wilson has a chance to become a go-to receiver for the Buckeyes. (Birm/Lettermen Row)

It would have much rather brought in the New Year with a couple weeks of practices and hoisted a big trophy in New Orleans to claim a national title. But Clemson had other plans, and the Buckeyes must officially turn their focus to the offseason, already beginning the prep for another College Football Playoff run in the upcoming new decade.

This offseason will be critical; senior wide receivers, offensive linemen, defensive linemen, a linebacker and members of the secondary will depart, not by choice. Then there are plenty of Buckeyes with decisions to make. Some should have easy decisions to make — Chase Young and Jeff Okudah — but some will be forced to decide if the NFL is the right move for them at this point in their career, or if they want to run it back one final time and try bringing a national title back to Columbus.

College football is a sport of attrition, but Ohio State recruits at the highest level in the sport. With one of the deepest rosters in the country, the Buckeyes expect to reload every season, no matter how many All-Americans they lose to the NFL. At the same time, recruiting stars mean nothing once the signees show up to the Woody Hayes Athletic Center.

So to kick off a huge offseason for Ryan Day and Ohio State, Lettermen Row is looking at five Buckeyes who face a critical next few months leading into next season. 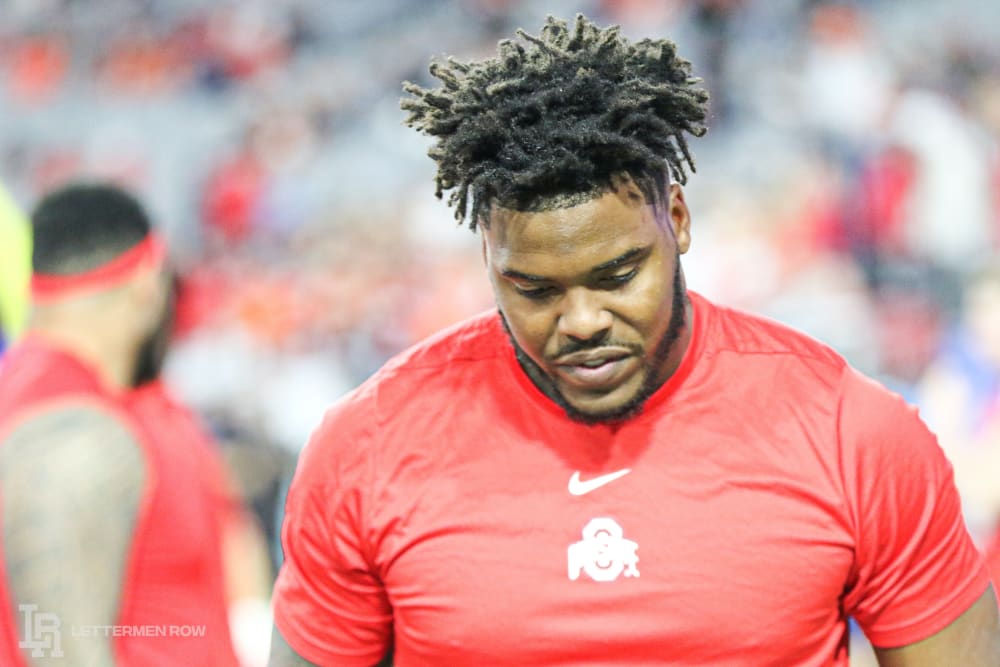 Tyreke Smith entered the season as a breakout candidate, but injuries stood in the way of his dreams for a monster season. For the most part, he platooned with Zach Harrison and Tyler Friday along the Ohio State defensive line. As Chase Young is likely to leave for the NFL Draft, Smith’s role at defensive end can only expand, especially if he can find a way to stay healthy for an entire season. Senior captain Jonathon Cooper took a medical redshirt this year and will be back. Harrison showed flashes during his freshman season and will only continue to grow under Larry Johnson. If Smith can take the next step in his development, the defensive line should be scary for the Buckeyes again next season.

The Buckeyes received huge news this week in the trenches when center Josh Myers and guard Wyatt Davis both told Lettermen Row they plan to skip this year’s NFL Draft and return to Ohio State next season. Thayer Munford also hinted that he’ll return for one more year, giving the Buckeyes stability on the offensive line that was a finalist for the Joe Moore Award. Still, Branden Bowen and Jonah Jackson finished their Ohio State careers in the Fiesta Bowl, leaving two holes to fill up front. Petit-Frere has practiced at right tackle, Bowen’s spot, although the only start of his career was at left tackle. If he can take another step forward in his development and keep adding weight onto his frame, he’s the leading candidate to take over at right tackle, a key position in keeping Justin Fields upright.

There’s a decent chance the entire Ohio State secondary, one of the best units in the country, will depart for the NFL. That’ll be known when Shaun Wade announces whether he’ll return to school or not. Damon Arnette boosted his draft stock during his senior year, Jordan Fuller will graduate and Jeff Okudah will likely be a top-10 pick in the NFL Draft. So Cameron Brown might have the most important offseason of any Ohio State player on the roster. Brown was the first cornerback to come onto the field when Arnette or Okudah needed a break or received medical attention, and he wasn’t a liability when in the game. But if the Buckeyes want to be back in the College Football Playoff again next season, Brown’s development into a shut-down cornerback will be massive for the future of the defense. 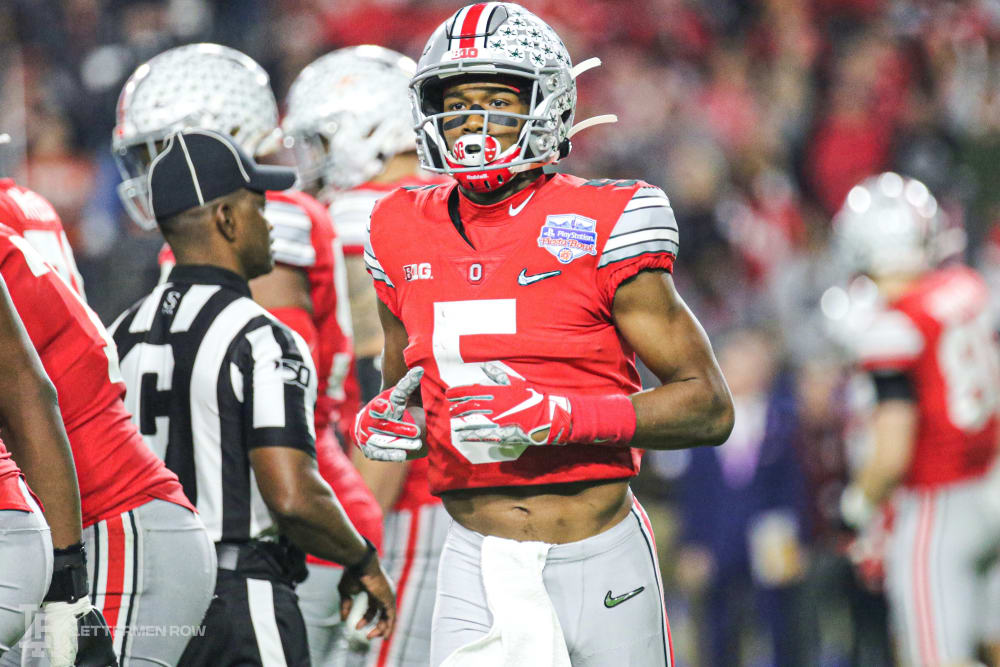 It was easy to see why Garrett Wilson got so much playing time — and so many targets — during his freshman campaign. It became even more evident in the first quarter against Clemson, when Wilson leaped over a Clemson defender for a huge gain that set up the first points for the Buckeyes. Wilson is going to be a superstar for the Ohio State offense, and his role will expand as one of Justin Fields’ top options in the passing game alongside Chris Olave. If Wilson can develop chemistry with Fields for another offseason and get better in the weight room, he has a chance to be great.

No linebacker had a better breakout season than Baron Browning, who showed he can move from sideline to sideline, stuff the run and occasionally rush the passer. His pass-rush skills have gotten better each week after working with defensive line coach Larry Johnson, making him a versatile weapon in the Silver Bullets defense. The loss of Malik Harrison leaves a big spot to fill for the Ohio State defense. With a big offseason, Browning can go from a part-time player to a defensive superstar. That all starts just hours after the Fiesta Bowl loss.

Five Questions as Buckeyes start building for next season
Where will Buckeyes turn to fill quarterbacks coach vacancy?
Advertisement