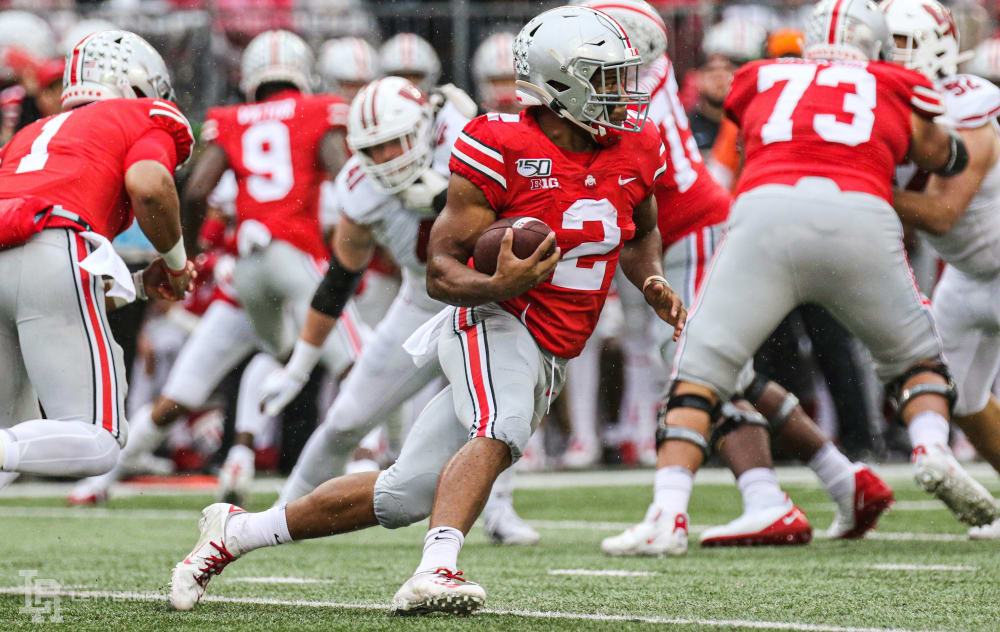 Ohio State running back J.K. Dobbins has been on fire for the Buckeyes lately. (Birm/Lettermen Row)

COLUMBUS — The degree of difficulty is subject to change each week at Ohio State, but the importance of every game is the same no matter what.

The Buckeyes are striving for perfection. As farfetched as it might seem this week against a struggling Maryland squad or next week against hapless Rutgers, the mindset at the Woody Hayes Athletic Center all season has been embracing the possibility that any opponent can take that unbeaten record away from it.

That was true in Week One. And even now into November after establishing themselves as the No. 1 team in the country, the Buckeyes haven’t changed at all — and the mantra keeps getting repeated before every game like the one on Saturday in the Horseshoe for the 44-point favorites.

“If you’re where we’re at right now, when you’re undefeated at this point in the season, they’re all big,” Day said. “If you don’t think they’re big, try losing one, see how that goes. They’re all big.

“We just can’t get bored with that. We have to continue to embrace that, understand how important it is. That’s a huge part of being tough, is being disciplined enough to do the same things week in, week out, not stray from that, start to fray as a team. That’s the focus.”

The Buckeyes almost certainly don’t need to be at their best to survive against the Terrapins, which even last year’s near-disastrous upset against the East Division foes helped prove. But that’s no longer the standard at Ohio State, which is measuring itself against its own potential and trying to show why it deserves to be the top-ranked team in the country every week — which means the picks were again unanimous at Lettermen Row that Day’s squad would stay unbeaten.

But beyond the score, our staff provided their weekly Bold Predictions about what else might happens for the Buckeyes against Maryland.

The superstars on the Ohio State roster have been taking turns in the spotlight, and Jeff Okudah is due for another signature moment or two. While the attention has primarily focused on Justin Fields, J.K. Dobbins and Chase Young, the junior cornerback has just kept grinding away while making a case that he’s the best in the country at his position. It’s been a few weeks now since the Thorpe Award semifinalist got his hands on the football, but that’s going to change against a suspect Maryland passing attack. Not only will Okudah snag an interception, he’ll add to his award-season resumé by taking it back for a touchdown.

Despite leading the way for Ohio State most of the time this season, J.K. Dobbins — the country’s fourth-leading rusher — will be outgained on the ground by his bruising counterpart against the Terrapins. At Maryland a year ago, Dobbins recorded his only career 200-yard rushing effort, and the focus for Maryland will be making sure that doesn’t happen again — meaning Justin Fields will be tasked with carrying the majority of the first-half load on Saturday in Ohio Stadium. Once the Terrapins are softened up and worn down, it’s going to be Master Teague who grinds out the game’s last quarter and a half. The sophomore will lead the Buckeyes in rushing yards because of it. 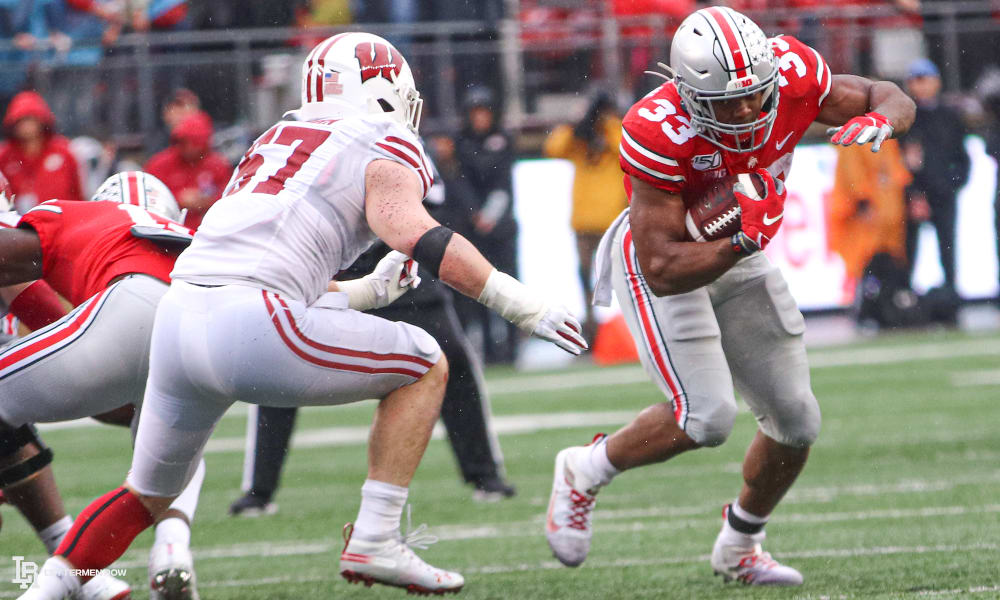 The stage could be set for Master Teague to post big numbers for Ohio State against Maryland. (Birm/Lettermen Row)

Against what was the nation’s No. 1 defense against the rush two weeks ago, Ohio State rushed for 264 yards on 50 carries, led by J.K. Dobbins (20 carries for 163). Maryland presents the nation’s No. 57-ranked rush defense this week. What has set the Buckeyes apart this year from the 2018 model is the intent to establish the run undeniably, especially between the tackles. With that in mind, Dobbins goes for at least 130, Master Teague perhaps tops him in what’s expected to be an extended tour of duty — and the Buckeyes surpass their season team high of 368 set at Nebraska. Because the motto of the Ohio State offensive line this year sure seems to be: “Pave it forward.”

The longest pass of the season for Justin Fields is the 60-yard touchdown to Binjimen Victor, which only traveled about 10 in the air. The second-longest was a touchdown to K.J. Hill, which didn’t travel the full 53 yards in the air. The thing is, though, Fields throws a beautiful deep ball. And he can be accurate with longer throws. Maryland is ranked No. 111 in the country in passing yards allowed per game, and Ohio State’s wide receivers are speedy and skilled enough with route concepts to hit a deep ball against a bad Maryland secondary. Look for Fields to perfect the long-ball before the tough two-game stretch at the end of November.

Will Crall: Garrett Wilson will return punt for touchdown

Each time Garrett Wilson returns a punt, the dynamic freshman gets closer to returning it for a touchdown. The breakthrough is coming, and the matchup against Maryland and a chance to take over as the starter on special teams represents a perfect opportunity to take one to the house. Demario McCall has been Ohio State’s primary punt returner for most of the season. Wilson, though, has proven to be the more dangerous option — averaging 16 yards per return, more than double what McCall has done so far this season. Wilson will cement his role as the Buckeyes primary returner with a touchdown against the Terrapins.