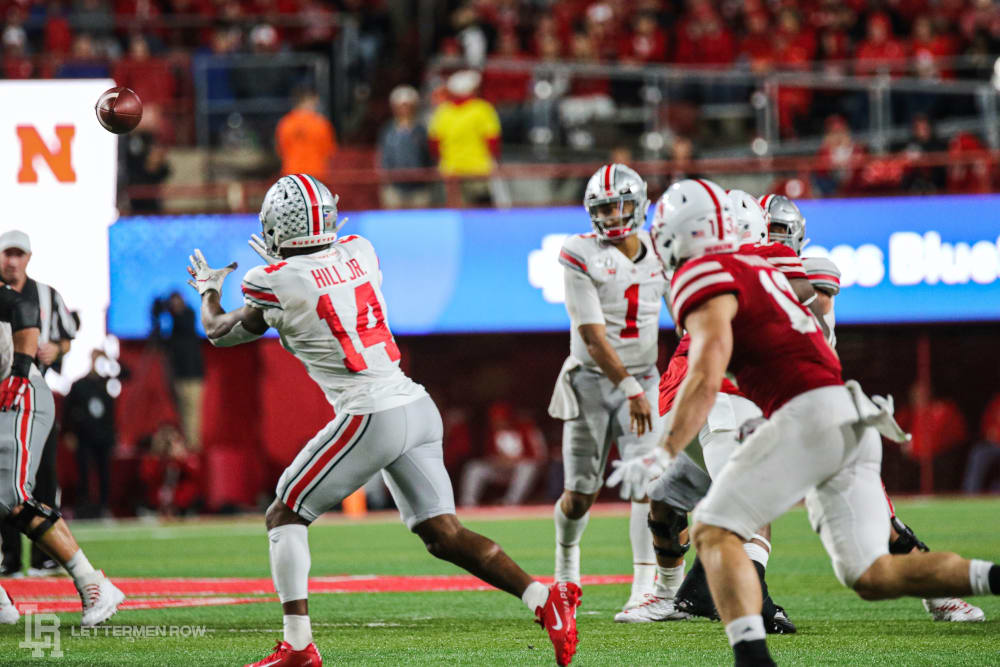 COLUMBUS — Ohio State rolled through the first half of the season.

The Buckeyes are 6-0 for the fourth time in the last five years, and they have looked good doing it. Their closest margin of victory is 24, and the Silver Bullets defense seems to have things figured out from a year ago. First-year head coach and first-time starting quarterback? No problem.

But the first off week is here halfway through the season, and it comes at a good time. After a physical win over Michigan State, the Buckeyes were banged up and ready for rest.

“I’m definitely glad we have a bye week next week,” quarterback Justin Fields said after the win over the Spartans. “I think we’re all just get in the training room, just get our bodies back right, just get ready for the game.”

Before the Buckeyes begin to prepare for the second half of the season and a trip to Northwestern, Lettermen Row has some first-half awards to hand out.

Can you give an individual award to an entire unit? The Ohio State defense has gone from worst in school history a season ago to one of the best in the country with nearly the same roster of players.

Through the first six weeks of the season, the Buckeyes are giving up just 8.6 points per game, which is fourth nationally. They are allowing only 85 yards per game on the ground and 138.8 passing yards per game. Ohio State is also averaging 4.8 sacks per game, led by Chase Young and the defensive ends. New defensive coordinators Jeff Hafley and Greg Mattison have figured something out, and the Silver Bullets are back to the standard set in years past.

Last season, K.J. Hill found quite a bit of success on crossing routes. The crossers were seemingly always open due to the confusion caused in the middle of the field, and Hill would catch a pass easily. But those routes haven’t been a big part of the Ohio State offense yet this season through six games. Why? Well, the Buckeyes torched Michigan with them last season, and it isn’t as easy to run those routes after teams have an entire offseason to defend them.

Hill’s response: “It definitely is, but I just got to find more money other ways.”

Ohio State cornerback Jeff Okudah has been one of the best defensive players for the Buckeyes this season, and he finally picked off his first pass of his career against Miami on Sept. 21. But he outdid himself against Nebraska the next week, picking off a pass from Cornhuskers quarterback Adrian Martinez on the first drive of the game. Then with the Buckeyes holding on to a two-score lead and the Cornhuskers driving, Okudah fell down attempting to help cover Wan’Dale Robinson. He must have been in the right place at the right time, because he caught a tipped ball while on his back for his second interception of the game and third of his career.

In the third quarter against Miami (Ohio), Chris Chugunov was already in at quarterback, and the starters hadn’t played since the second quarter. But the offensive play of the year still happened. Chugunov threw a 50-50 ball deep into the end zone, and Garrett Wilson, the five-star phenom who is beginning to contribute valuable time in key situations, went up and over a Miami defender for an acrobatic juggling catch.

The play looked similar to the grab he made in the Ohio State spring game back in April, only this one actually counted in a game. It was a coming-out party of sorts for Wilson, who is expected to make more plays like that as his career progresses. For now, he’ll have to settle for the best offensive play of this season’s first half.

Ohio State didn’t have a signature nonconference game on its schedule this season, but that’s only because the TCU game from last year was supposed to be a two-year home-and-home, but got switched to a one-year deal at a neutral site. The Buckeyes have beaten two teams that were highly regarded entering the season. Ohio State went on the road and beat Nebraska before turning around and picking up its best win, a primetime home win over Michigan State.

The Buckeyes rushed for over 300 yards on the vaunted Michigan State defense and put up 34 points, 24 of which came in the second quarter. Ohio State’s next game is against Northwestern, where the Buckeyes most likely won’t be challenged. Until they play Wisconsin on Oct. 26, the win over the Spartans will be their best win.