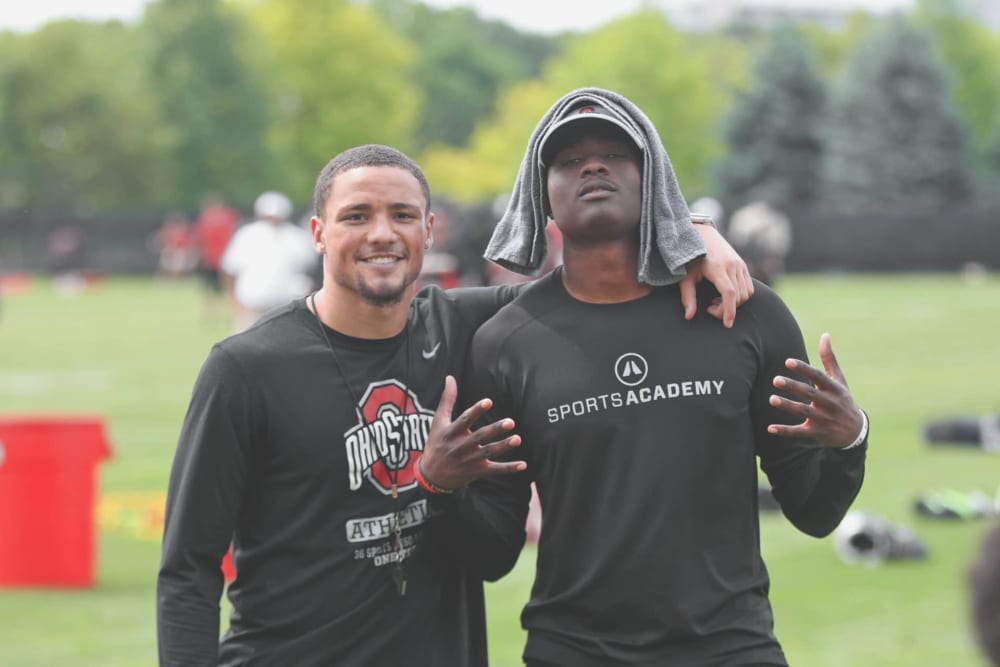 The first time clearly wasn’t a fluke for Dwayne Haskins.

Ohio State’s new starting quarterback is always looking for opportunities to get better, and the redshirt sophomore seems to have a knack for finding some of the best players in the game to push him even when he’s away from campus.

Much like Haskins did in the spring when his connections to NFL wide receiver Mohamed Sanu wound up leading to him throwing bombs to Pittsburgh Steelers star Antonio Brown as well, it appears he’s expanded his circle of workout partners again after throwing with Deshaun Watson over the weekend. The former Clemson standout and current starter for the Houston Texans also had company from 5-star Georgia passer Justin Fields, no doubt making for some heated offseason competition based on the photos posted from the session by quarterback guru Quincy Avery in Atlanta.

If the spring break trip already wasn’t enough evidence, Haskins has now doubled down with his high-profile trips when he’s away from the Buckeyes that are anything but vacations.

Not so long ago they used to say you couldn't be black and play QB. This pic says different. One of the best in the game imparting some wisdom on the future of the game. . . . . 📸: @_brycefrance #motivate #inspire #motivation #fitness #inspiration #success #life #goals #mindset #health #instagood #motivational #entrepreneur #lifestyle #positivity #instagram #nfl #collegefootball #football #quarterback #qb #collegeathlete #athlete #buckeyes #ohiostatefootball #uga #ugafootball

“It was a lot of fun,” Haskins said this spring after his experience with Brown. “Every opportunity I can get better, I take that. … [Brown] was pushing me, pushing himself.

“Whether that’s with an NFL receiver or my guys right here in college, I want to be able to better myself and be able get to the next level. And by me going to spring break, and not only experiencing Miami but working out, that just helps me out.”

Continued improvement for Haskins only has more value now that he’s officially in line to lead Ohio State at the most important position on the field. That wasn’t as certain during March when he was down on South Beach and in the middle of a head-to-head battle with Joe Burrow to claim the starting job. Haskins eventually claimed that spot after a productive camp when Burrow elected to graduate and transfer to LSU.

The rocket-armed Haskins has been generating no shortage of buzz for his potential since coming off the bench to lead a comeback victory over Michigan in The Game last season. And even that small sample size showed how his accuracy, ability to stretch the field, poise and better-than-advertised mobility can make him the ideal fit for Urban Meyer’s power-spread offense.

There is obviously still room to grow for a quarterback who has still not even started a game for the program. But based on the social-media trail Haskins and his high-profile buddies are leaving behind, it’s not that hard to see that he’s taking that process seriously even when he’s not at the Woody Hayes Athletic Center.

“I basically call Mohamed Sanu my uncle because we grew up together,” Haskins said this spring. “I knew him, he was down there, so I called him and we worked out. It’s grueling. From the first rep to the last rep, everything is 100 miles per hour. Really calculated, they have a plan to everything they do and that’s how I want to be with my offense.

“Now, what can I do to bring this NFL atmosphere, this NFL work ethic to my offense?”

Now Haskins has that insight from yet another NFL star. And it’s probably a safe bet that Watson won’t be the last to share some workouts and tips with the new leader at Ohio State.

Ohio State will win opener easily — and there is value to starting that way
BuckIQ: Healthy Mike Weber is difference-making rusher for Ohio State
Advertisement