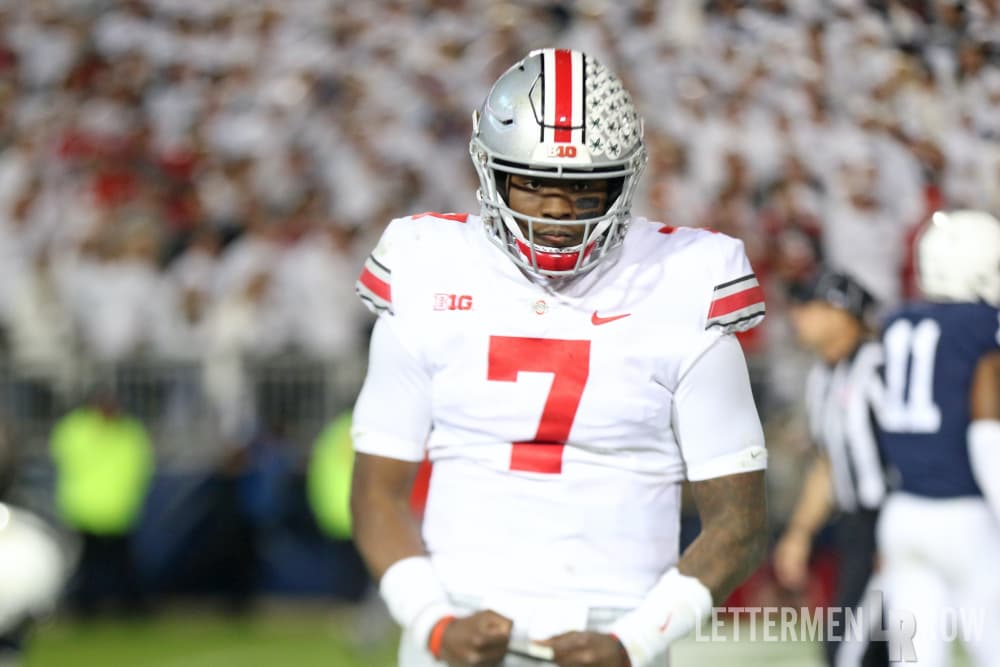 Dwayne Haskins put the Buckeyes on his shoulders in the fourth quarter at Penn State. (Birm/Lettermen Row)

STATE COLLEGE, Pa. – On Saturday morning, Penn State defensive end Shareef Miller was interviewed by ESPN and asked about Ohio State quarterback Dwayne Haskins. Miller, speaking candidly, made it known that he believed Haskins wouldn’t be able to withstand what the Nittany Lions were bringing his way.

“To slow him down, you just gotta hit him,” Miller said. “A couple of guys on our team played with him, they told me if you hit him a lot of time’s he’s gonna fold.”

Haskins, likely acting against the would-be wishes of his coaches, made sure Miller knew he was aware of the comment.

Haskins, nicknamed “Simba,” turned into the Lion King a few hours later in an epic 27-26 comeback in a Penn State Whiteout. And the maturation of a future NFL first-round draft pick continued in front of the largest crowd to ever stuff themselves into Beaver Stadium.

Road games are tough, no matter how many of them guys have played in previously. Haskins was on the field for a little more than a quarter last November in Ann Arbor and rallied Ohio State to a comeback win at Michigan. That is something many seemed to have forgotten prior to Saturday’s contest at Penn State when the narrative was that Haskins had never faced a tough road environment,

That’s why the majority of the prognosticators who decided to prognosticate on Ohio State’s trip to Penn State believed the Nittany Lions were in a prime position to pick off the No. 4-ranked Buckeyes.

Instead, what they saw was a different kind of prognostication come to fruition — one that began on Jan. 18, 2016, when he and junior wide receiver Binjimen Victor both announced their intention to matriculate to Ohio State.

“Dwayne is the major reason I came here,” Victor told Lettermen Row. “We were both talking about going to other schools, he had been committed to Maryland and I was thinking about Florida. But when I heard he was coming here, that really changed things for me. I saw him at camps and at [Nike’s recruiting combine] The Opening and I just knew he was different.

“He’s waited his turn, but me and him and Austin [Mack] have been working for this moment. We knew what he could do and knew he would when he got the chance. That’s why we’re here. I wanted to play with a great quarterback, and that’s what he is.”

The atmosphere inside Beaver Stadium was electric. Haskins did get hit, especially in the first half. And he was tested, but he didn’t fold. He’s been the quarterback of this Ohio State team for five games now, but on Saturday he became the leader of it.

Haskins led the Buckeyes by keeping cool, calm and delivering when it mattered the most. He completed  7 of 10 throws for 138 yards passing in the fourth quarter, more than doubling his yardage output from the first three quarters. He had help from his wide receivers, but he also trusted his wide receivers even though they hadn’t made a few players earlier in the game.

With everything on the line, Haskins stepped up and marched his offense 96 yards to a season-defining touchdown in what Urban Meyer called one of the “great drives in Ohio State history.”

“We just had adversity to earn, we had to keep fighting, keep swinging,” Haskins said. “You know it wasn’t pretty, pretty much the whole game, but we relied on each other, we had faith in each other and we came out on top.”

For a player with as much physical potential as any quarterback in Ohio State history, the push to get better mentally is the priority to be ready for the big moments.

Because Dwayne Haskins has clearly taken that step, the Buckeyes still have a chance to create some much bigger moments moving forward — unbeaten.