COLUMBUS — Ready or not, the Heisman Trophy conversation is about to get louder for Dwayne Haskins.

The new Ohio State quarterback only needed one start to validate the offseason buzz about how his physical tools could combine with a loaded group of skill players to produce the kind of statistics that win stiff-arming statues. And while the level of competition is only going to get tougher moving forward, it was hard not to come away impressed with the strong arm, accuracy and composure Haskins showed in his debut as the full-time leader for the Buckeyes.

Of course, the numbers also back that up, since no first-time starter had ever thrown for 313 yards or 5 touchdowns like Haskins did in the rout of Oregon State on Saturday. 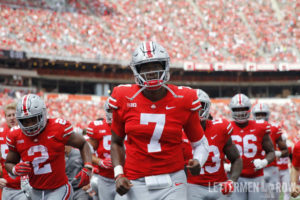 Dwayne Haskins has taken charge of Ohio State in a hurry. (Birm/Lettermen Row)

“The ball comes out of his hand quick as you can see, and he is a rhythm passer,” acting Ohio State coach Ryan Day said. “When he has a nice pocket and the guys are doing a good job in protection, the spacing is right, the separation with the receivers is right, then that’s when you can see we get into a rhythm and a tempo.

“That part is good.”

There was no arguing with the results, even if there was one hiccup with an interception that Haskins admitted immediately after the game he needed to clean up moving forward.

But the rest of his outing against the Beavers suggested Haskins is ready for the responsibility at such a crucial position for the Buckeyes. And that means he should probably get prepared for a lot more attention and some questions about a possible run at the most coveted individual award in college football.

Troy Smith knows all about both of those things, of course. And now that there is some fresh footage to break down, the former Ohio State star returned to the Lettermen Row film lab to look at a few plays that point to a big year for Dwayne Haskins — and maybe the end of a Heisman drought that dates back to Smith’s trophy-winning season in 2006.