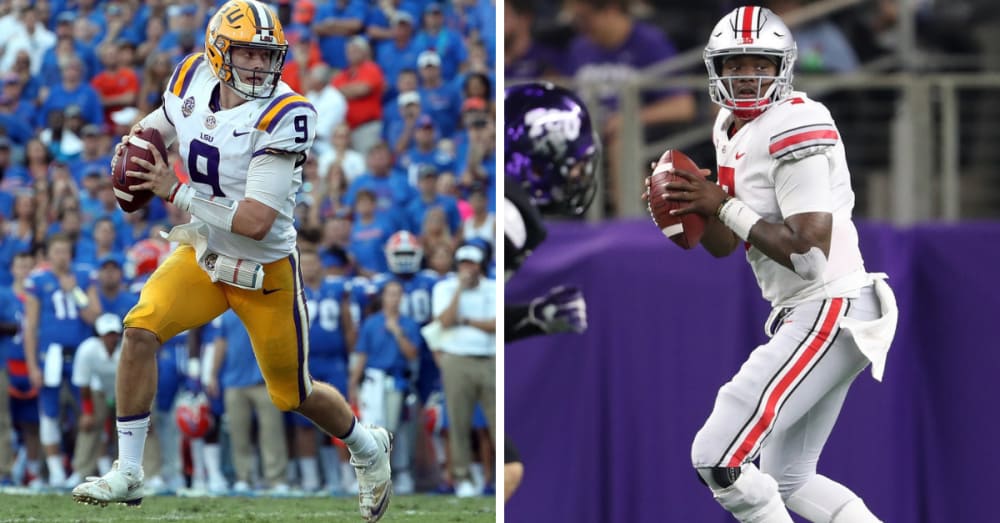 After competing all spring at Ohio State, both LSU quarterback Joe Burrow and Dwayne Haskins with the Buckeyes are leading top-five teams. (Kim Klement and Matthew Emmons/USA TODAY Sports)

COLUMBUS — Dwayne Haskins was warming up for the biggest start of his young career, but the Ohio State quarterback kept sneaking peeks at the enormous video screen hanging over his head.

He wasn’t alone among distracted Buckeyes craning their necks up to get a glimpse at Joe Burrow, something that used to be a lot easier when he was warming up beside them instead of playing hundreds of miles away in an LSU jersey.

Quarterbacks coach Ryan Day stood at the back of the end zone with a clear view of a smaller screen at AT&T Stadium. The Ohio State fans that traveled to Dallas for the TCU matchup cheered with every completed throw and first down conversion. Offensive coordinator Kevin Wilson walked over to the sideline to get a better look at key play and broke out a wide smile.

Of course, the Buckeyes would have loved it a whole lot more if Burrow were still around to provide depth at the most important position on the roster this season. But they certainly haven’t held his decision to use a graduate transfer and find somewhere he could be a clear-cut starter, and his old teammates and coaches have suddenly become huge fans of LSU. 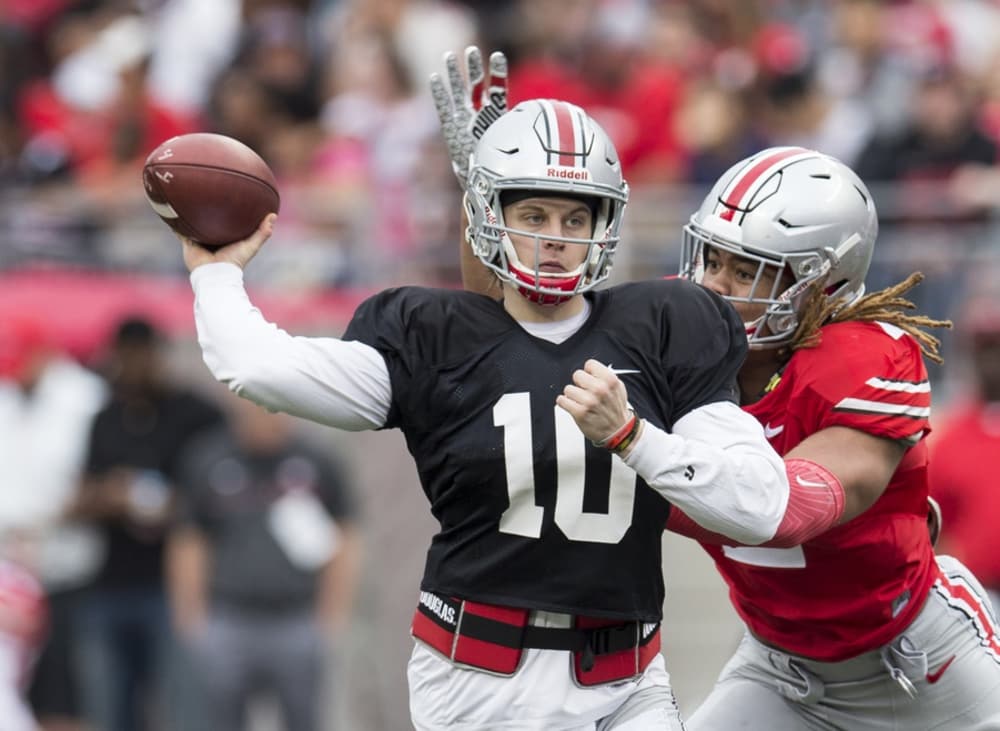 Sure, it helps take some sting out that Haskins has emerged as a surefire Heisman Trophy finalist and is rewriting the record books every week. But that hadn’t happened yet last month down in Texas when the Buckeyes were watching Burrow lead an upset win over Auburn, a feat he managed yet again with a stunner against previously unbeaten Georgia to move the Tigers up to No. 5 in the country.

“Yeah, I’m proud of both of those guys, and we take a lot of pride in our room,” Day told Lettermen Row. “We’ll text every now and then and just talk to [Burrow] about how it’s going and stuff like that. Just encouraging and congratulating him.

The Buckeyes are fully aware of how productive Burrow can be at his best. And it might have been a lot more fun for Ohio State if it had kept two quarterbacks capable of leading top-5 teams on the roster past spring practice.

But the way the season has played out so far, this outcome still offers some bragging rights — and a reminder that there was a reason the Buckeyes kept calling that competition too close to call.

“Only one guy plays at quarterback, and you also want to be a good teammate with everyone,” Haskins said. “You also have to compete at the same time. Just having Joe leave, he’s a really good friend of mine, love him very much and I’m excited for him at LSU. It was a really hard decision for him, but I’m really happy for him.

“Just being able to watch a little bit of those clips during warmups on that big-old Jumbotron in Dallas Cowboys Stadium, I was excited for him. To have that two-minute drive that he did, to make those plays that he did, I used to see it all the time in practice and spring ball whenever he was here. It’s different not having him on the field. His little mannerisms, his jokes that he was so famous for, but I’m happy for him.” 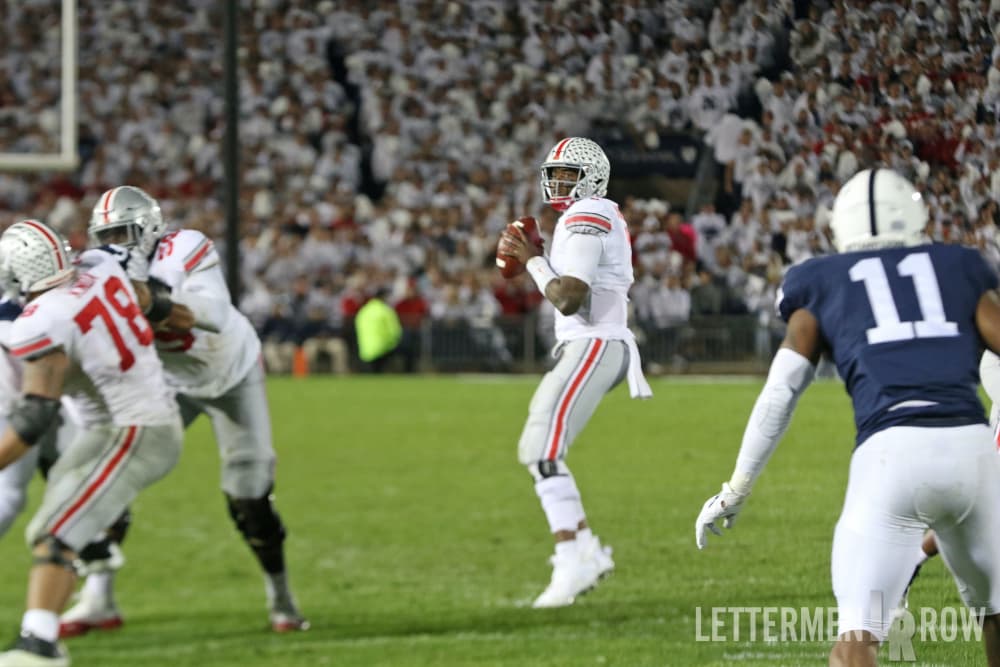 The Tigers are obviously thrilled to have Burrow, and that sense of humor is a nice bonus to go along with the playmaking and fearlessness that have helped position them for a potential dark-horse run at the College Football Playoff.

Burrow could just as easily be part of another championship bid with the Buckeyes this season, although Haskins has done his part to validate that he was the right guy to lead the program after a lengthy head-to-head battle that dates back to training camp last season as they fought over the backup job. Burrow’s broken hand last August and the way Haskins played off the bench to lead a comeback win in The Game combined in some respects to tip the scales, but everybody involved had to wrestle with tough decisions along the way.

“I mean, Dwayne is playing well,” Wilson told Lettermen Row. “The tough thing about practice is when you keep rotating those guys around, it’s hard for anybody to get in a rhythm. So, sometimes you really don’t know, and that’s why sometimes it stays close. Nobody says that because you want to be fair, and sometimes when you’re fair, you muddy the water. Our team likes Joe, and nobody wanted him to leave.

“I really felt like we’d be better with him here, but you want everyone to be successful and he’s such a good kid. He’s already having some success, and I know our coaches are happy about that, and I know our players feel that way, too. But then when you hear the fan base, I was like: Wow, that’s kind of cool. Sometimes it’s like, ‘OK, you left us, the heck with you.’”

Instead, Ohio State has thrown its support behind a program that once beat it for a national championship, with even the student section making an effort to show that it continues to stand by Burrow no matter where he’s playing now.

In return, Burrow has made sure that somebody on the LSU sideline is able to feed him score updates on the Buckeyes when they’re playing at the same time. 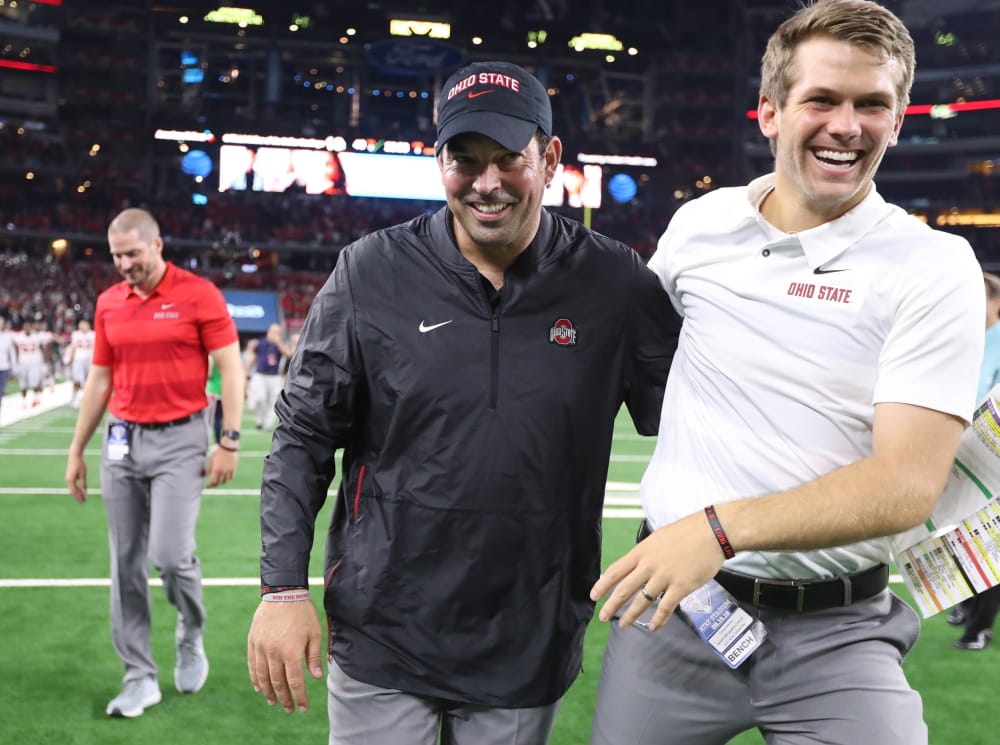 Ryan Day watched one of his old quarterbacks win on the video screen in Dallas — then beat TCU with Dwayne Haskins later. (Matthew Emmons/USA TODAY Sports)

“I was getting excited on the sideline about that during the fourth quarter [in the Penn State game],” Burrow said on 97.1 The Fan earlier this month. “ … It really meant a lot to me, the cheering from the Ohio State fans and my former teammates at that TCU game. That was really cool and really meant a lot.

“You know, it was just getting to the point in my career where I kind of had to either play or go find a new opportunity, because I don’t have too much time left. They decided that they wanted to go through the fall and fall camp with the competition, and with Dwayne playing well against Michigan last year and me breaking my hand that season, too, I felt like he was going to be the guy. This was my opportunity to go find something else.”

Burrow found what he was looking for, and now he’s got a chance to influence the College Football Playoff down in SEC country.

The Buckeyes wound up with a Heisman Trophy candidate leading the offense, and they’re in control of the Big Ten race.

Maybe by the end of the season, there’s a chance they won’t need a cellphone or a massive video screen to keep tabs on each. But until then, they’ll both just have to settle for any glimpse they can get.

“We follow each other on social media, and every now and then we text,” Haskins said. “It’s hard when I’m busy, he’s busy. But we’re watching each other from afar.”

So far, the two Ohio State quarterbacks — one current, one former — are both putting on a show that nobody wants to miss.