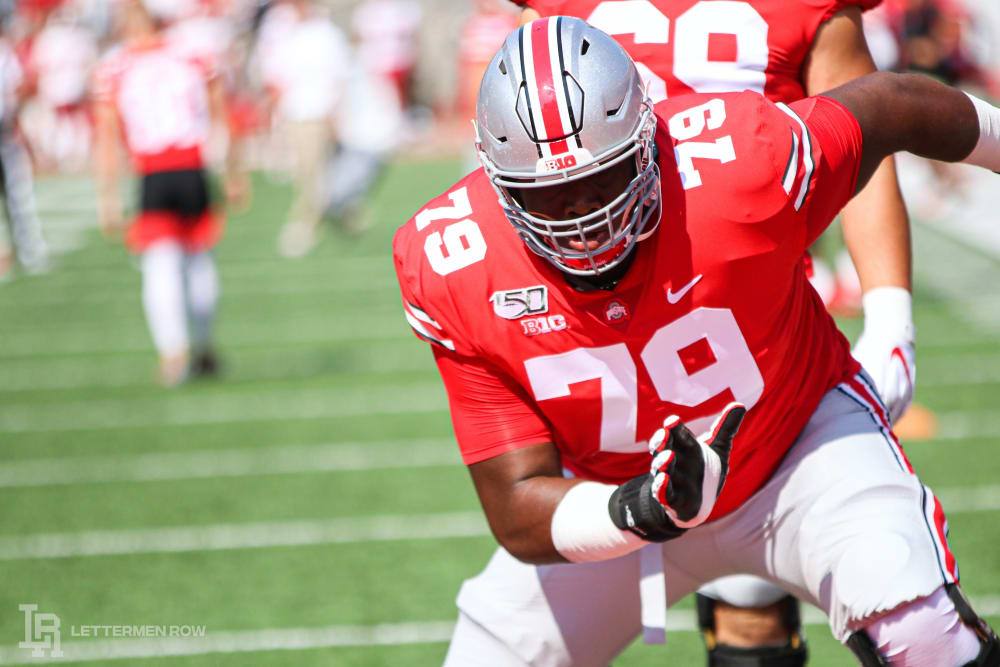 Dawand Jones has a chance to break out in a big way at Ohio State. (Birm/Lettermen Row)

Ohio State had one of the best seasons in program history last year, and it came with the help of some young players. Now as the younger Buckeyes enter another year for the Buckeyes, they may be expected to take on expanded roles. Lettermen Row is breaking down a play from each key inexperienced Buckeye and how it can help provide a glimpse into each of their futures. Next up: Dawand Jones and his massive frame can move the line of scrimmage for Ohio State.

COLUMBUS —  This wasn’t the plan Ohio State originally had for Dawand Jones.

Last season was supposed to be a redshirt season, one in which Jones could shed some weight and develop into a role player down the road for the Buckeyes. But the plan changed midseason. Jones found a spot helping the Buckeyes block field goals. Then he moved piles and helped the second-team offense find the end zone.

With a massive frame, Jones can be an asset for Ryan Day and Ohio State. And although he played in too many games to redshirt a season ago, he’s still developing and finding the right playing weight.

“I came in, lost 20, 25, 30 pounds,” Jones told Lettermen Row. “I’m just going to keep losing them so I can be at a good weight that I can play at. Honestly, at 360, it does feel better. It feels better. So if I lose some more weight, it will probably feel even better. I just want to keep grinding down and keep getting in the weight room, running and conditioning and cardio. All that to get down to where I need to be.”

That seems to be the goal for next season. He has to find the right weight. But head strength and conditioning coach Mickey Marotti has rarely ever seen a player with Jones’ size who carries it the way he does. It presents a challenge.

“We have to be creative in keeping his weight down,” Marotti said. “He likes basketball, so I told him I’ll get one of our interns to feed him the basketball. He can do jump shots for two hours in a row and see how much he sweats.”

But the weight and size can be used in certain situations, like when Jones washes down an entire defensive line to create a running lane for a running back. And that’s just what Jones showed he can do.

The play: Late in a blowout victory over Northwestern, Jones found himself earning some reps at left tackle, blocking for backup quarterback Chris Chugunov.

On the first play of the drive, Jones washed down the entire defensive line. Running back Master Teague ran directly off Jones’ trail and took the carry 73 yards untouched for a touchdown.

That was against the backup defense for Northwestern during the late stages of a 49-point Ohio State win. But the blueprint for how to use Jones is there. And it seems to be simple. Jones is 6-foot-8 and 360 pounds. It’s hard for defensive linemen not to be moved when he is pushing down.

And it’s easy for running lanes to open up when the huge Jones is the one pushing the defensive line.

Maybe Dawand Jones won’t win the starting right tackle spot over Nicholas Petit-Frere or Paris Johnson. Jones still needs time to develop. But when he’s ready to make an impact for the Buckeyes, Jones will be ready to throw defensive linemen out of the way.