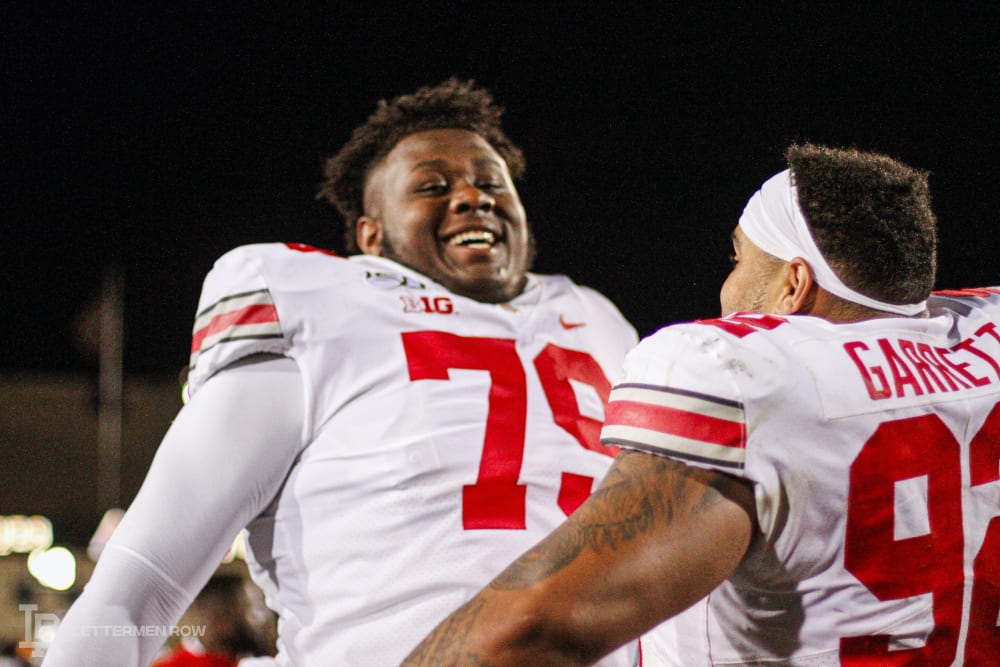 Ohio State freshman Dawand Jones is making a huge impact when he gets a chance for Buckeyes. (Birm/Lettermen Row)

The speculation, debate and conversations about Ohio State never end, and Lettermen Row is always ready to dive into the discussions. All week long, senior writer Austin Ward will field topics about the Buckeyes submitted by readers and break down anything that’s on the minds of the Best Damn Fans in the Land. Have a question that needs to be tackled, like the one today about the Ohio State and the work of Dawand Jones? Send it in right here — and check back daily for the answers.

Who is this Dewan Jones guy? How big is he! He made the other linemen look like kids. Could they use him like "the fridge" Perry?

Dawand Jones was supposed to be a project, and the developmental phase was almost certainly going to require a redshirt season.

But it turns out there are other ways to use somebody with the Ohio State freshman’s rare size at 6-foot-8, 36o pounds and uncommon athleticism for a lineman that massive. And since Jones has the potential to be a weapon on the field-goal block unit, the ability to potentially be an extra-large asset in short-yardage situations and perhaps even to provide depth at tackle, the Buckeyes are no longer expecting to cap him at four games.

Watching Jones collapse one side of the Northwestern defensive line on Friday night late in the dominant win or seeing how much attention he commanded early in the season to help free up Chase Young to block a kick, it’s becoming clear that Jones already can chip in meaningful reps even if he’s still a bit raw when it comes to playing his natural position at offensive tackle.

“He’ll probably go more than four, just because he is very talented,” Ohio State coach Ryan Day said. “We want to get him in some of these games when we can. His ceiling is very high. We want his development to continue. I really think it’s important for these guys to play. Again, we won’t be foolish with this and waste the year. But I think you saw that in the fourth quarter, on both sides of the ball, guys were into it, we were playing hard, competing. 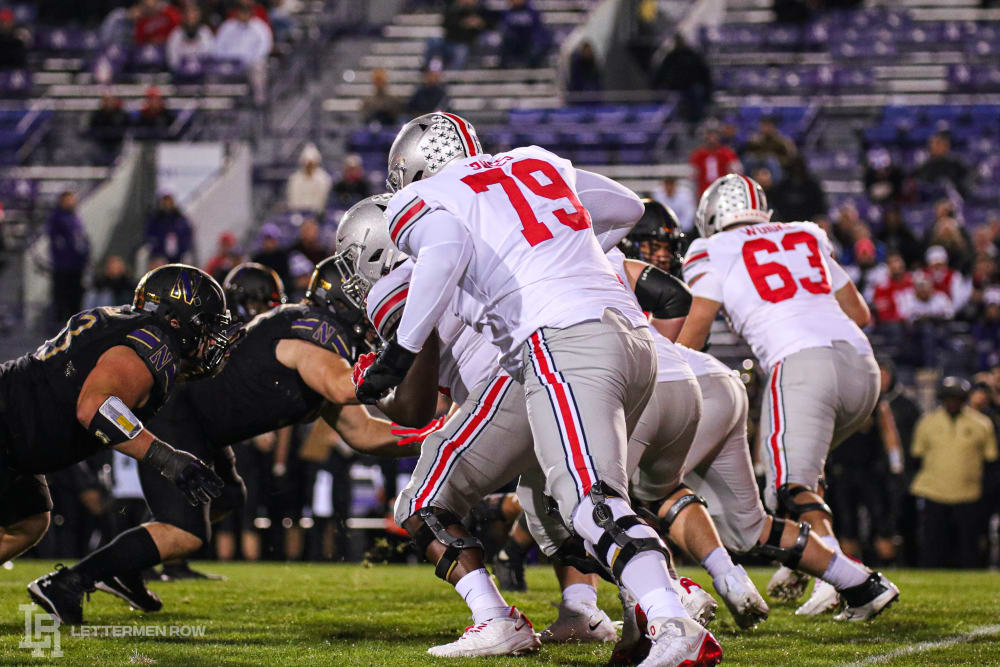 Ohio State freshman Dawand Jones made a big impression for the Buckeyes at Northwestern. (Birm/Lettermen Row)

The Buckeyes obviously aren’t going to go overboard with Jones, either. Sure, it would be quite a sight to see the big dude inserted as a fullback or additional tackle for a red-zone package — or even hand it to him William “Refrigerator” Perry-style and watch him move the pile for a touchdown. Ohio State doesn’t really need the boost in short-yardage situations quite like it might have a year ago, but now that Jones has played three times and continued to impress, that’s an option that will at least be on the table.

If nothing else, the fact that Ohio State took him on the road and played him in a Big Ten game speaks volumes about his development and how the program views Jones already. It’s also true that the Buckeyes were short-handed on the offensive line with Thayer Munford banged up and Josh Alabi out last week, so the original intention may have been just to have him as an emergency backup in case the offensive line needed it. The coaching staff could have kept him on the sideline late in the blowout to try to preserve his redshirt, though, and it chose not to do so.

Of course, if the Buckeyes hadn’t put him in, the world would have been robbed of the chance to see Big Thanos show off his speed as he pumped his fist racing down to celebrate the touchdown he helped create by opening a huge hole on the left side of the Ohio State offensive line. That alone might have been worth it for the entertainment and the jolt of confidence for the first-year guy.

There is undoubtedly a lot of work still ahead of Dawand Jones before he can be in the lineup more consistently for the Buckeyes at tackle. But it’s now safe to assume that more chances to help in some form or fashion are on the way, and he’s hard to miss once he gets out there.

Continue Reading
You may also like...
Related Topics:Featured, dawand jones