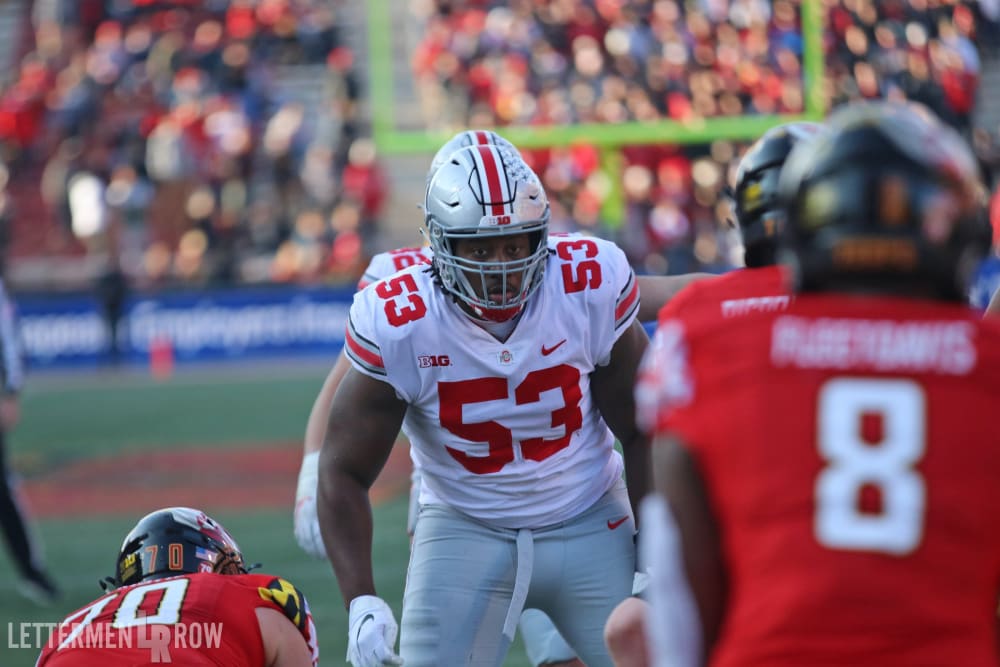 COLUMBUS — Premier defensive end Chase Young has to sit out a second straight game, the one this week at out-manned Rutgers, before stepping back into his role as The Predator for Ohio State. But for the second straight week that should be no problem for the Buckeyes defensive line.

That is, as long as The Force makes the trip.

“I mean, you say I’m a force, but I just try to do my job as best as possible,” fifth-year senior DaVon Hamilton said.

The 6-foot-4, 310-pound defensive tackle made it his mission to turn the pocket inside out against Maryland. That was while Young, who usually operates from the outside in, served the first of his two-game suspension for the NCAA rules violation of taking a loan (and paying it back) late last year.

Spurred by defensive line coach Larry Johnson, Hamilton and defensive Tyreke Smith had two sacks each and headlined the defensive assault that led to a season-high seven sacks for Ohio State despite the absence of the nation’s top sacker Young (13.5). Hamilton is not an elected captain for No. 2 Ohio State, but he stepped forward as if in command, then led the charge through the heart of the Maryland offense. 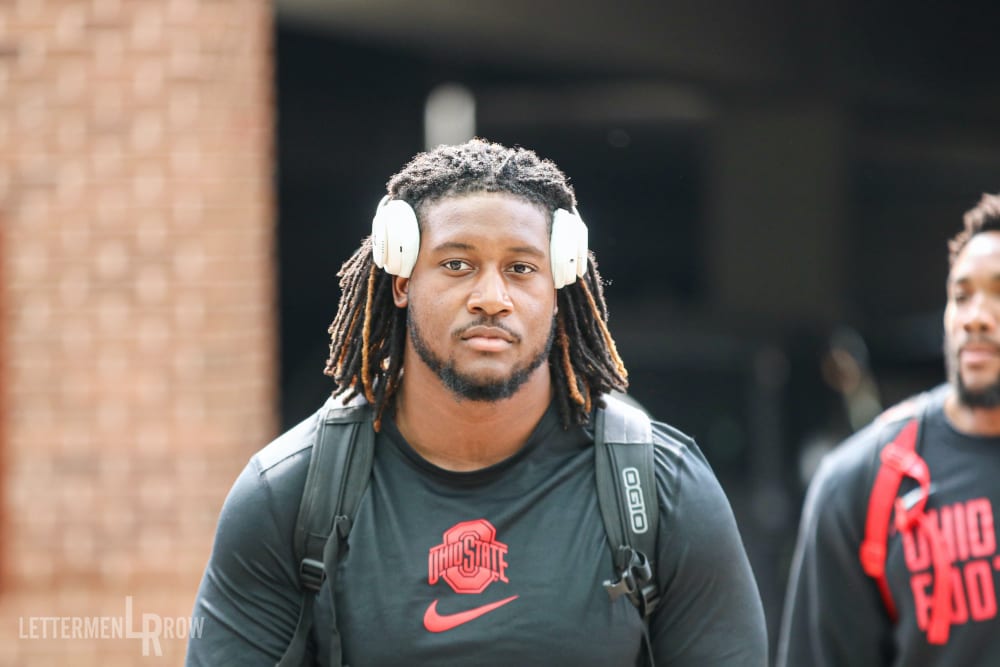 Hamilton’s rise to being a force this season has been obvious. Include Ohio State athletic director Gene Smith among those who have taken note. A former defensive lineman at Notre Dame in the mid-1970s and former roommate there of All-America Ross Browner, Smith knows good big-fellow play when he sees it.

“You just look at how he has developed over time physically, and with Larry’s teaching, his techniques are sound,” Smith said. “I think he obviously is a Sunday [NFL] kind of guy. He’s very disruptive. He’s smart. I love DaVon, because on top of everything he’s a great human being.”

Now take the word of freshman backup center Harry Miller. A five-star signee in the most recent Ohio State recruiting class, Miller has had many welcome-to-major-college-football moments on the practice field, thanks to Hamilton.

“He has the most massive arms I’ve ever seen in my entire life,” Miller said. “To have him as a noseguard, and just thinking about having to reach him and think about blocking him and think about pass protection against him, it is a thing that strikes fear into me.

“I don’t know how many wonders of the world there are. But he is – I don’t want to say last one, but he is the second to last one. He’s incredible. His character is amazing, and he and BB [Robert Landers] are incredible mentors for me. I love being able to go up against them and get their best shot every day.”

Starting center Josh Myers has even more experience trying to protect the A gap against Hamilton.

“He’s just so strong, so powerful, but he also has the quickness,” Myers said. “Usually guys like DaVon Hamilton have one or the other. He has both. And he’s really, really hard to block, especially in pass protection. 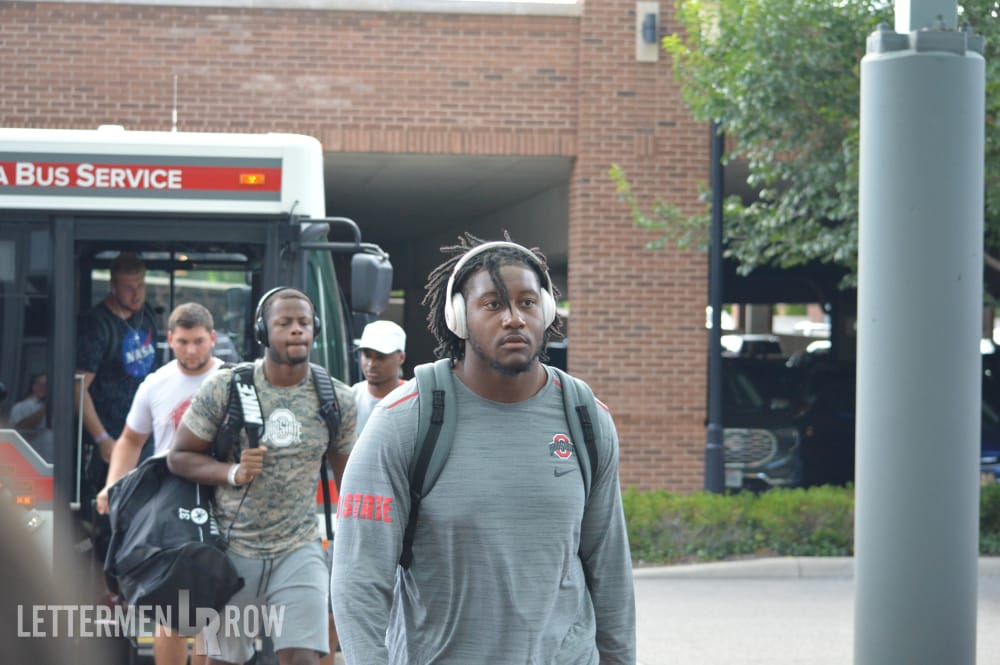 “You never know what he’s going to hit you with. He’s so strong he can pull you all the way into the quarterback. Or he can hit you with a move and beat you with his quickness. He’s a really tough guy to block.”

Being on point technique wise is the only counter punch.

“If you bring any technical flaws to the table against him, you’re going to get exposed, so it makes me perform to the best of my ability,” Miller said. “It’s something that’s taught me more about myself than I can imagine.”

Hamilton shies from the praise, even though it’s obvious his effectiveness has gone up a couple of notches in his final college season. For example, the way he dented the interior of the acclaimed Wisconsin offensive line three weeks ago, on a day when Young had a school record-tying four sacks, was textbook nose tackle play.

“I feel like that has a lot to with experience,” Hamilton said. “I just go out there and try to play as fast as I can.”

It’s why his name has come up as possible All-America material at season’s end, since he’s the pivot point on what at the moment is the nation’s top-ranked defense against the score, in total defense, most efficient against the pass, and No. 8 against the rush. One reason is because he and fellow defensive tackle starter Jashon Cornell as well as Landers, Tommy Togiai, Haskell Garrett and others have taken a relentless attack approach.

“I feel like we just have to impact the quarterback,” Hamilton said. “A lot of time quarterbacks don’t like inside pressure. It’s different coming from the outside, because [the quarterback] can step up. But when you’re pushing the pocket inside and he can’t step up anywhere it makes it hard for him.”

The Buckeyes proved that against Wisconsin, Maryland last week and intend to pillage Rutgers this week. Then next week against Penn State, Young, the recognized best pass rusher in the game, will return to line up alongside DaVon Hamilton.

The Force and The Predator — together again. It has the makings of a sequel.

How prepared are Buckeyes when — or if — streak of blowouts ends?
Viewing guide: Time, TV channel, What to Watch for Ohio State at Rutgers