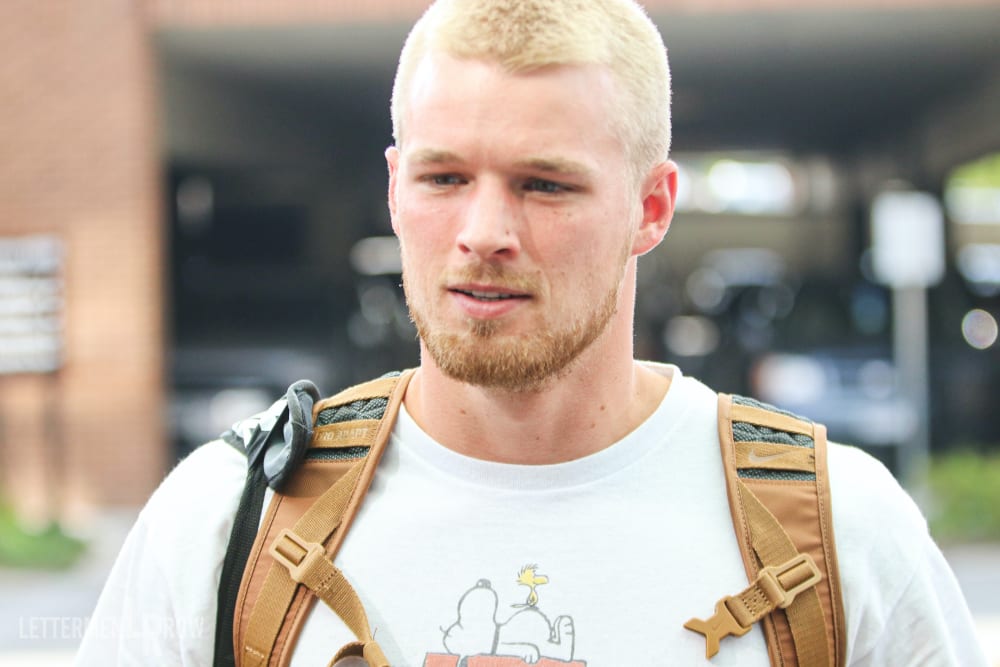 COLUMBUS — C.J. Saunders always has had a sense of belonging in regards to his place on the Ohio State football team.

Yes, he showed up as walk-on, all-purpose talent in 2016, who at 5-foot-10, 165 pounds, appeared to be more suited to play one of his other favorite sports, baseball — his father Tim is, after all, the baseball coach at Dublin Coffman. Then-Buckeyes coach Urban Meyer was impressed with the young man’s spirit and abilities, but wary of his size.

Saunders endured. He put on weight, slowly but surely. He switched from defensive back to receiver, and that’s when he said he “thought this could be real,” the chance to prove himself and play at Ohio State. Because that’s where his wiliness and determination gave him an uncanny knack for getting open, so much so that in the last few years he’s often been called upon to share some of those secrets with his much higher rated teammates.

Validation that he belonged came in the spring of 2017 when he was awarded a scholarship, which he backed up with a breakout seven-catch game against UNLV that fall. He has played in 11 games each of the past two seasons.

Certification that he didn’t waste his time at Ohio State came this past spring when he earned a degree in accounting from the Fisher School of Business; he’s now in post-graduate study for sports management.

Indelible salutation came this week. Saunders was elected one of seven captains for the Buckeyes’ 2019 season.

From walk-on to undeniable team leader, he’s made the rise — just like he knew he could. For he watched fellow receivers Parris Campbell, Terry McLaurin and Johnnie Dixon be elected captains a year ago. He saw it as a natural progression for both him and fellow receiver and captain K.J. Hill.

“I got to learn from them and see what being a captain is all about, to have that impact,” Saunders said. “So I think last year is when being a captain became a real possibility.”

Again, his sense of belonging had been there all along, though five years ago he wasn’t strongly recruited by any NCAA Division I school, much less by Ohio State — which for the most part focuses on four- and five-star prospects when it goes fishing. Or at the least, the Buckeyes go after fellows who look the part.

He knows his is a “pretty cool” story, but he thinks it’s more a testament to the Ohio State ethic of rewarding the deserving.

“It doesn’t always matter how many stars you have, or where you’re coming out of high school,” Saunders said. “It’s all about the respect you earn once you get here.

“You know, once you get to a place like Ohio State, everybody’s good, so it doesn’t matter if you came from nothing or came from everything. You’ve got to prove it every day. I’m thankful that I was raised [and taught] to go to work every day and treat people with respect. I think that’s a testament to my family and to the program itself.”

Just what his roles will be on the field this season, like frequency in the receivers rotation and on special teams where he could be a punt returner, remain to be seen. But his role as a leader has been stamped by his teammates and first-year head coach Ryan Day.

“What a great story for C.J. Saunders, somebody who comes in as a walk-on, earns a scholarship, is now a captain,” Day said. “Lifelong dream for him.”

Second-year receivers coach Brian Hartline, who has been around the program for going on four years, has watched the Saunders bloom from walk-on to scholarship earner to captain.

“That’s pretty unprecedented as far as it comes to his path,” Hartline said. “It’s phenomenal. He adds great depth to our room. He’s a warrior. He’s a machine. When I need a guy, he’s always that guy. And I’m very confident when he’s on the field.

“Now, he’s got to keep getting better … there’s a lot of things we still have to do, and he’ll tell you that. But what a great young man in our group, and one of our seniors, and captains.”

What We Learned from versatile Ohio State defensive backs
How reliable is backup quarterback situation for Ohio State?
Advertisement