COLUMBUS — There simply weren’t enough distractions available for Chris Olave during quarantine to shake the memory.

The Ohio State wide receiver would play some video games. He spent time with his brothers and was surrounded by positive energy from his entire family as they supported him in the painful aftermath of the broken route that essentially ended the Fiesta Bowl. And Olave also had plenty of Zoom and FaceTime chances to catch up with his position coach and the rest of a unit that might be the tightest of any on the Buckeyes roster.

But that didn’t completely fill all the time when Olave might have let his thoughts wander back to the desert and one of the only crucial moments so far in his Ohio State career where he didn’t come through for the program. And that wound up leading to a lot of extra workouts for a junior who is clearly on a mission to make sure that never happens again.

“It was tough,” Olave said before practice on Tuesday. “I mean, especially for me because I care so much about this team, this university. The first couple months were tough, and I still don’t think I’ve got over it. I was going through it for four or five months, especially during quarantine. But with all that free time, when I found myself getting bored and I was going through it, I would just go work out. I’d find myself working out two or three times a day, just trying to take my mind off things. 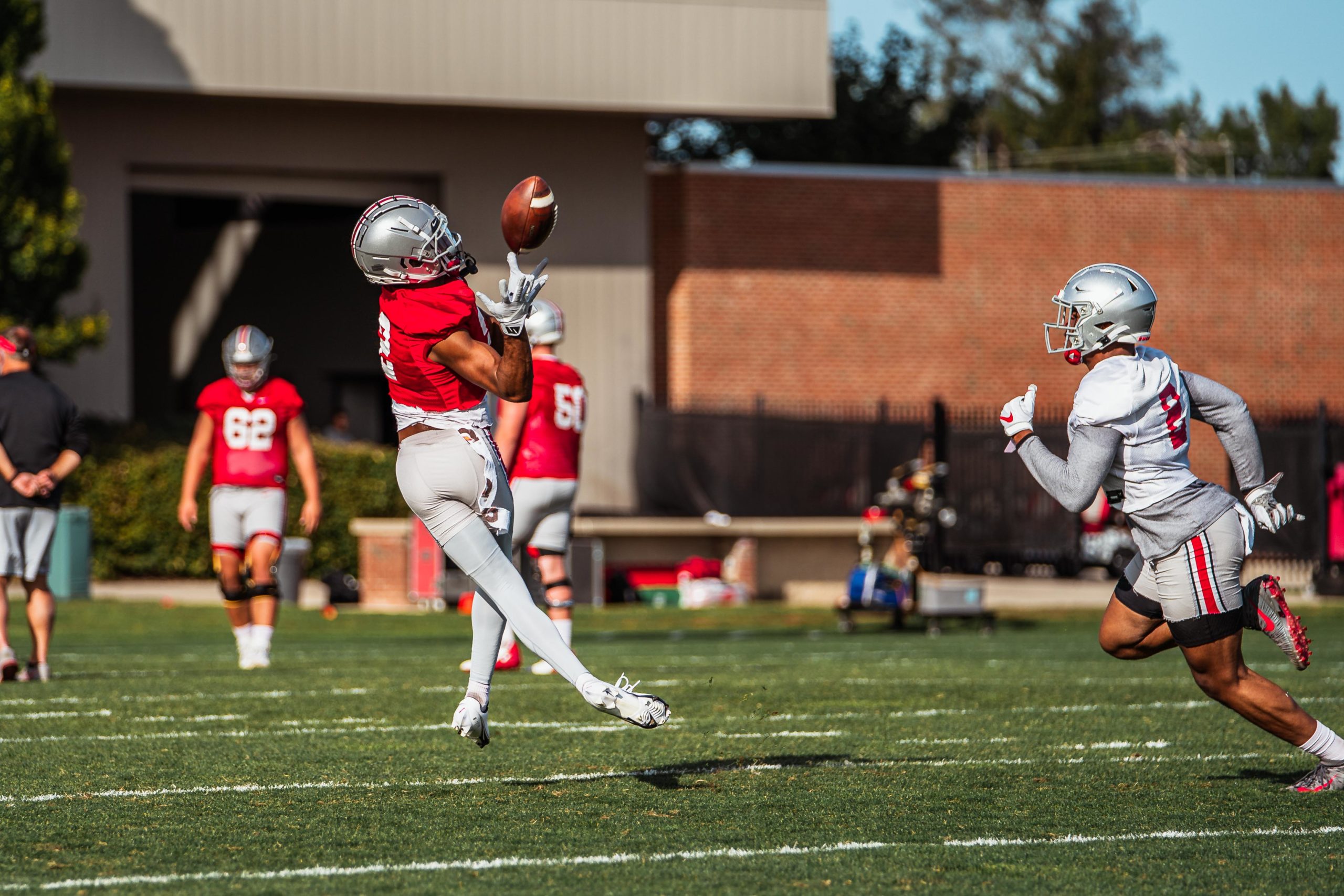 “When we got back [on campus], I just wanted to try to get better every day and spread that energy throughout the wide receivers room. We’re trying to be the best room in the nation. I don’t think I’m over it still, and I still have that chip on my shoulder. I want to show that to the world.”

Olave’s blazing speed, reliable hands and ability to deliver in the clutch are already well known in Columbus after racking up 60 catches and 15 touchdowns during his first two seasons at Ohio State. That one miscommunication against Clemson certainly hasn’t given the Buckeyes any less confidence in his game-breaking ability, and it really doesn’t change the fact that he returns this fall as one of the most dangerous receiving threats in the country.

But dating all the way back to January, everybody from strength coach Mickey Marotti to his teammates have acknowledged that Olave was clearly in pain after the loss — but blown away by how it was fueling his already famous work ethic.

“His ability and desire to do something great here, to be part of something great here and really get his degree was emphasized more than ever after his last game down in Arizona,” wide receivers coach Brian Hartline said. “I’m really excited for him. I definitely think there were a lot of challenges for him just learning to become more of a leader and grow, and we’re still talking about a guy who is in his third year.

“Coming out of California, I don’t think he would have thought that in three years he was going to have a decision to make about leaving Ohio State early. His growth has been phenomenal. Really as a person, I love coaching him. We love having him in the room, and I’m really excited that he has a chance to play this fall and doesn’t have to wait further on to do that. He’s maturing, and I think he’s done a great job.”

Olave shot down any notion that he would have allowed the Fiesta Bowl to be his final outing with the Buckeyes, making clear that he hadn’t considered opting out this year to declare for the NFL Draft.

It’s true that a breakout season starting next month could put him in position to eventually make that decision to leave early. But there is unmistakably business that Olave wants to handle with the Buckeyes first.

“It was just a bunch of What Ifs,” Olave said. “What if I didn’t do that or what if we didn’t call that play. But it’s in the past, and I learned from it. It just added another chip on my shoulder, and I’m ready to play.”

The wait to get back on the field has obviously been extended for the Buckeyes thanks to the pandemic. But all that’s done is give Chris Olave more time to get himself ready for the next key moment.

Ohio State wide receivers coach Brian Hartline met with the media along with four Buckeyes before practice on Tuesday. Full comments from Hartline, Chris Olave, Garrett Wilson, Demario McCall and Jameson Williams are available here, and all Buckeyes press conferences can be streamed on the Lettermen Row YouTube channel.